You won't find many countries more like Canada than the Netherlands.

As CAEPLA has reported to you recently the Netherlands government has embraced the United Nations' "2030 Agenda for Sustainable Development."

Part of this green land grab involves taking thousands of farms out of production in order to reduce fertilizer, and thereby, nitrogen use, which environmentalists now claim is causing climate change.

At first it looked like "only" 3,000 farms would be sacrificed in the Netherlands.

CAEPLA's fear is that as the Netherlands go, so goes Canada, too.

Our concern is based on Canada's expropriation regime which has seen farmland taken by government on behalf of the energy transport industry.

CAEPLA has previously explained how the easement on pipeline landowners' property has provided access to First Nations activists.

We believe this same access is the thin edge of the wedge, or the camel's toe in the tent, if you will, for Ottawa's War on Fertilizer.

This latest threat to farmers and ranchers is fundamentally a property rights issue that should concern all landowners, not only pipeline landowners who already understand the government's power of expropriation.

Please share this as widely as possible among your family, friends and neighbours. 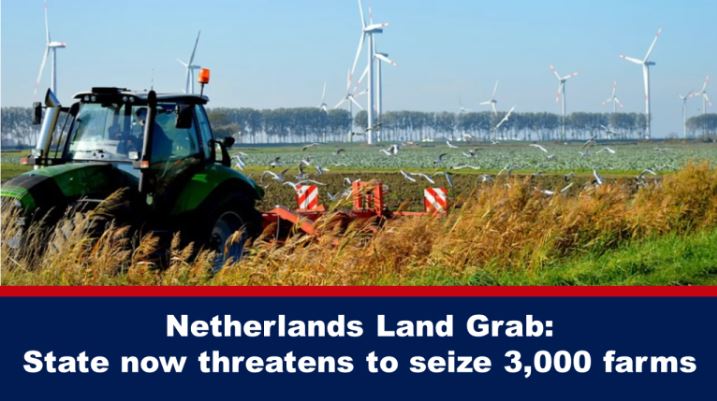 When we published an article on the Dutch government’s land grab in October, the Dutch government was talking about state-forced buyouts of 500-600 farms as early as within the next 12 months.  Now the state is threatening to seize 3,000 farms with an estimated 11, 200 farms having to close in order to meet the new climate goals.

Zimbabwe’s Robert Mugabe would be pleased with the Dutch government’s heist if he were still alive. If you want a peek into what the Netherlands’ future could look like, have a look at what happened in Zimbabwe. If you’re not familiar with the predecessor to the Dutch government’s current actions, you can start researching Zimbabwe’s land grab, officially named “land reform,” by reading our article ‘Farmer Bill and his wife, the private owners of more farmland than anyone else in America’.

Now to return to the current situation in the Netherlands.

What do you do when you are in the middle of an energy crisis and massive inflation causing food prices to go up and up and up?

If you are the Dutch government, then you come up with the genius idea of forcing thousands of farmers to lose their livelihoods and close down!

Yes, the Dutch state has announced that they plan to seize some 3,000 privately owned farms by forcing them to sell their land to the state and then just shut them down.

Farmers and the government have been in dispute for months over the new climate goals that will force thousands of farmers to sell their land to the state.

Now the state has come with an ultimatum – the state will offer some 3,000 farms to money to sell their farms to the state, and if they don’t agree, the buyouts could become compulsory. In other words, the state is essentially seizing the land belonging to farmers.

”These reductions are so severe that those rural communities will be totally devastated economically” said Sander van Diepen, a spokesperson for LTO Nederland.

But this is just the beginning

The farmers have not been reacting all too gladly to this news, with farmers taking to the streets to protest, using their tractors to blockade. The police have already used heavy machinery to tip over tractors with farmers inside. When farmers stood peacefully to protest, police swept in and threw them in black vans.

This isn’t the first time that Dutch police have behaved violently towards peaceful protesters, just a few months ago when tens of thousands of farmers protested, police shot at a farmers kid for seemingly no reason at all other than peacefully driving in his tractor.

And you can never guess what happens next…

The reason for the state planning on essentially seizing farms is because the Netherlands must halve its nitrogen emissions by 2030. Wait a minute now, 2030, where have I heard about that before…

Ah yes, there is something called the Agenda 2030 which is sounds very much like a globalist manifesto. In case you didn’t know, Bill Gates recently committed $1.27 billion towards funding the UN Agenda 2030 Global Goals – and part of that is for global digital ID!

This is all just a part of The Great Reset agenda. I did an in-depth investigation about Agenda 2030 and Bill Gates’ involvement in my previous Substack article HERE.

Many of the farms in the Netherlands are family-run and have been handed down for generations. They survived the German occupation only now to be seized by their own government under the excuse of climate change.

This is tyranny. The last time something like this happened under Mao and Stalin, millions of people died from starvation.

I have said this before and I will say it again. This is Climate Communism.

And just like with the covid lockdown protests, the media has been largely ignoring the massive farmers protest in the Netherlands.

So please share this article everywhere if you support the Dutch farmers!

Peter Imanuelsen, also known as PeterSweden, is an independent journalist reporting on the “real news” that corporate media is ignoring.  The focus of his reporting is liberty and freedom.  You can follow Imanuelsen by subscribing to his Substack HERE.