No More Divide and Conquer

A new alliance of landowners and pro-energy Indigenous leaders

It will be through property rights and respect for all landowners and every Energy Corridor Canadian that we will get energy and pipeline projects built again in this country.

Fossil fuels are being vilified, and it has become almost impossible to get major pipelines and other energy and natural resource projects built today.

And we must all ask ourselves: Why? Oil and gas development and use has proven to be an economic, environmental and human rights revolution. It has lifted people around the world out of poverty and provided those of us in cold northern regions an opportunity to stay warm and eat fresh produce year-round from around the world. How have people come to demonize the very thing that has literally “saved their bacon”?

We have created generations of people who are totally out of touch with survival. It seems obvious the prosperity created by fossil fuels has spoiled Western society and left many disconnected from any concept of what it takes to survive without abundant cheap energy.

We now have modern cities that have fossil fuels to thank for their survival, technological advancement and green status. These cities are concentrations of glass and concrete—with every cubic metre of concrete requiring 2,775 megajoules of energy to create. These same “modern” cities now sue energy companies for the alleged damages of climate change.

Indigenous protesters used by eco-radical NGOs as props to claim they are protecting “Mother Earth” are blocking new gas pipelines and even preventing the replacement of old unsafe pipelines. The same pipelines that were approved by other, directly affected Indigenous bands and their elected officials as an attempt to lift themselves out of impoverishment. Band members and young people are literally dying as they await economic development that can help provide jobs, family income, a sense of pride and something to live for.

As Alberta regional chief Jason Goodstriker says, “the land will give us benefit. (But) everybody saying ‘Mother Earth,’ that’s part of the hippy movement.” Goodstriker and a growing chorus of other Indigenous leaders say, lifting their people out of poverty and addressing serious issues like water quality will only be possible through economic development.

I suggest we all should listen to Ellis Ross, B.C. MLA for Skeena, and a member of Haisla First Nation. He says the only way to address Indigenous poverty issues is through economic development. “Give my people a job and a sense of worth. I am tired of First Nations being used by environmental groups to further anti-developmental causes while my people suffer.”

Chiefs like Goodstriker and Ross recognize the Indian Act is holding Indigenous people back. They have seen and lived it.

We are finally at the point in history where a significant number of Indigenous leaders now embrace economic development. And development of energy and infrastructure like pipelines is increasingly on their economic and political radar.

The National Coalition of Chiefs (NCC) is a prime example of Indigenous people pursuing real change. The NCC was formed recently by Indigenous chiefs and Metis leaders in response to the poverty crisis and social despair that currently exists in their communities across Canada.

NCC is an alliance of pro-development Indigenous people that advocates for the development of oil and gas resources in their communities. Energy development in these communities provides much-needed jobs and opportunities to help defeat on-reserve poverty.

These chiefs, Indigenous entrepreneurs and other leaders are tired of Indigenous peoples being misrepresented as anti-development by special-interest groups.

Responsible resource development, including oil and natural gas development, is seen by the NCC as vital to Indigenous communities’ economies, sustainability, and self-determination.

But how can Indigenous people participate in the energy sector and greater economy when they possess even fewer property rights than other Canadians?

In Canada, property rights are not protected, landowners can be expropriated by Ottawa and the provinces for energy transport projects. Here in Canada, even pipeline companies don’t have property rights—which is why we have seen so many projects strangled by red tape, placed in suspended animation, or killed outright.

CAEPLA sees a lot of promise in this emerging pro-development movement of Indigenous leadership and communities.

Indigenous Communities are Landowners, too

If the pro-development, pro-free enterprise Indigenous leadership we see coming into its own today can also achieve greater sovereignty and demand property rights, there is a tremendous opportunity for Indigenous communities to join with the broader landowner movement.

Instead of having green extremists, politicians and regulators pit Indigenous people against farmers, ranchers and other landowners, we might instead one day soon join together to secure property rights for every Canadian.

It will be through property rights and respect for all landowners and every Energy Corridor Canadian that we will get energy and pipeline projects built again in this country.

It will be the grassroots organizations, including and especially the Indigenous communities, which will reboot the Canadian economy through respect for property rights and a free market.

CAEPLA welcomes the emergence of the NCC and its pro-energy, pro-development program. Together we will work with Energy Corridor Canadians and industry to resurrect the energy transport sector—and the Canadian economy.

We hope you’ll join us. 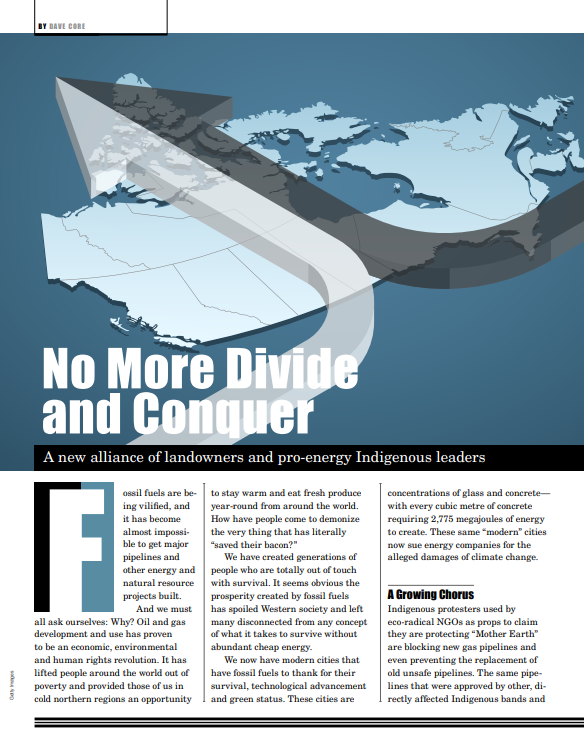 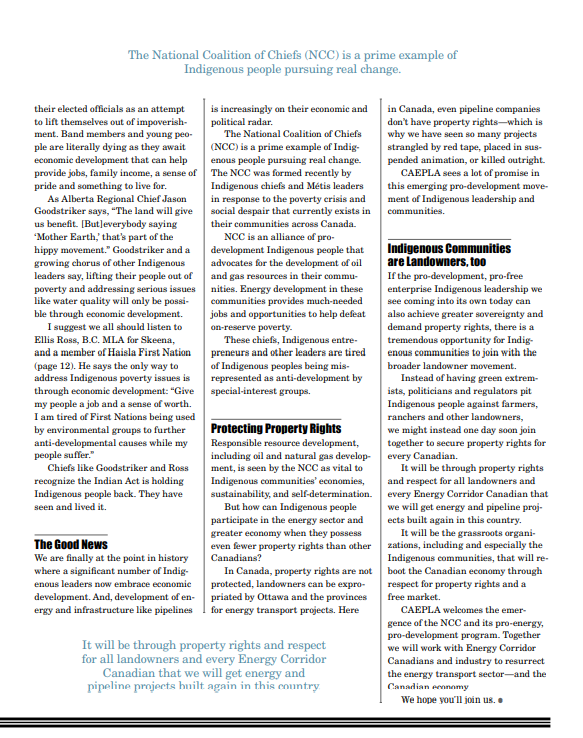