An Indigenous chief turned MLA explains how it works

By Ellis B. Ross

"While the rest of Canada enjoyed the wealth of her resources, Natives were intentionally held back under policies of the Indian Act".

In 2004, as an elected member of the Kitamaat Village Council, I couldn’t get anyone to describe Aboriginal rights and title to me, so I started to read rights and title case law. I did this mainly because I saw no solutions in fighting the Indian Act or even negotiating a treaty under the British Columbia Treaty Process.

I had goals of independence. I badly wanted our people out of poverty but everything I tried, failed.

It was at that point when I first came across the word “reconciliation.”

I grew up around animosity towards the “white man” and government, so it was a surprise to see a judge talking about our need to reconcile “because let’s face it, none of us are going anywhere.” Even back then, as today, I thought this was a profound and powerful statement and objective.

After exploring political definitions of reconciliation that didn’t lead anywhere, I came to believe that true reconciliation was to bring two groups back together for the common good.

With this belief, I started to discount what I didn’t see as true reconciliation. For example, I couldn’t see cash payment for a past wrong as reconciliation, but more as a form of restitution or compensation. Maybe it brought light to a past situation, but it didn’t bring Native and non-Native societies back together.

As I opened my eyes, I couldn’t help but notice that reconciliation was already around us on a daily basis. The only problem being that it was one-sided.

Natives, on one hand, are almost fully integrated into today’s society in terms of living with the conveniences of the 21st century including newer forms of boats, houses and laws—all things that helped to increase our quality of life. On the other hand, we were still being excluded from Canada’s economy.

While the rest of Canada enjoyed the wealth of her resources, Natives were intentionally held back under policies of the Indian Act and indeed the mentality of all levels of government whether it be municipal or provincial.

This all changed in 2004, with the Haida court case decision on the duty to consult, and where appropriate, accommodate First Nations. [Duty to consult] is when the Crown is aware of a decision that may infringe on asserted rights and title of a First Nations community.

For a band like mine—Haisla Nation near Kitmat—that didn’t really want shared decision making, but wanted our interests included before the decision was made, it was like a dream come true.

It takes tremendous commitment, and involves hiring capacity if you don’t have it, but the return has the potential to help fix a problem that nobody else has been able to fix: the conditions of the Canadian Aboriginal stuck in a cycle of poverty and unemployment and all the associated social ills.

For our band, the idea of being included as a means to address our social ills moved from theory to reality when our people started working at meaningful jobs. Our band council began receiving non-Indian Act funds that they, in turn, used to help their membership (including off-reserve members). We were also able to build our own infrastructure.

This was our band’s goal on two counts: a share and a say and being able to address our own issues on our own terms.

If our efforts aren’t helping our band members get out of these horrible social conditions, the conversation around the term reconciliation is useless.

The LNG pipeline opportunities—LNG Canada and KMLNG, both with terminals in Kitimat—that included government and industry collaboration did everything I heard my people demand for the past 20 years.

We want to be part of the decision making on the land. Done.

The land should continue to help sustain us in today’s context. Done.

We should be included in today’s economy. Done.

We should be working on a path toward independence. Done.

We should be able to be in a place where we can address our own issues on our own terms. Done.

We want to stop begging for help in our own territory. Done.

And most importantly, in my eyes, we want our kids and grandkids to have meaningful employment so they can have enriching lives.

We’re off to a good start, and I’d say we’re halfway there.

This was all made possible by opening ourselves up to new ideas, taking risks and understanding that being the “angry aboriginal” doesn’t achieve anything for our people.

And all of this achievement was possible without signing a treaty or going to court to define our title.

I believe if the B.C. model for the LNG projects had been the approach followed for Northern Gateway, things might have been different.

Even the Feds had no idea how to consult. Unfortunately, by the time I got ahold of the file, it was too late.

Ellis Ross was elected to the Legislative Assembly of British Columbia in the 2017 provincial election and represents the electoral district of Skeena as a member of the British Columbia Liberal Party caucus.

Prior to his election to the legislature, Ross was the chief councilor for the Haisla Nation. In 2006, he signed a $50 million agreement with Kitimat LNG to build a liquid natural gas plant on one of the Haisla Nation reserves. Ross also did survey work for the Department of Fisheries and Oceans, then went into business with his brother doing hand logging and salvage log beachcombing. He also ran a charter boat. Ross was awarded the Order of British Columbia in 2014. 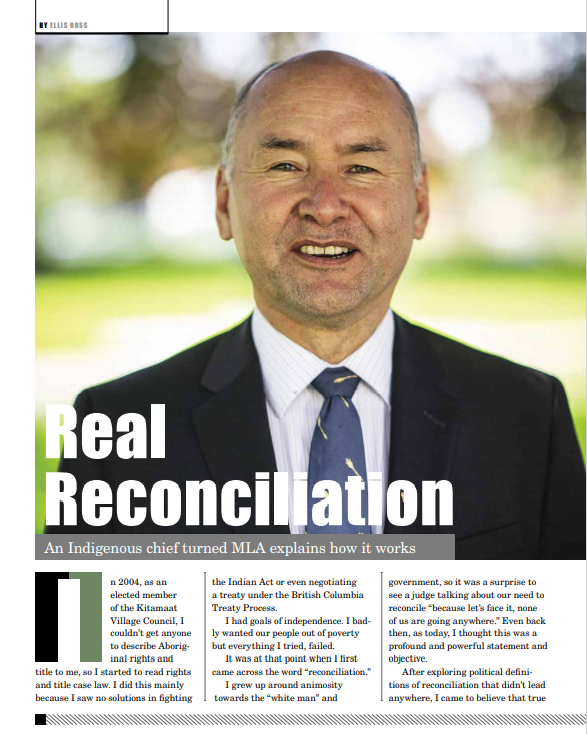 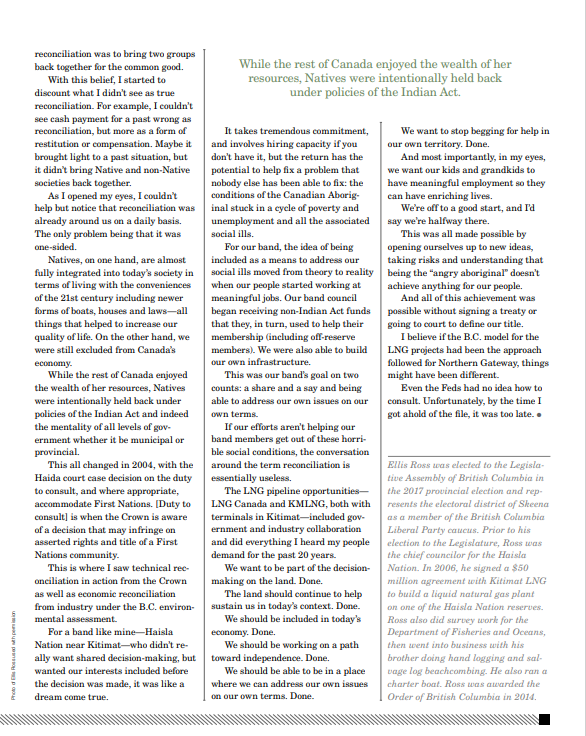