"Those who find themselves hosting an unwanted transmission line or other infrastructure on their property are locked into a permanent relationship with a hostile partner sharing the rights to their land."

"One of the benefits of private property rights is it encourages people to become better informed about the decisions that affect them directly. Eminent domain undermines these incentives and encourages conflict rather than compromise."

As fracking has lowered the price of natural gas, the pipelines required to bring the gas to market have, predictably, been a recurring source of conflict, particularly over the potential environmental impacts.

Those conflicts have been exacerbated by the use of eminent domain to build the pipelines despite the objection of property owners.

To some extent, this latest of round of conflict over eminent domain was inevitable. In 2005, the United States Supreme Court’s controversial Kelo decision held that the U.S. constitution’s Takings Clause permits governments to take private property to give it to another private party if the government believes it could increase tax revenues or contribute to economic growth, notwithstanding that the clause limits takings “for public use.”

Kelo, by favouring theoretical tax revenues over the wishes of property owners, introduces an anti-conservation bias into the Takings Clause. And it’s important to emphasize theoretical. In Kelo, the Supreme Court approved the taking and demolishing of a residential neighbourhood to give the land to a giant pharmaceutical corporation.

But 10 years later, long after the community was kicked out, the land sat vacant and the company had moved on.

Kelo makes pipeline takings worse by elevating the pipeline company’s private profit to public use, relieving the government of any obligation to ensure that the particular project is a good idea or to oversee the exercise of eminent domain for it.

In fact, in many pipeline takings cases, the government isn’t even directly involved. Instead, it delegates the eminent domain power to the private company to exercise as it sees fit.

Consequently, the easements that are imposed on property owners for pipeline construction are not the fair consequence of arms-length negotiation or even a political compromise by a (hopefully) neutral government actor. Instead, one party to the easement gets to set its terms and impose them on the landowner, regardless of what she thinks about them.

Andrew Morriss’s description, in a recent PERC Reports (see Eminent Domain and Powerlines, Pipeline Observer Summer 2016), of his family’s experience with a transmission easement explains how this causes the easements to be one-sided.

Unlike landowners who are forced to sell their property outright, those who find themselves hosting an unwanted transmission line or other infrastructure on their property are locked into a permanent relationship with a hostile partner sharing the rights to their land. Eminent domain law provides no safeguards to address these problems.

Unfortunately, my family is developing first-hand experience with the issue, as the Lower Colorado River Authority (LCRA) used its eminent domain power to take an easement across my in-laws’ ranch for a high-voltage transmission line that carries wind-generated electricity from the Texas Panhandle to central Texas.

None of the landowners along the LCRA line had any say in the terms of the easement or any recourse to contest any term other than the price paid for the land. Just 50 kilometres away, Florida Power and Light (FP&L) built a parallel transmission line to do the same thing. But because FP&L lacks the power of eminent domain in Texas, it had to negotiate with the landowners along its route.

The terms of the FP&L and LCRA easements are strikingly different, illustrating the problem with substituting involuntary takings for arm’s-length bargaining.

The usual justification for eminent domain—the so-called “holdout problem”—doesn’t appear to explain the opposition to these forced easements. According to the holdout problem, eminent domain is necessary to construct large projects because, without it, a single property owner can use her veto to demand a disproportionate payment.

If you’re building a highway, for instance, and you have all of the rights you need to build it except the right to a single property, the owner could demand a huge windfall because her land is necessary for the valuable project.

Instead, the opposition seems most concerned with potential environmental impacts. Those fears are likely overblown; blocking a pipeline isn’t going to change demand for fossil fuels and may push transportation of fuels to less-safe alternatives. But one of the benefits of private property rights is it encourages people to become better informed about the decisions that affect them directly. Eminent domain undermines these incentives and encourages conflict rather than compromise.

A pipeline easement that was negotiated at arm’s length might allow the pipeline to go forward, but with more protections for the landowner in case of spills or other accidents. But the delegation of eminent domain to a private corporation makes these compromises much less likely. That leaves the landowner with only the option of stopping the pipeline, which explains the increasing conflict. 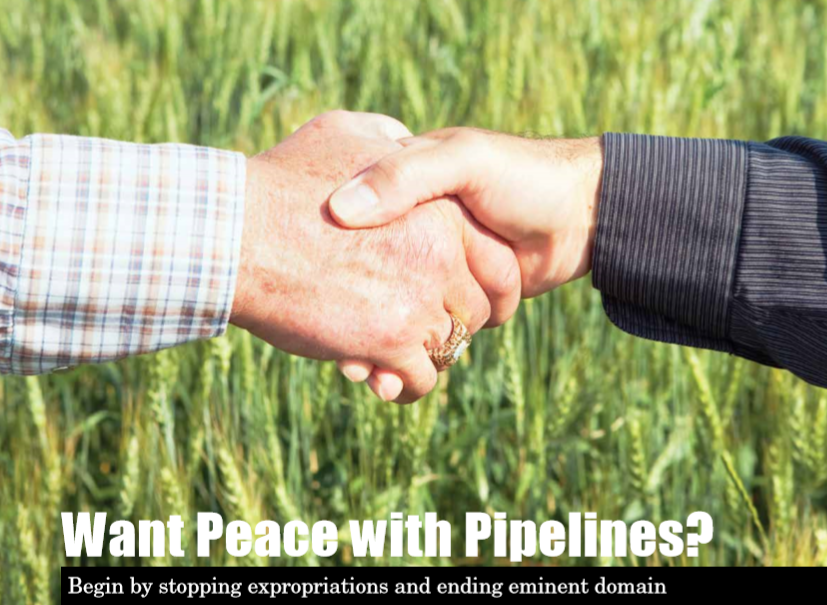 Jonathan Wood is an attorney at Pacific Legal Foundation (PLF), an adjunct fellow at the Property and Environment Research Center (PERC) and a member of the executive committee for the Federalist Society’s Environmental Law and Property Rights Practice Group.