The Supreme Court’s 2005 Kelo v. City of New London decision, which allows a city to use its power of eminent domain to redistribute property in pursuit of economic development drew widespread public opposition, set off what Professor Nicole Garnett termed “a firestorm of popular outrage.” It also prompted many states to adopt measures limiting the use of public domain for such purposes.

Now, the development of both renewable and unconventional fossil fuel energy sources are raising eminent domain issues again, as utilities use state grants of eminent domain power to take land for transmission lines and pipelines. These takings pose even greater challenges than the blatant rent-seeking property owners faced in cases like Kelo.

Unlike landowners who are forced to sell their property outright, those who find themselves hosting an unwanted transmission line or other infrastructure on their property are locked into a permanent relationship with a hostile partner sharing the rights to their land. Eminent domain law provides no safeguards to address these problems.

Unfortunately, my family is developing first-hand experience with the issue. The Lower Colorado River Authority (LCRA) used its eminent domain power to take an easement across my in-laws’ ranch for a high-voltage transmission line that carries wind-generated electricity from the Texas Panhandle to central Texas.

None of the landowners along the LCRA line had any say in the terms of the easement, nor any recourse to contest any term other than the price paid for the land. Just 30 miles away, Florida Power and Light (FP&L) built a parallel transmission line to do the same thing. But because FP&L lacks the power of eminent domain in Texas, it had to negotiate with the landowners along its route. The terms of the FP&L and LCRA easements are strikingly different, illustrating the problem with substituting involuntary takings for arm’s length bargaining.

“Most states’ eminent domain laws were built around models from the 1930s and 1940s.” — ANDREW P. MORRISS

The landowner, for example, loses control of the right of access to the property, because the utility has the right to enter the land without notice to construct and maintain its transmission line. For a landowner earning income from leasing hunting rights, this is significant because utility operations disrupt hunting, which lowers the value of the leases. Transmission line easements are not just unsightly wires—they require regular access by utility workers, give off a loud buzzing noise, can shock livestock and people, and ruin scenic vistas.

Easements were developed by the common law as a way to enhance property values. Real estate developers often use them to distribute rights among the parcels within a development to provide access to shared amenities such as a park, beach, or trail, or to preserve important features by restricting the type of development subsequent landowners can do. Most residential construction in the United States is subject to such privately agreed-upon restrictions.

The crucial difference is that these restrictions are the result of either negotiation between property owners or by developers seeking to maximize the total value of their land. A restriction on a parcel will be imposed only if the increase in value to the other parcels is greater than the reduced value of the restricted parcel. When an easement is taken by eminent domain, there is no such constraint.

Most states’ eminent domain laws are built around models from the 1930s and 1940s. The majority of takings were for things such as highway or school construction, in which the landowner was not forced into a long-term relationship with the entity taking his or her land. Even for things like transmission lines, landowners were often thrilled to be in an area gaining electrical service.

Today’s infrastructure projects are both more intrusive—larger, higher voltage, etc.—and more contested in their benefits. For example, the benefits of Texas’ state-supported expansion of wind energy are hotly contested by those who doubt the benefits of massive investments in alternative energy. On the other hand, expanding pipelines to increase unconventional oil and gas supplies is opposed by environmentalists.

Gifting utilities with the power to seize private property only exacerbates conflicts. As the FP&L line in Texas clearly illustrates, utilities are capable of building infrastructure without the power of eminent domain through voluntary market transactions. Why aren’t all such projects done in the same way?

Andrew P. Morriss is a senior fellow at the Property & Environment Research Center (PERC), a nonprofit free-market environmental research institute located in Bozeman, Montana. Learn more at perc.org. Morriss is also dean of the Texas A&M law school and the author or co-author of more than 60 chapters, scholarly articles, and books. 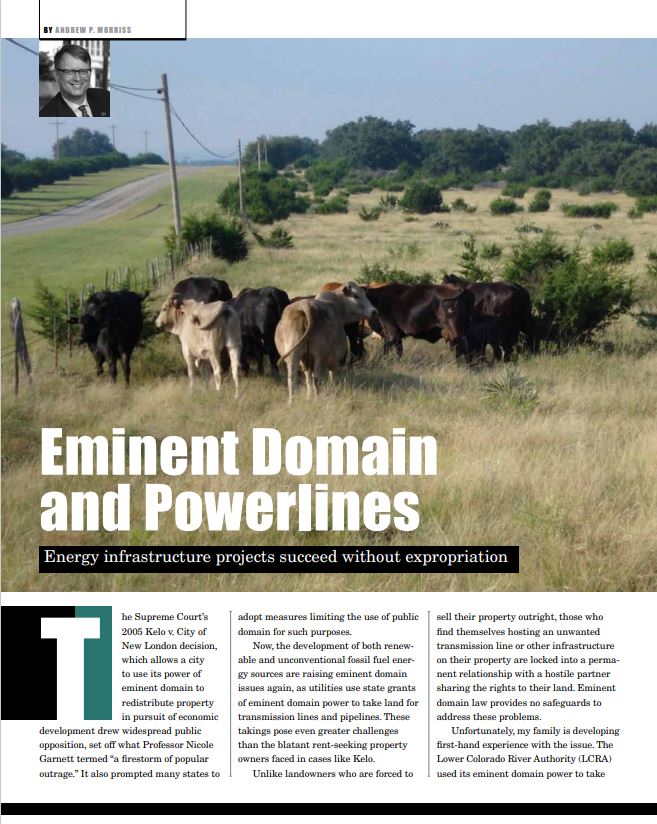 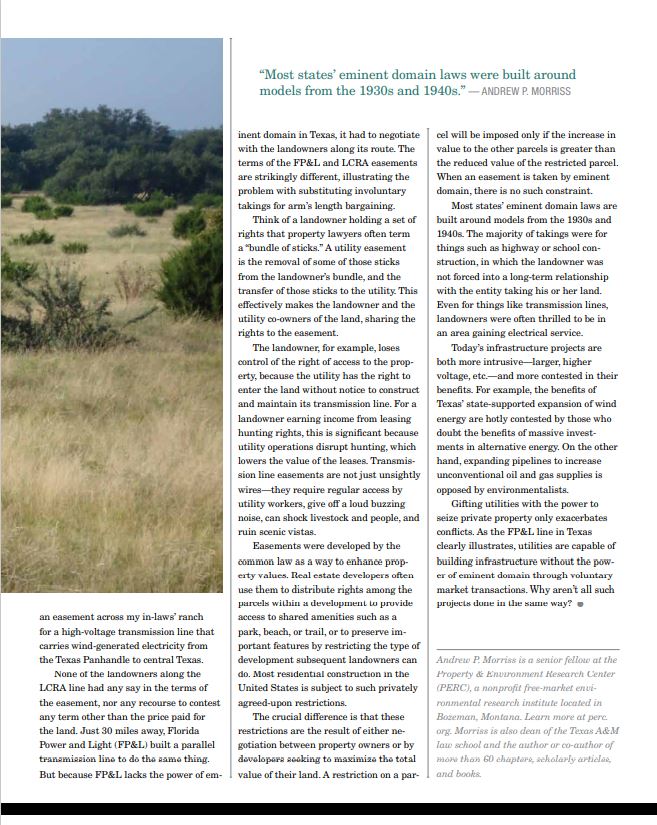