The 15th Anniversary of Kelo v. City of New London

Today is the anniversary of one of the most controversial - and most unpopular - property rights decisions in the history of the Supreme Court.

Today is the 15th anniversary of Kelo v. City of New London, one of the most controversial property rights decisions in the history of the Supreme Court. Although the Fifth Amendment only permits the taking of private property for "public use," the Court ruled that the transfer of condemned land to private parties for "economic development" is permitted by the Constitution—even if the government cannot prove that the expected development will ever actually happen. Building on earlier decisions such as Berman v. Parker (1954), a closely divided 5-4 majority ruled that virtually any potential benefit to the public qualifies as a "public use." This broad interpretation of "public use" is at odds with the original meaning of the term, which holds that a public use only exists if the condemned property is transferred to government ownership (as in the case of public infrastructure such as roads and bridges) or a private owner that is legally required to serve the entire public, such as a public utility or common carrier.

In my book about the case, and in other writings, I have argued that Kelo was wrongly decided from the standpoint of leading versions of both originalism and living constitution theory. The majority opinion by Justice John Paul Stevens also includes a number of significant errors that cut across competing schools of constitutional theory.

After retiring from the Court, Justice Stevens—to his credit—actually admitted he had made an "embarrassing to acknowledge" error in his interpretation of precedent; he even generously cited me as a "scholarly commentator" who "caught this issue shortly after we decided Kelo," in an article I published in 2007. I should emphasize that Justice Stevens continued to believe he got the bottom-line decision right, albeit his new rationale for it was completely different from that defended in the majority opinion. Regardless, there aren't many major Supreme Court decisions where the authority of the majority opinion actually admitted he made a serious error in his analysis.

While Kelo was a defeat for property rights advocates, it also broke the previous seeming consensus in support of a very broad interpretation of "public use" within the legal community. Thanks to the forceful dissents by Justice Sandra Day O'Connor and Clarence Thomas, those—like myself—who favored a narrow interpretation of public use, could no longer be dismissed as extremists or ignoramuses. Since Kelo, the meaning of "public use" has once again become a focus of debate within the legal community. As I see it, advocates of the "narrow view" have been gaining ground, though we certainly haven't won anything like a definitive "victory."

In addition to the controversy Kelo generated among lawyers and legal scholars, the decision is also notable for generating a broader political backlash than virtually any other Supreme Court decision in modern history. Polls showed that over 80% of the public disapproved of the Court's ruling. This was a rare issue on which Rush Limbaugh, Ralph Nader, libertarians, and the NAACP were all on the same side. One of the very few defenders of the ruling was a certain  Donald Trump, who said "I happen to agree with it 100%."

In the aftermath of Kelo, 45 states passed eminent domain reform laws—more state legislation than has ever been enacted in response to any other Supreme Court decision. Several state Supreme Courts issued rulings holding that Kelo-like "economic development" takings were forbidden by their state constitutions.

Unfortunately, much of the new legislation was largely ineffective—enacted to allay public anger without actually doing much to limit takings. Nonetheless, there can be no doubt that, as a result of Kelo and the reaction it generated, property rights are far better protected than they were before. Some twenty states did enact reforms that meaningfully constrained eminent domain (even if not always as much as would be ideal), and several state supreme courts strengthened judicial scrutiny of public use issues. In addition, as discussed in greater detail in my book, the controversy generated by Kelo makes it more likely that the Court will eventually limit or overrule the decision. Kelo has many of the characteristics of Supreme Court decisions overruled in the past, and well fits the Court's own—admitted vague—criteria for overruling precedent. Among other things, the ruling has serious flaws in its reasoning, it has been widely criticized, and it is inconsistent with the way the Court interprets most other constitutional rights.

In the years since Kelo, controversy over eminent domain abuse has expanded from "economic development" and "blight" condemnations to include such questions as pipeline takings, and Donald Trump's efforts to use eminent domain to build his border wall. While each of these situations  raises some unique issues, all involve efforts by the government to seize private property for dubious purposes that are  likely to destroy more economic and social value than they create. All also tend to disproportionately victimize the poor and politically weak.

Back in New London, where the Kelo case originated, the condemned property—on which fifteen homes once stood—remains empty, used only by feral cats. The economic development project for which the homes were taken was a dubious proposition to begin with, and eventually fell part. Despite a variety of proposals since then, the City of New London still has not been able to find a productive use for the land.

To my knowledge, little has changed on the site since I took the above photo in 2014, and pieces of what had been the foundation of Susette Kelo's house were still lying on the ground (I have to admit I took two small pieces for myself).

In 2018, filmmakers Ted and Courtney Balaker released Little Pink House, an excellent movie based on the case, which I reviewed here. For understandable dramatic reasons, the movie—like much of the  media coverage of the litigation –  focuses mostly on Susette Kelo, the plaintiff who was listed first, and thereby gave her name to the case.

In the process of writing the book, I interviewed most of the other participants in the case, as well. Sadly, their names are known only to those who have closely studied the case. But it's worth remembering that they, too, went through a painful ordeal. I describe some of it here, and in greater detail in my book:

The multiyear legal and political battle over the takings was an excruciating ordeal for those involved. As Richard Beyer told me in an interview, he and the other property owners felt as if they were "living in our own prison" during the "whole period" of litigation….

The focus on Susette Kelo is understandable. But it comes at the cost of downplaying the stories of the others, some of whom probably suffered even greater anguish than she did. For example, Wilhelmina Dery, who was in her eighties, had lived in the same house her whole life, and adamantly refused to leave. The Cristofaro family were also strongly attached to their property, which they had purchased decades earlier after their previous home had been condemned as part of an urban renewal project. Both Wilhemina Dery and Margherita Cristofaro passed away during the course of the litigation. Relatives believe that their deaths may have been hastened by the stress of the ongoing legal battle.

As depicted in the movie (which, however, does not show the full extent of it), both those owners who filed a lawsuit to block the condemnations and others who sold "voluntarily" also endured a prolonged campaign of extralegal harassment intended to pressure them into giving in. These shenanigans included such tactics as menacing late night phone calls, dumping of waste on the resisting owners' property, and locking out tenants during cold winter weather.

As bad as the Kelo experience was for the victims, it did bolster the cause of property rights in the United States, and to some extent, even around the world. The case helped highlight abusive takings and land seizures as far away as China and Korea. A recent decision by the Israeli Supreme Court offers a narrow interpretation of Kelo, so as to avoid having to use it as a precedent justifying the expropriation of Palestinian property for the purpose of facilitating its use by Jewish settlers on the West Bank.

The fact that Kelo still resonates in places as far removed from New London, Connecticut as China and Israel is a testament to the powerful impression the case made on so many people. Hopefully, the time will come when no one has to endure such abuses of power ever again. 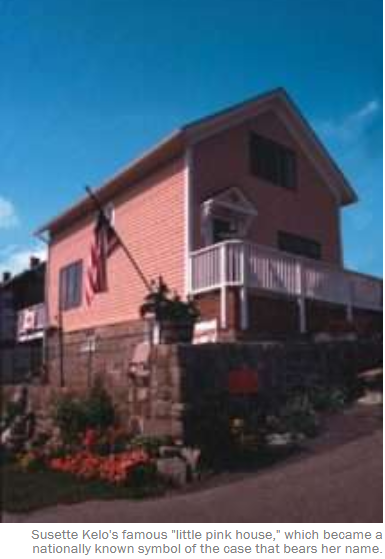