This drama about regular people fighting against political and corporate interests that want to take their property will be all too familiar to landowners.

“The movie is effective in subtly capturing the importance of property rights without making its case explicit in those terms.”

“Kelo’s side argues that eminent domain should never be used for private use, only ‘public benefit.’ This is the chink in their armour.”

A lot of Western films involve expropriation and property rights, often culminating in gunfights against crooked sheriffs and land surveyors. A quiet drama about these issues might be a tough sell.

But Little Pink House is a strong, simple film about the underappreciated issue of expropriation (or “eminent domain” as they call it in the United States). It’s not a legal thriller with slick lawyers facing off. It’s a biographical drama about regular people fighting against political and corporate interests that want to take their property.

This film dramatizes the story behind the significant Kelo v. City of New London case heard by the U.S. Supreme Court in 2005. The decision in this case permitted a Connecticut city (New London) to condemn private property so that it could be transferred to another private party for “economic redevelopment.”

If this sounds familiar, it’s basically the same issue many landowners deal with when pipeline and utility companies roll in wanting to use their property for “the public interest.”

Susette Kelo (sympathetically played by Catherine Keener) has bought an old house in New London that she renovates and restores (along with hard work itself, she gets sprayed by a skunk along the way). She paints the house pink (or “Odessa rose,” she tells a friend) which gives the film its namesake. The nearby sewage treatment plan stinks up the neighborhood a bit, but Kelo’s nice view of the river is a worthy trade-off.

Early scenes paint a clear picture of life in a small, economically depressed town. Kelo works as an EMT and she seems personally acquainted with everyone. One resident jokes that she’s got the only job with any future prospects because most of the townsfolk are so old.

The town feels tired as you follow Kelo around during the introductory scenes. There isn’t much going on. There are shots of rundown buildings in the city centre. A scene in a deli where Kelo is the only customer (the deli owner later confesses he can barely cover his payroll). A radio host in the background talks about the region’s bad economy and recessionary conditions.

Kelo has a relationship with Tim, the local antiques dealer. He tells her he loves her, but she just wants to be friends. She tells him she wants things to “stay as they are,” which parallels her upcoming fight against the forces of “progress.”

Meanwhile, Connecticut’s Republican governor is running for re-election. He is rather popular even with Democratic voters. He wants votes in New London and his plan is to bring jobs by redeveloping the land around the old sewage treatment plant. He yearns for a headline that says, “Republican governor revitalizes blue collar Democrat town.” His motivations are entirely political and he is portrayed as callous and unsympathetic.

He recruits a well-connected local college president, Charlotte Wells (played by Jeanne Tripplehorn), to head the New London Development Corporation (NLED), to “independently” push for a project with pharmaceutical giant Pfizer (famous for Viagra). Pfizer is only interested in locating a facility there if it gets free land and if the government will clean up the ugly old neighbourhoods nearby. This requires major redevelopment and means the state needs to use eminent domain powers to expropriate property from the current residents.

NLED informs residents that their homes have been “designated for the redevelopment,” and they are being offered “fair market value” for their homes. Many residents are happy to sell, but seven — including Kelo — hold out. They refuse to sell despite being offered “significantly more” than the value of the property. The NLED agents are baffled that someone might value their property beyond what is reflected in its “market value.” But as one man points out earlier in the movie, where else can a guy work 40 years as a bus driver then comfortably retire somewhere with such a great view?

The film is effective here in subtly capturing the importance of property rights without making its case explicit in those terms. Owning something isn’t equivalent to receiving a payment equal to its supposed “fair market value.” Money can’t replace homes and memories and the unique connections we feel to places that are special to us. Many philosophers, from Locke to Hegel, have discussed the importance of property to the human condition. Using our labour to transform land and resources puts a part of us into those things. It makes those external things extensions of ourselves.

Little Pink House also shows political awareness during a scene where the head of NLED tries some “community engagement” to counter the Kelo anti-expropriation campaign.

The filmmakers recognize that this is part of the democratization and manipulation process. When a decision has been made, hold some phony town hall discussions to give people the illusion that their opinions are important (spoiler alert: their opinions are not important). When her pleas for “reasonableness” are rebuffed by the straightforward arguments of angry townsfolk, the land grabbers’ spokeswoman resorts to pedantic sloganeering that would make Justin Trudeau himself cringe.

A legal advocacy group takes Kelo’s case all the way to the U.S. Supreme Court where they meet their final defeat. Kelo’s side argues that eminent domain should never be used for private use, only “public benefit.” This is the chink in their armor easily exploited by the city lawyers.

They argue that private use represents a public benefit if it would generate more tax revenue, shamelessly admitting that poorer people don’t produce much tax revenue and so it is reasonable to expropriate their property. The Supreme Court basically accepts this argument.

With that defeat, Kelo and the other hold-outs lose their homes.

But perhaps the ultimate insult is disclosed at the end of the film. Despite the merciless eviction of several families from their property, the planned redevelopment never actually happens. To this day, the land remains an undeveloped lot where a little pink house once stood. The Pfizer facility closes down when its tax breaks expire 10 years later.

Overall, this is a strong film that effectively examines issues dear to readers of Pipeline Observer. The key lesson is this: “Fair market value” is meaningless in the absence of voluntary exchange.

An “offer you can’t refuse” can never be a fair deal.

Little Pink House is available on Netflix and Amazon Prime. 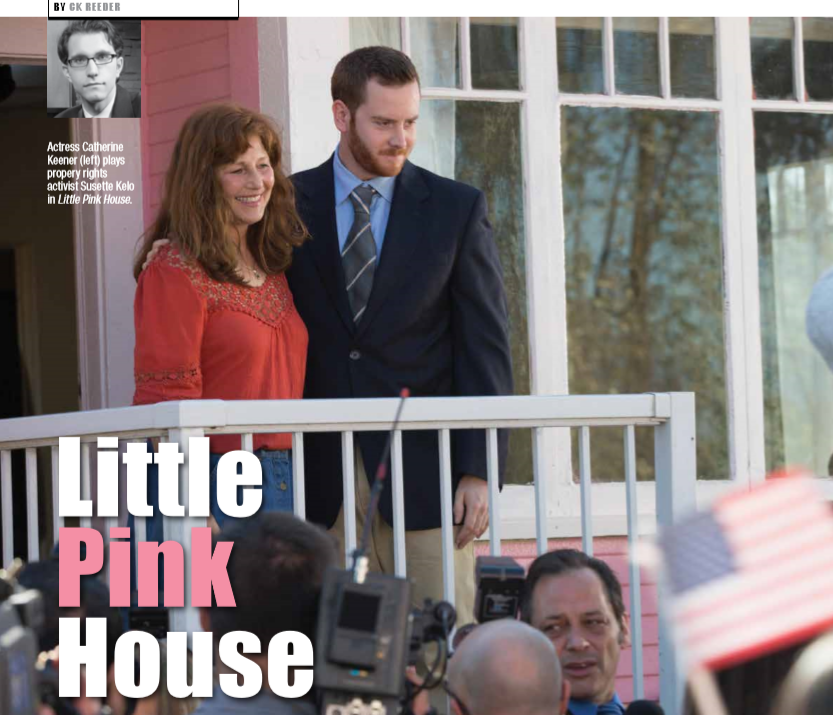