I am writing to share with you my recent experiences with the Land Values Appraisal Commission (LVAC) process — a road we may have to go down if we are not successful in getting Manitoba Hydro to the negotiation table in regards to the BiPole III expropriation.

But before the BiPole lll boondoggle, there was the "Red River Floodway Expansion Project" the Province of Manitoba initiated in September 2008.

On February 26, 2009, the Province informed me that they would expropriate land from me for the Red River Floodway West Dyke Expansion project — also known as the Z Dyke.

Just like Manitoba Hydro did in the case of BiPole III, the province gave me a lowball offer back in April of 2009 hoping I’d settle quickly.

I refused their offer and made my formal application to the LVAC on May 17, 2010.

You may be surprised to find out that after eight years since the floodway expropriation, the province only now appears to be seriously interested in settling the matter with me without going to a LVAC hearing.

Take Note:
Don’t let your lawyer pressure you to set down a date for a LVAC hearing on BiPole III. The “injurious affections” from BiPole III are extremely complex which makes the selection of a qualified expert even more important. Especially because once you are at a LVAC hearing you have no choice but to accept their decision. There is no chance of appeal as the LVAC ruling is final.

Why am I sharing this information with you?

First and foremost, to let you know the truth about the LVAC process that lawyers are not telling you.

I have heard of some landowners being misled by both their lawyers and Manitoba Hydro that LVAC will be a quick process and that it will provide you with fair compensation for BiPole III.

That is simply not true. You are being completely misled. I am speaking from personal experience when I tell you that LVAC is a very complex and open-ended process.

I have been dealing with LVAC for eight years now on the floodway expropriation which alone shows it is not a quick process — unless of course you’re willing to accept their low-ball offers.

Second, when it comes to LVAC, the simple fact is that the longer we hold out the better a settlement we will be able to negotiate in the end.

Third, when it comes to the LVAC process, there is strength in numbers.

Even though there are just four of us landowners still holding out on the Floodway Expropriation, we have been learning a great deal from each other, especially when it comes to the meaning of "injurious affection" and how it can be applied to our individual farm operations under the Expropriation Act.

Here is what Section 30(1) of the Expropriation Act states:

(a) any reduction in market value of the remaining land of the owner caused by the expropriation of the part;

(b) the damages sustained by the owner as a result of the existence and the use but not the construction of the works upon the part of the land expropriated; and

As you can see, “injurious affection” as set out under the Expropriation Act is a very complex concept with several components to it in terms of how it applies to a farm operation now impacted by the existence of a power line.

For example, the first component, or 30(1)(a), provides a landowner a claim for compensation for the reduction in the market value of the remaining land that is negatively impacted by the existence of the transmission line.  The fact is that until the line is removed, it will have a negative impact on the land’s value, which is an economic loss.

In regards to 30(1)(a), I have recently been made aware of a very important court case in Alberta regarding injurious affection compensation for the negative economic impact on the remaining land. (editor’s note see “What Remains: Expropriation Also Impacts the Value of Land Not Taken”, by John Goudy)

The decision will inform you so that you can start to think about the negative economic impacts of a power line such as BiPole III bring to your and your neighbours’ property.

The second component of “injurious affection”, or section 30(1)(b) under the Act, provides you the right for a claim for compensation for the financial costs you suffer from working around the BiPole III towers. Your operation will be facing increased costs due to restrictions regarding aerial spraying, changes to your farming practices, loss of GPS signal, increased liability issues and the reduced value of the land on the easement.

The third component, or section 30(1)(c) provides the right to claim for other damages that may be unique to your particular farming operation.

All this information may seem overwhelming to you. If that is the case, you are not alone — it took me eight years to get my head wrapped around this in the case of the land that was expropriated from me for the Z dyke. My intent is not to overwhelm you but rather to point out the complex nature behind “injurious affection” compensation.

So now you may be thinking how do I best deal with this?

In the case of the Floodway expropriation, I have learned that qualified expert reports become extremely important during the expropriation proceedings under LVAC. This will be even more important in the case of the BiPole III project as there will be many unforeseen operational and legal liabilities that will be imposed on us.

Finally, and perhaps most importantly, don`t let your lawyer pressure you to set down a date for an LVAC hearing on BiPole III. The "injurious affections" from BiPole III are extremely complex which makes the selection of a qualified expert even more important. Especially because once you are at a LVAC hearing you have no choice but to accept their decision. There is no chance of appeal as the LVAC ruling is final.

Over the past three years Manitoba Hydro has used the 'divide and conquer' tactic to get landowners to sign their flawed BiPole III easement agreement.

And the Pallister PC government has done nothing to give us a fair deal.

In fact, they have shown that they are even worse than the NDP. At least the NDP didn`t hide the fact that they didn't care about us. But “lyin’ Brian” and “betrayin’ Blaine” only pretended to care long enough to get into power. Now they couldn't care less about us.

And so it will be even more important to regain solidarity among all landowners impacted by BiPole III, regardless of whether you've signed an easement with Hydro or whether you are still holding out for negotiations.

The more of us that can come together again and rally behind one expert and one lawyer, the more leverage we will have when it comes to negotiating with the province under the LVAC process.

Jürgen M. Kohler farms near Brunkild, Manitoba, and is chair of The Manitoba BiPole Landowners Committee (MBLC), a CAEPLA affiliate.

Jürgen can be reached at [email protected] 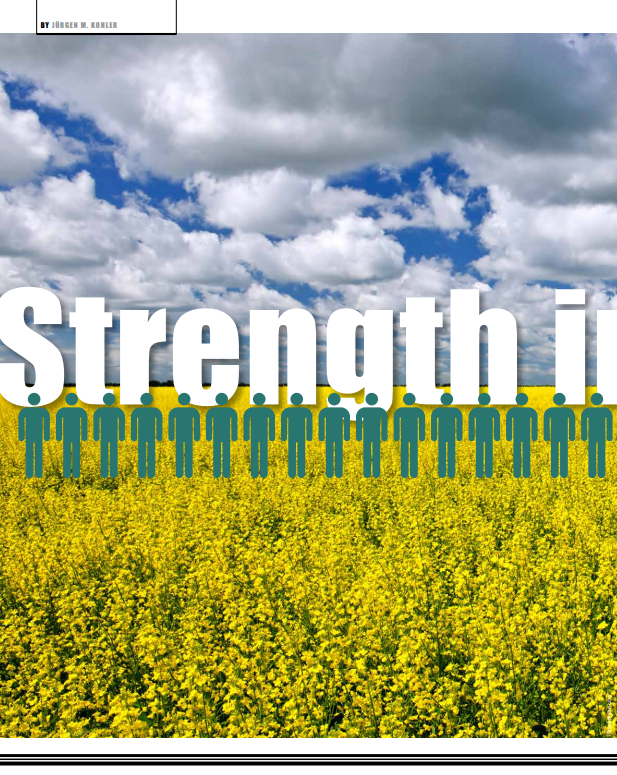 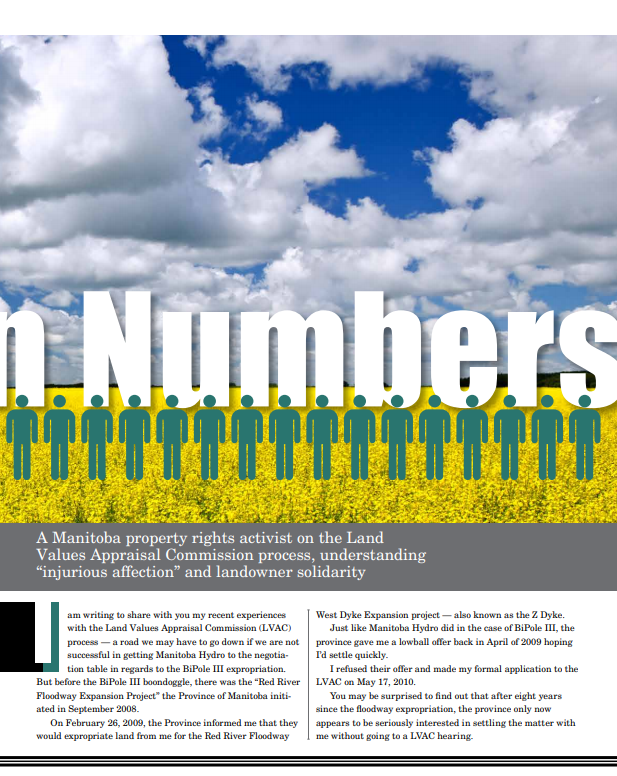 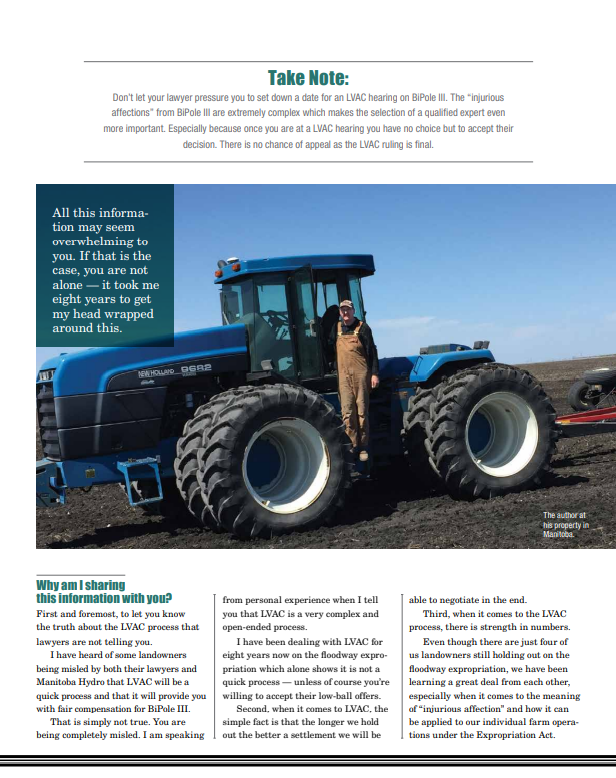 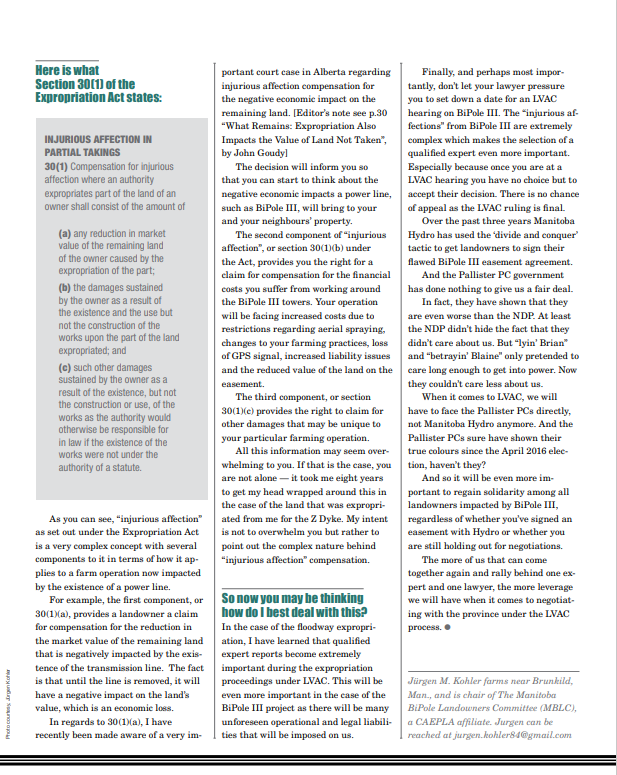