Expropriation Also Impacts the Value of Land Not Taken

AltaLink expropriated a right-of-way over a strip of land from an Alberta couple for an electrical transmission line.

In a compensation hearing before the Alberta Surface Rights Board (the "Board"), the owners were denied compensation for “injurious affection.” The injurious affection they claimed was a loss in value of the remainder of their property that was not taken by AltaLink. The owners appealed the Board's decision to the Alberta Court of Queen's Bench and, on appeal, the Court reversed the decision of the Board and awarded the owners $125,780 in lost value plus interest.

The land in question consisted of two adjacent parcels containing approximately 230 acres, of which approximately 121 acres were cultivated. The owners had purchased the land in February, 2013 for $511,500, and they were aware at that time that AltaLink had received approval from the Alberta Utilities Commission to construct and operate the transmission line across the property.

Prior to the purchase of the property, the new owners had rented the property for approximately 27 years, and it appears from the decision that they were able to purchase the property at below market value. The Board found that the market value at the time of the expropriation in 2014 (the date of valuation for the purpose of calculating compensation) was somewhere between $902,000 and $930,000.

The Court disagreed with the owners that the right-of-way would prevent the development of multiple residential lots, but accepted that the right-of-way would result in a loss in the value of the lots that could be created.  On that basis, the Court would have calculated the compensation to be paid to the owners based on a market value loss of 15 per cent (half of the 30 per cent proposed by the owners), or approximately $131,000.

The Court then ended by making a finding that the $125,780 that would have been awarded by the minority dissenting member of the Board (in the original hearing) was therefore reasonable and set compensation at that amount.

AltaLink argued, and the majority of the Board had agreed, that an award of injurious affection would result in a windfall for the owners because they had paid substantially less than market value for the property.

But the Board had incorrectly "focused on the financial loss to the landowners and not the loss in value of the remaining land ... they were suspicious that the negative impact of the transmission line had already been factored into the sale price."

The Court ruled that "the fact that the Appellants purchased the land after the Respondent obtained a permit and license to build the line is of no consequence.  The payment for injurious affection is based on the impact on the value of the remaining land, not the impact on the financial position of the owners.  This does not result in a windfall or unjust enrichment to the Appellants because, until the line is removed, it will have a negative impact on the Land's value, which is an economic loss."

John Goudy is a litigator whose practice is focused in the areas of commercial and environmental litigation, expropriation law, energy regulation, and regulatory offences. He is particularly interested in agricultural issues and the regulation of agricultural land use. He lives and works on his family’s cash crop farm north of London, Ontario with his wife and children. 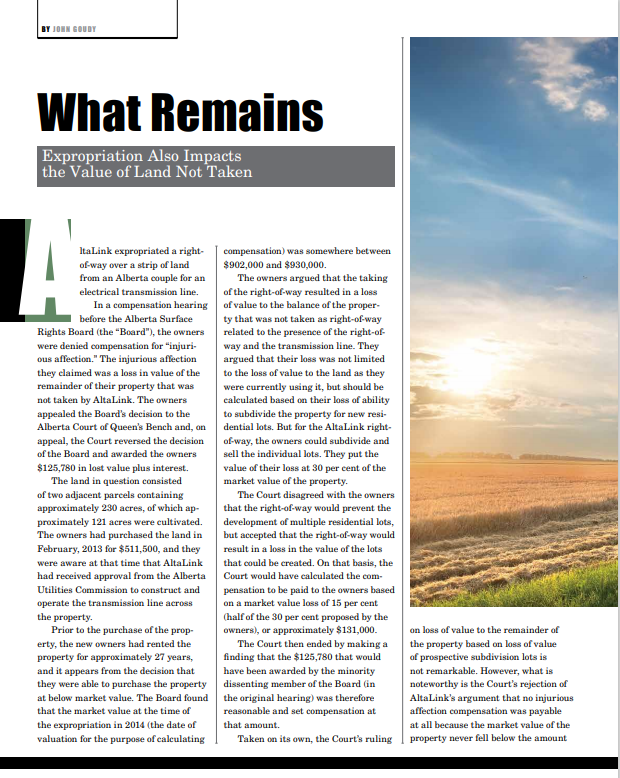 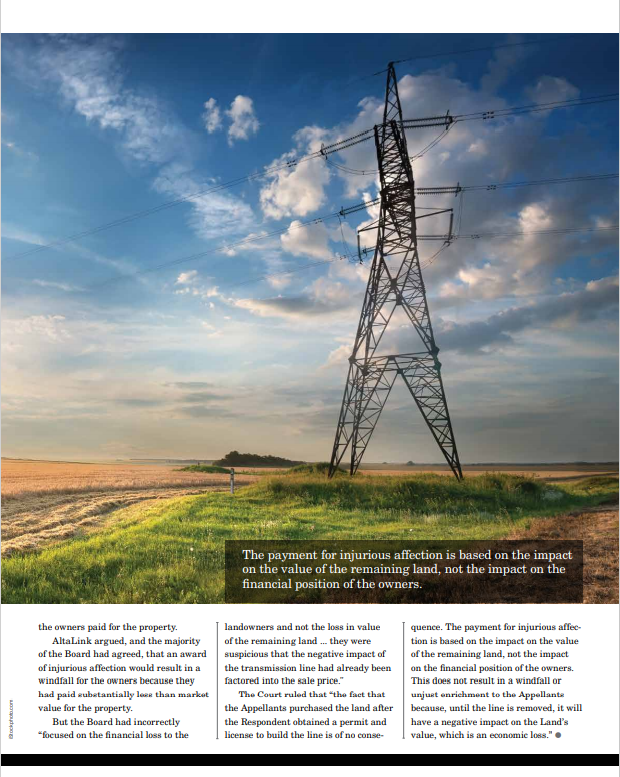