From “Captured” to Concierge

For decades pipelines have been out of sight and out of mind, making it difficult for landowners to get their legitimate issues taken seriously.

It took landowners working together, ultimately through CAEPLA, Canada’s leading national grassroots property rights organization, to put their concerns on the radar of government and industry.

The goal was never to stop pipeline development, it was to get the property rights of landowners acknowledged and respected.

The greatest infringement on a landowner’s property rights is the ability of the government regulator to grant energy corporations right of entry.

This power of the state to expropriate made win-win business agreements impossible and made every proposal from a company “an offer you can’t refuse” — literally.

Fast forward to today, pipelines are no longer out of sight and out of mind.

Yet landowners are faced with even greater infringements and potential threats to their property.

But this time, pipeline companies are not the enemy — in fact, they are natural allies against a growing threat to your property.

We have been alerting Pipeline Observer readers to the threat for a few years now.

“If the new generation of anti-pipeline activists...pick up their war on energy where they left off prior to COVID-19, pipeline landowners will be caught in the crossfire.”

For most of its history, the National Energy Board (NEB) had been “captured” by industry. Meaning the regulated energy companies had succeeded in becoming the regulator. The fox really was in charge of the henhouse.

But toward the end of the NEB’s existence, it was largely captured by another “industry” altogether — the green movement.

Shortly after, in 2018, it was suddenly decided the NEB needed to be replaced with the Canadian Energy Regulator (CER).

The CER is the NEB on steroids.

This “new and improved” energy regulator is not improved in any way that benefits landowners.

The CER — remember this is supposed to be an energy regulator — was in fact reborn to bolster not only the green movement, but to add another item to the agenda: reconciliation.

Reconciliation is the Trudeau Liberals’ explicitly political program to repair all damage done to and address all grievances of Indigenous people arising from nearly 500 years of European presence in what is now Canada.

To that end, the reconciliation-focused CER is now playing the role of concierge for First Nations activists and their travel companions in the green movement when it comes to accessing Canada’s federally controlled energy corridors.

That means accessing the property of pipeline landowners in those energy corridors.

We have discussed how this will happen in previous issues. One special feature, from the Summer 2020 issue, “A Quiet Revolution,” details the government’s plan to open your property up to First Nations occupation.

“It only takes one extremist, one eco-terrorist...to walk the red carpet rolled out by the CER onto your property.”

The bottom line is, “Aboriginal monitors” deputized by the CER can tie down your farm, ranch or woodlot in the name of heritage and archaeology if any bones, carved stones or other artefacts are found. Under the circumstances, a random arrowhead found — or placed — on your property can become the figurative tip of the spear in the latest offensive in the war on pipelines and property rights.

How to blow up a pipeline

This puts pipeline landowners in a perilous position.

Not only has the regulatory regime changed to empower First Nations and green activists to more effectively paralyze the pipeline industry, but the character of the movement is changing, too.

As Dave Core explains later in this issue with his review of the book How to Blow Up a Pipeline (page 10) the gloves are off. Passive resistance is a thing of the past; a new militancy is mobilizing the movement to the point of terrorism.

Let me be clear: I am not saying all, or even most, First Nations and green activists are potential terrorists. While we may disagree with many of their perspectives and goals, we in the pipeline landowner movement are also, as stewards of the land, committed conservationists who care about the natural environment.

We also support the aspirations of Indigenous Canadians to discover and recover the artefacts of their culture and history. And we encourage voluntary and constructive cooperation in what can often be the fascinating rediscovery of Indigenous heritage on this continent. But, it only takes one extremist, one eco-terrorist to infiltrate First Nations and green activist groups to walk the red carpet rolled out by the CER onto your property.

You may be thinking, ‘Come on, Annette — it’s just one book by some fringe radical in Europe or some other country. Let’s not get carried away.’

I wish that were so.

Far from being a fringe publication, the book has been welcomed across the media and was favorably reviewed by The New Yorker early last year.

And no sooner had Dave finished reading the book than Canada’s own darling of the media and political class, David Suzuki, declared, “There are going to be pipelines blown up.”

Suzuki made his threatening remarks at an Extinction Rebellion protest. I won’t go into what that apocalyptic group is all about, but if you want to enter into a whole new world of crazy, feel free to Google them.

My point now is that the CER has opened your property to activists advancing the Trudeau government’s reconciliation and climate agendas. You may never really know who has tagged along or what they have been reading and now believe.

So, as CAEPLA has always stressed, vigilance will be more important than ever.

Starting this year, security is our top priority, and security is a product of properly defended property rights.

Make no mistake, if the new generation of anti-pipeline activists whether of the First Nations or climate change stripe, pick up their war on energy where they left off prior to COVID-19, pipeline landowners will be caught in the crossfire.

Pipelines are unlikely to be out of sight, out of mind again any time soon. 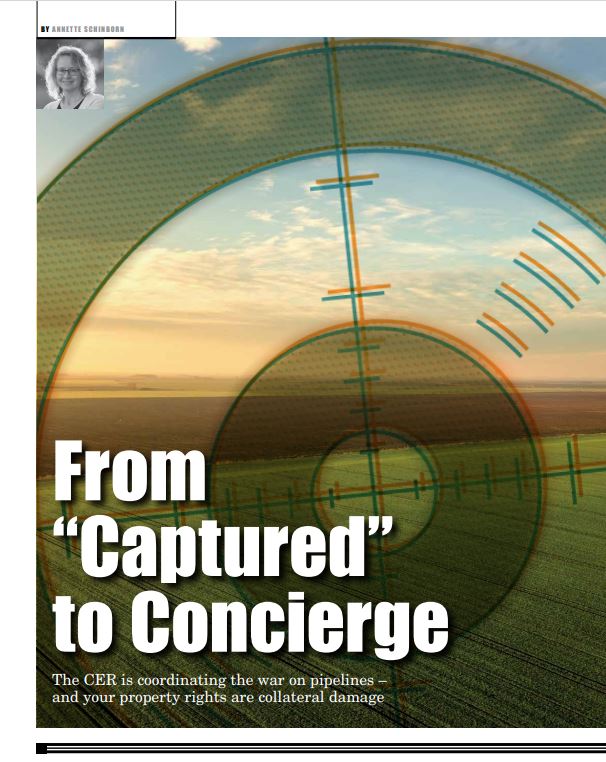 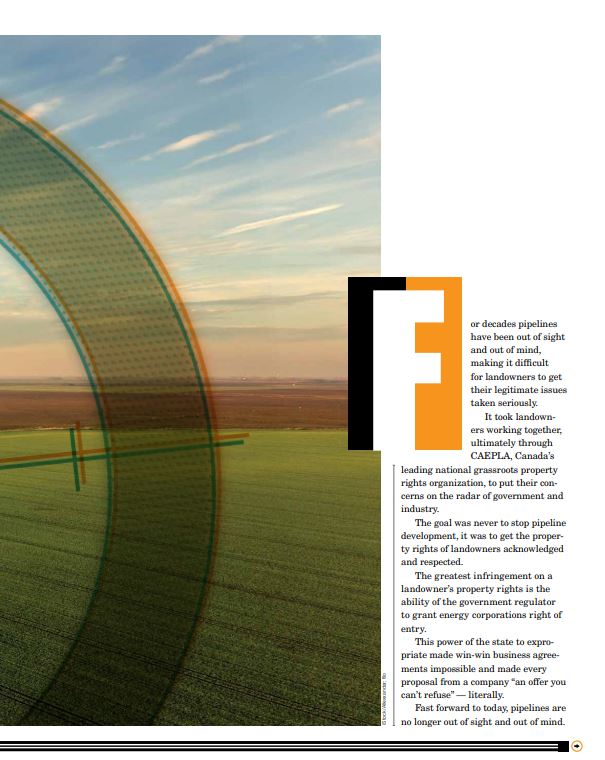 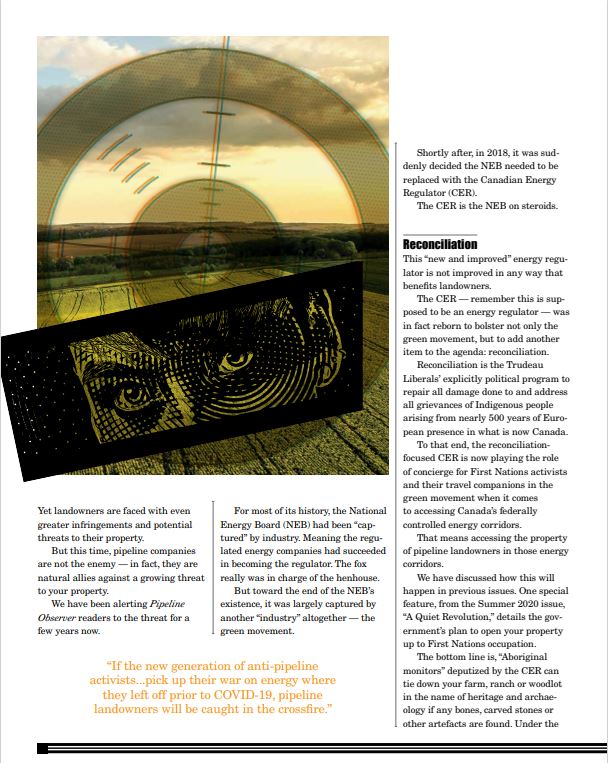 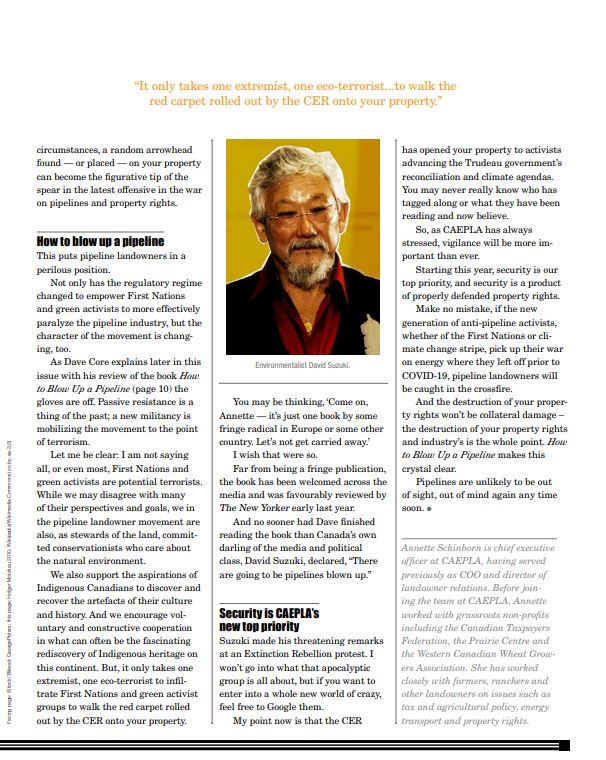