Bombshell Book: How to Blow Up a Pipeline

Some months ago, I saw a tweet from someone I follow on Twitter. He is a university professor influencing many young people, has a pipeline on his property, writes a landowner blog and is a director for the Pipeline Safety Trust.

Pretty credible guy — or so I thought.

He wrote he was reading a book titled, How to Blow Up a Pipeline.

First, I couldn’t believe someone would actually write such a “how-to” book.

Second, I couldn’t believe the professor didn’t provide any context when he flippantly made the comment, which could lead someone to think blowing up a pipeline is something rational people should do, much less talk about.

The sad irony is the Safety Trust was created as a result of a pipeline explosion in Bellingham, Wash., which tragically killed two 10-year-old children and a young fly fisherman.

Frankly, I found the professor’s tweet and his response when I questioned him about it, upsetting. Especially given his leadership role with an organization originally created and financed as the result of a court judgement against a pipeline company.

Perhaps it is because I just didn’t want to believe and can’t comprehend why anyone would write a book promoting violence and the destruction of private property that I avoided reading, How to Blow Up a Pipeline: Learning to Fight in a World on Fire.

More recently, however, I was forwarded an interview The New Yorker did with the author of the book (Andreas Malm) and found his promotion of violence deeply disturbing.

“COVID-19 interrupted the plans of the climate change movement, and now — as people are slowly going back to normal —they intend to make up for lost time by escalating their efforts to paralyze production to fossil fuels.”

Recognizing climate activists like Malm — whose claim to fame is as “a climate scholar, saboteur of SUVs and coal mines” and who calls for the climate movement, Extinction Rebellion (XR), to escalate its tactics to force fossil fuel extraction to stop — have an agenda, I decided I needed to read the book and put this brazen agenda of property destruction on landowners’ radar.

Malm admits COVID-19 interrupted the plans of the climate change movement, and now — as people are slowly going back to normal — they intend to make up for lost time by escalating their efforts to paralyze production of fossil fuels.

Remember the seemingly long ago, pre-COVID protests during the winter of 2019/2020 when activists blockaded railways and disrupted distribution of many goods, particularly agricultural products, costing the Canadian economy billions?

The published goal of leading climate activists is to pick up where they left off pre-COVID and escalate their war against private property.

For the moment, leave your opinions on COVID and the vaccines to the side. Do you believe the government suspension of property rights via restrictions, lockdowns, business closures, mandates and other draconian “emergency” measures were justified or effective?

Malm insists that protecting the life-support systems of the planet also calls for similar government emergency action — the uprooting of your property rights.

Think “climate lockdowns.” What do you imagine this could mean for family farm and ranch operations?

Malm continues to write: “If taboos against interfering with private property have been broken...If a pandemic can induce governments to take  emergency actions, why can’t a climate breakdown that threatens to kill off the very life-support systems of the planet do the same? After this, there can be no excuses for passivity.”

Do you hold your property rights to be sacred, something that should not be interfered with or infringed upon?

The six words in large print on the back cover of Malm’s book spell out his and the climate movement’s premise, promise and threat that is their ultimate agenda: “Property will cost us the earth.”

His thesis is that fossil fuels are the worst kind of evil and those who support their use are the enemy.

As much as we might like to, we can’t write Malm and his supporters off as mere crackpots who can be ignored — not ever.

“I think I know what Suzuki was reading last year.”

On Nov. 21, David Suzuki, a familiar face and name in Canada’s media and political class, said, “There are going to be pipelines blowing up if our leaders don’t pay attention to what’s going on.”

Coincidence, or more coordinated talking points from a movement emboldened by current governments and those governments’ COVID policies?

I think I know what Suzuki was reading last year.

At an Extinction Rebellion event in Victoria, B.C. — the same Extinction Rebellion incited by Malm — titled “A Funeral for the Future,” Suzuki suggested Canada needs to change its food supply chain as a way to cut fossil fuel emissions. He says people in northern countries should not be able to buy fresh produce 12 months a year.

This kind of talk puts a bullseye on the backs of already beleaguered agricultural producers.

Understand, Malm and the climate change movement do not view private property as something to be respected. He makes the mission behind his book clear when he says, “It is better to die on your feet than to live on your knees — better to blow up a pipeline than to burn impassively.” This is clearly a call to revolution. So, all agricultural landowners, especially pipeline landowners, better start paying attention,  which is why CAEPLA always reminds landowners to remain vigilant.

Opposing the mission statement set out in Malm’s book is CAEPLA’s raison d’etre.

So, What Does How to Blow Up a Pipeline Actually Say?

Fortunately, it’s not a technical manual.

Malm’s book is not a step-by-step explanation of “how to blow up a pipeline.” It’s more of a philosophical sermon to the Extinction Rebellion (XR) movement on how passivity (peaceful protest) has not and does not work, and for the climate change movement to “succeed” and conquer capitalism, it has to become “violent” and destroy property, damn any unintended consequence.

“So here is what this movement of millions should do for a start: announce and enforce prohibition. Damage and destroy new CO2 emitting devices. Put them out of commission, pick them apart, demolish them, burn them, blow them up. Let capitalists who keep on investing in the fire know that their properties will be trashed...Not only new but existing, young and old existing CO2 emitting devices would have to be deactivated.

“Sabotage is a sort of prefigurative, if temporary, seizure of property. It is both a logical, justifiable and effective form of resistance and a direct affront to the sanctity of capitalist ownership.”

The author’s alternate large print title on the back of the book, “Property Will Cost Us the Earth” makes it obvious he sees property and capitalism as the philosophical enemy of climate change warriors and, therefore, all property is vulnerable.

“Pipelines are very easily sabotaged. A simple explosive device can put a critical section of pipeline out of operation for weeks.”

Malm argues that pipelines and other isolated property are the easiest place to start as he lists historically successful violent campaigns that began with pipeline attacks. (Iran, South Africa, Palestinian Resistance in 1936, Nigeria, Egypt, India, Yemen). The industry itself helps him make the point with this quote he includes from a 2015 Pipeline and Gas Journal article “Pipelines are very easily sabotaged. A simple explosive device can put a critical section of pipeline out of operation for weeks.”

Malm is a megalomaniac, but he is reaching impressionable young followers with the message that destruction and violence will provide them, and him, euphoric satisfaction as they destroy energy infrastructure and other property — the same energy and infrastructure that has and is lifting people out of poverty around the world.

It is the same energy infrastructure that lies buried beneath thousands of farms and ranches across North America and under some of the most densely populated regions of the continent.

Malm’s message is madness, but it cannot be ignored and must be taken seriously.

Dave Core is the founding and former president and CEO of the Canadian Association of Energy and Pipeline Land - owner Associations. He presently serves as CAEPLA’s ombudsman and director of special projects. Core is also the principal of Dave Core and Associates, a consulting firm specializing in land matters and industrial relations. 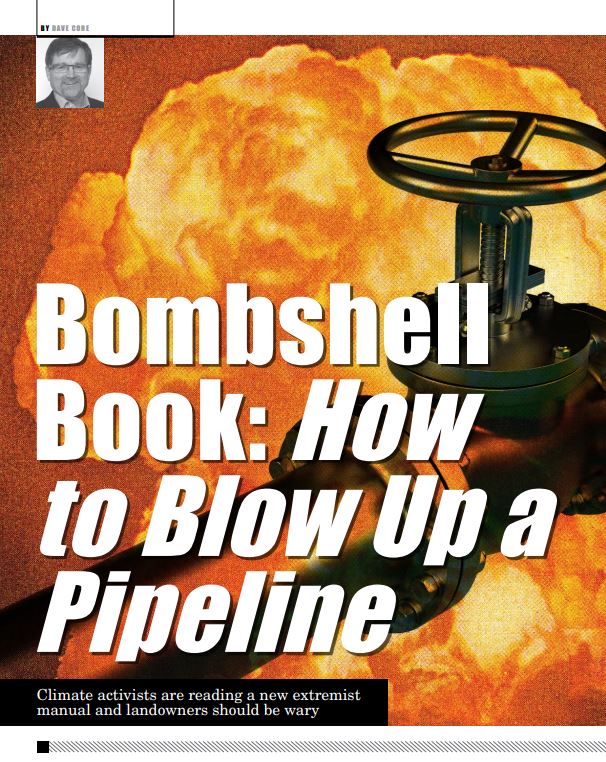 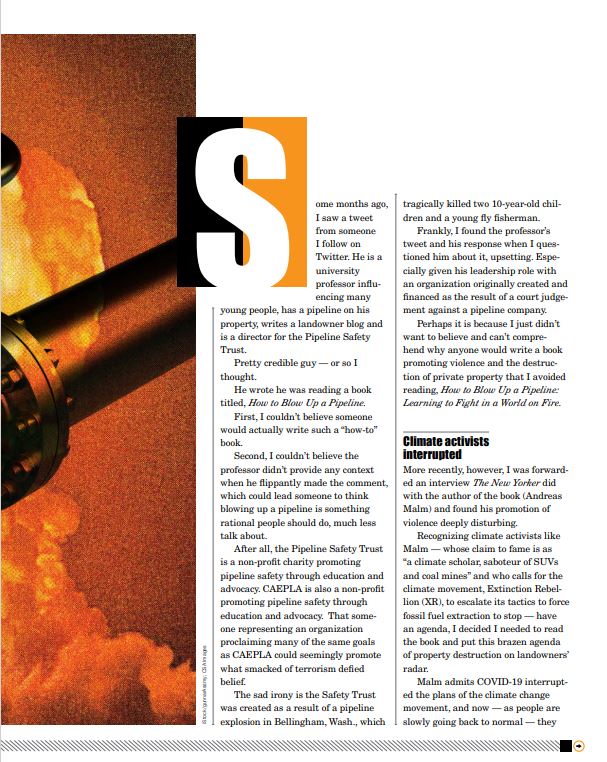 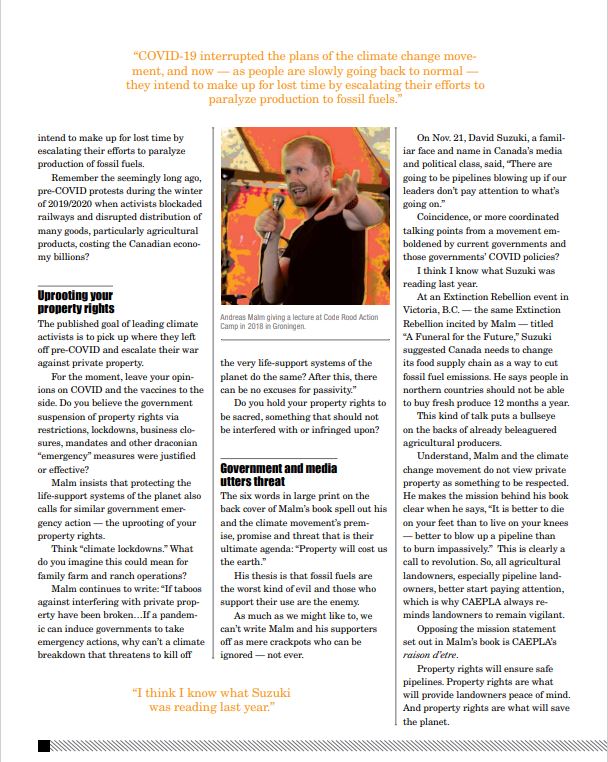 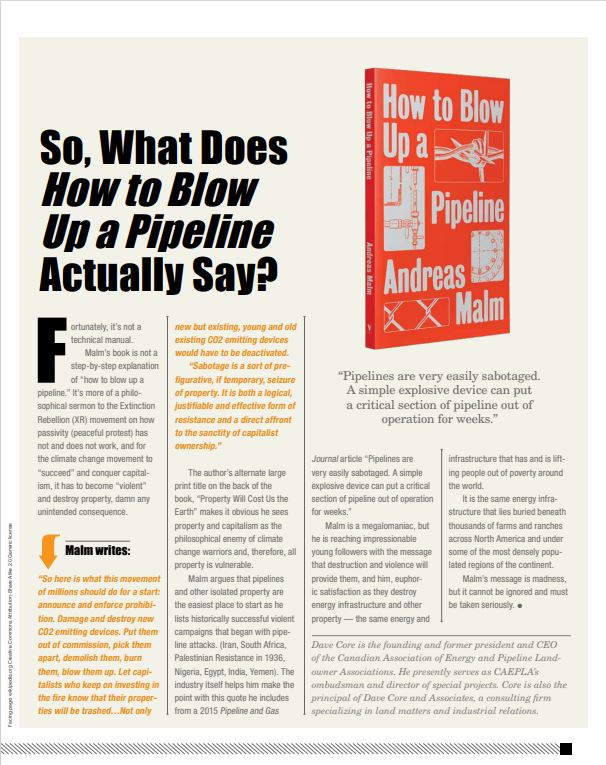