Are Property Rights a Women’s Issue?

“The pipeline landowner movement needs more women to stand up for the property rights of all Canadians.”

“The nurturing instincts of women seem to give them the edge in fighting for their rights.”

We hear a lot about “women's issues” these days, but are property rights among them?

As you may have guessed, I’m of the view that property rights are everybody’s issue.

We all own property. It isn’t just the farmer or rancher who owns acres of land, it is all of us — whether we own farmland, a house in the city, an acreage, a condo or any property at all.

And when our property is threatened or taken from us, we feel violated, no matter how insignificant it may seem to others or those who may in fact be enforcing “legal” theft.

This may seem a little silly, but recently I was in a grocery store parking lot. When I came out of the store and went to put my groceries in the back of my car, I noticed that my license plate had been stolen. It cost me time, energy and money to replace it, because someone violated my property rights.

That’s on a small scale. At the Canadian Association of Energy and Pipeline Landowner Associations (CAEPLA), we have seen it cost landowners far more in terms of stress, time, energy and money when an energy company or government knocks on their door to say they want access for a right-of-way across their property.

Adding to that stress is the threat of expropriation if the landowner does not want to accept the terms the company offers.

This affects the whole family. And women often intuitively understand the threat to their family, their children, the stress of their spouse. Sometimes it is only the woman in the family that truly understands the significance. Perhaps it is the “nesting instinct” biologists talk about.

Over the summer, Dave Core and I visited with a family who, five or six years ago, had been expropriated. A huge mess had been made of their land. I recall the first time we drove into their yard and knocked on their door. Thinking that we were yet another land agent from the company, the wife opened the door and was not happy. Not only was their property threatened (and, along with it, their farming business), but the pressure on their family was intolerable. She joked to Dave and me that she needed to buy her husband wrinkle cream, as the stress had aged him as they went through the situation.

In Manitoba, on Manitoba Hydro’s Bipole III project, the provincial Crown expropriated fee simple title of over 200 farm families and then held them hostage by saying they could get their land back if they signed the woefully inadequate easement agreement that the provincial power monopoly offered.

Many landowners, not being able to handle the stress, signed the agreement just to get title of their land back.

Other landowners have courageously fought on and held out to this very day. CAEPLA has stood with and continues to assist them as they man the ramparts for their property rights.

One lady on the project, in an effort to protect her land, drove a tractor across an approach in order to block access to her land and keep the contractors off. She was fighting for bio-security cleaning protocols to protect her land from clubroot, noxious weeds, soil compaction and rutting during wet weather —to name just a few issues. She stood up for her property in the face of bullies who made snide remarks and threats.

A pioneer in her efforts in fighting alongside her husband for the respect of their property rights was Jean Lewington. I personally met Jean in 2016 when she invited Dave Core and me to her farm.

Jean and her husband were at the forefront of the pipeline landowner property rights movement when, in the 1970s, they mortgaged their farm to take the pipeline company that had damaged their property to court. (After their successful court case, Natural Resources Canada rewrote regulations so that landowners could not take a company to task before a court of law in defense of their property. These changes left landowners with “no rights and no remedies outside the National Energy Board Act.”)

Jean and Peter hired soil specialists and other experts and personally funded research to mitigate the impacts of pipelines on farming, raising the environmental standards in pipeline construction.

Jean remained a strong supporter of CAEPLA to the very end, passing away at the end of May this year, at the age of 99. Her son, Roger, attended CAEPLA’s workshop in Ontario at the beginning of April, bringing greetings from his mother, who wanted to attend, but whose body was not strong enough.

As has been our experience at CAEPLA, the issue of property rights is not just for the male members of the family. And in ever-increasing numbers, women own and operate farming/ranching operations and ag businesses.

I met Stephanie in 2011 when she contacted CAEPLA regarding a pipeline project that was proposed to cross her property.

Despite having two pre-school children as well as an eight-month-old baby, Stephanie organized landowner meetings for CAEPLA reps to speak at. These information sessions allowed her neighbours getting the pipe to understand the implications and, later, to work together to get an easement agreement that protected their property. She participated in the National Energy Board (NEB) hearing on the project, even cross-examining the company lawyers to hold them to account.

The company wound up going around Stephanie’s land. But she continued to work for the group and with CAEPLA to negotiate a good agreement for all the landowners who chose to cooperate in defense of their property rights.

The brush with that particular project is a big part of why Stephanie understands the importance of establishing strong agreements. It is also why she insists on protocols to set higher standards and protect landowners into the future when the next project is proposed. She is pro-development, pro-business, pro-property rights.

The nurturing instincts of women seem to give them the edge in fighting for the rights that will protect their family for generations to come.

The time and energy invested by Jean and Stephanie will benefit all Canadian families, not just their own. They are everyday people whose determination not to be taken advantage of, and to instead protect their family and their property, is a defining characteristic enabling them to stand up for what’s right in the face of seemingly insurmountable odds.

The pipeline landowner movement needs more women to stand up for the property rights of all Canadians. Yes, we are all often very busy with our jobs and our families, but when we lose our rights it takes double or triple the time, energy and cost to get them back.

Back in the ’70s, Jean and Peter were on their own. Through their courageous efforts and those of many landowners following in their footsteps, landowners like Stephanie now have CAEPLA in your corner and on your quarter section.

Remembering Jean Lewington, a Pioneer in the Fight for Property Rights

Jean Lewington, a woman who was very active fighting for property rights, passed away at the end of May 2019. She was 99.

Jean and her husband, Peter, had a tremendous influence on the pipeline landowner movement. This pioneering couple have been mentioned in the pages of the Pipeline Observer before—in “The Book that Inspired the Creation of CAEPLA” (Summer 2016) and “A Solution to Pipeline Industry Paralysis” (Fall 2018).

During the Second World War, Jean enlisted in the Women’s Royal Navy Service, where she served as a radar operator and ambulance driver. With that kind of courage, we can easily understand why she, and Peter, would never back down from a fight with an energy company or the government.

In July 2016, Dave Core and I were invited to visit Jean at her home at Larigmoor Farm (she and Peter purchased the Ontario property in 1952, soon after arriving in Canada). During our visit, it was immediately apparent that, even at the age of 96, Jean was still a formidable force.

Challenged by arthritis in her final years, Jean got around her farm in a golf cart. She loaded Dave, me and her beloved dog, Willie, into her cart and sped off across the fields to show us the right-of-way that had compromised their land back in the 70s. She and her husband had fought hard to protect their land along that easement. Not only did they want restitution for what happened to their property, they wanted changes to construction practices that would prevent such damage happening again.

“Look,” she pointed out to us, “you can still see the difference in the quality of crops grown on the right-of-way compared to the rest of the field.”

With great determination and hard work Jean and Peter, along with Stu and Joycelyn O’Neil, had mortgaged their farms to sue the pipeline company that had harmed their land.

An avid proofreader, editor and advisor, Jean was a force to be reckoned with as an ally to Peter while they engaged in that precedent-setting court battle. She was also instrumental in the writing of the Lewingtons’ book, “No Right-of-Way,” which detailed their epic effort on behalf of pipeline landowners.

Jean was an inspiration. Her passionate fight for property rights will be her legacy. 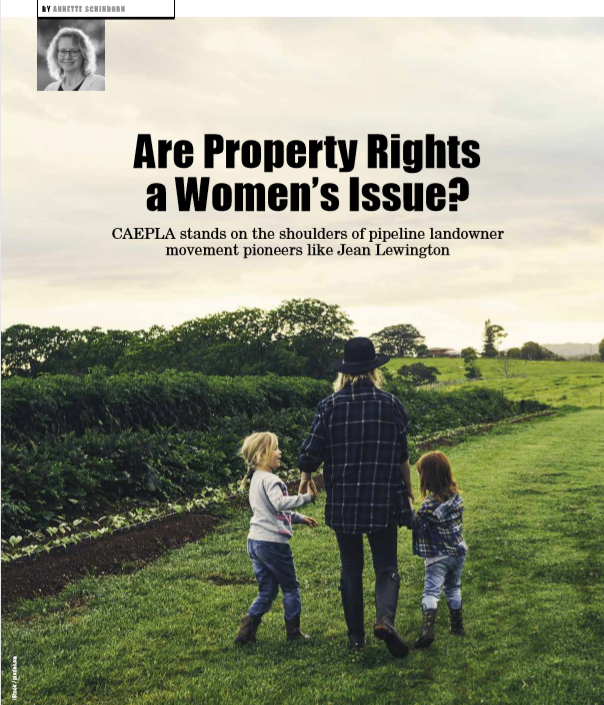 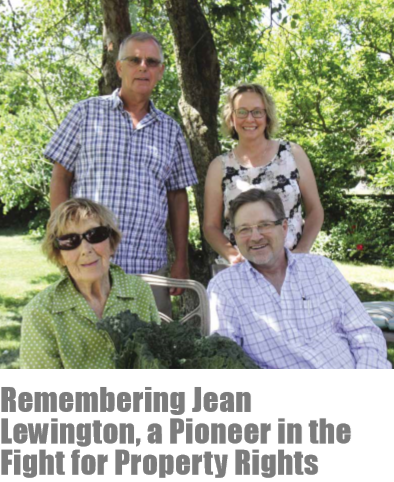