The Book that Inspired the Creation of CAEPLA

Jean Lewington and her husband Peter began the modern Canadian landowner movement and dedicated their lives to improving and protecting both agriculture and the environment when pipelines are built. I spoke to her recently and was reminded that she remains CAEPLA’s eldest environmental icon.

Their concerns began when Peter hit a pipeline survey stake in 1949. From that point on they struggled, according to Peter, “To preserve Canadian farmland and the environment from the ravages casually and arrogantly inflicted by powerful pipeline companies, outmoded laws, condescending government agencies and an indifferent judiciary.”

When the National Energy Board (NEB) authorized a third pipeline on their farm in 1975 and gave the company Right of Entry (expropriation) allowing devastating construction practices, there was still no oil-spill policy in place.

Peter wrote, “Probably the most damning indictment of all was that my wife and I, with our puny resources, had funded more research to mitigate the impacts of pipelines on farming than the provincial and federal governments and the entire oil industry combined, in the history of pipelining.”

It was upon this realization that Peter and Jean Lewington and their neighbors Stu and Jocelyn O’Neil mortgaged their farms and families’ futures in the best interests of all Canadians—and of the pipeline industry—and went to court.

They understood the economic benefits of fossil fuel and the need to transport it by pipeline, but they suffered the consequences of their damaged farmland from the pipelines forced through their properties.

What they wanted was respect—and for the pipeline companies, the NEB and government to understand the implications to their property, soils and environment.

Peter later wrote in No Right-Of-Way: How Democracy Came to the Oil Patch, his groundbreaking 1991 memoir about the founding of the modern landowner movement in Canada, “Many people have a home and a separate place of business. For farmers, everything is wrapped up in the land they farm. When pipeline construction occurs, especially in the absence of good pipeline procedures, the peaceful enjoyment of their land is shattered, and the ability to manage crops and livestock is drastically impaired.”

Of the NEB, Peter reported an observer as saying, “There are too many people, with too little knowledge and too much power.”

The Lewingtons and O’Neills can be credited with some of the biggest environmental changes to the pipeline industry. Their efforts and those of the many people they inspired have helped make pipelines the safest way to transport carbon energy. Pipeline construction practices on agricultural land changed drastically as a result of their dedication and continue to improve today with CAEPLA’s input and lobbying.

No Right-Of-Way is a thorough and very readable chronicle about the failures of the NEB, and how landowners organized to get results in spite of that bureaucracy’s bungling.

Sadly, Peter died shortly after No Right-Of-Way was published. Yet his book remains a testament to what can be accomplished when landowners work together to engage industry in the interests of safety and the environment.

Peter and his book also continue to inspire and inform CAEPLA’s work. I spoke with Jean to see if she had any more copies of Peter’s book that I might be able to distribute. She was extremely glad I called. She still looks out the window of the farmhouse and sees the pipeline right-of-way with its puddles of water, which reminds her of their struggle. She wanted to thank the many people who have continued to educate pipeline companies and the NEB and she is grateful for the continued work of CAEPLA in its work to protect property rights in pursuit of safer pipelines.

After my conversation with Jean, I am confident Peter would be pleased with where the movement he helped found has gone. We still have to contend with a bungling and out-of-touch NEB, but I can report that our efforts to engage industry are resulting in more of the respect the Lewingtons and O’Neills sought all those decades ago—not only for landowners, but for our environmental stewardship and commitment to safety.

The Lewingtons were early environmentalists, but they were never against pipelines.

Excerpts from Peter Lewington’s No Right-Of-Way: How Democracy Came to the Oil Patch

“The Business Quarterly, a sober bastion of Canadian business, observed in a 1973 feature on expropriation, ‘There are no Constitutional safeguards here. In one of his classic outbursts, The Honourable Jack Riddell once said that in this country the government can do anything—even steal with impunity.’”

Referring to problems historically encountered by landowners when dealing with the energy transport sector, Lewington writes, “The root cause in Canada was the use of the archaic Railway Act and its applications to pipelines and agriculture. When the Railway Act was drafted, it was a different world. The creation of such Canadian provinces as Alberta and Saskatchewan were still a quarter of a century in the future. The use of the Railway Act in the nineteenth century was good for Canada’s development. Its abuse in the 20th Century has been an unmitigated disaster for agriculture and the environment.”

“Right or wrong, a pipeline company can go into a property and turn it into a wasteland.”

“Your decision may well have far-reaching effects. Your judgment, based on the evidence, will either be a landmark decision to protect our environment, or it will be regarded as an expression of approval for the buccaneering practices of pipeline construction. ”

— Landowner lawyer to a federal court judge, in response to the above

“The NEB today is fundamentally little different than it was in the 1960s and 70s… Small wonder that Maclean’s magazine had earlier noted, ‘The Board [NEB] is a Keystone Cop, even if its antics contain more potential for tragedy than comedy.’” 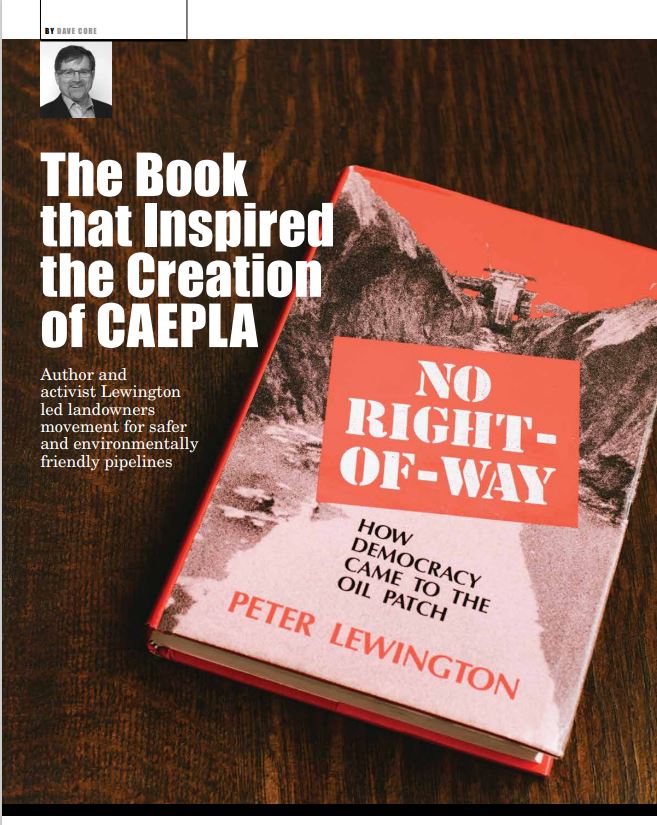 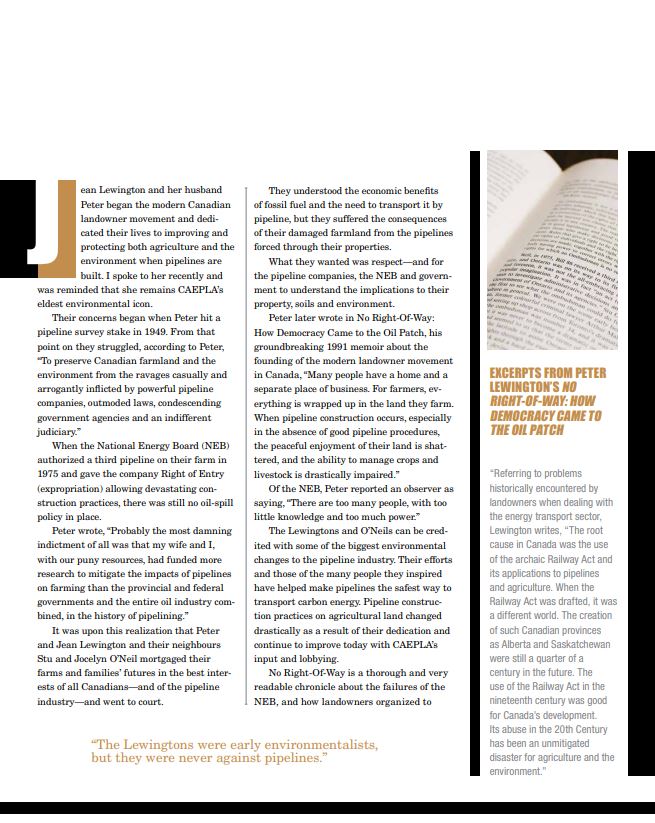 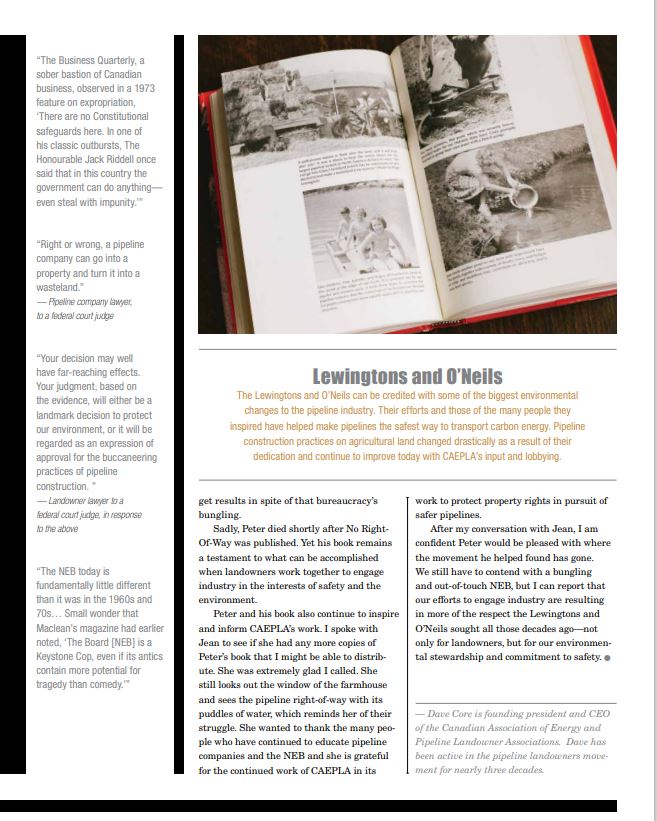