A Pioneer of the Pipeline Landowners Movement Passes

Stu O’Neil was a teacher and a conservationist who would not back down.

Stu O’Neil was not only a pioneer in the fight for property rights but forged the first landowner association that inspired the formation of Canada’s only national property rights organization.

“The Book that Inspired CAEPLA” was a headline story in our Summer 2016 Pipeline Observer. Peter Lewington’s 1991 memoir, No Right-Of-Way: How Democracy Came to the Oil Patch, told the story of how Peter, along with his wife Jean Lewington and their neighbours, started the pipeline landowner movement.

Peter and Jean Lewington and their neighbours Stu and Jocelyn O’Neil mortgaged their farms and families’ futures in the best interests of all Canadians — and ultimately, of the pipeline industry — and went to court. They understood the economic benefits of fossil fuel and the need to transport it by pipeline, but they suffered the consequences in the damage done to their farmland from the pipelines forced through their properties.

The Lewingtons and O’Neils can be credited with some of the biggest environmental progress in the pipeline industry. Their efforts and those of the many people they inspired have helped make pipelines the safest way to transport oil and gas. Pipeline construction practices on agricultural land changed drastically as a result of their dedication and continue to improve today with CAEPLA’s input and lobbying.

Born and raised on the soil of London Township, Ont., the farm was in Stu’s blood from the beginning.

He was educated at the University of Guelph, one of the most respected agricultural universities in Canada, and began his career as a science teacher at a number of post-secondary schools in London. This prepared him well for his lifelong passion for land conservation, and his dedication to the movement.

In 1993, when an application was made to convert an oil pipeline to gas and create a new easement agreement and power of attorney for the company behind it, Stu decided to take action.

Together with his wife Jocelyn and with much help from Marg and Dave Vance, Stu went on to organize nearly two hundred landowners along the very corridor immortalized in Peter’s book.

He became the founding President of the Ontario Pipeline Landowners Association (OPLA), the first pipeline landowner association representing a large number of landowners on a major energy corridor in Canada.

The sheer number of landowners compelled the regulator (the National Energy Board at that time) to listen, and the pooling of their resources allowed the landowners to hire legal counsel without having to mortgage their farms and risk everything.

Stu and Jocelyn put everything on the line the last time they took on a pipeline company, this time people all along the pipe backed them up.

Stu served as President of OPLA until 1999 and represented the organization in a number of precedent setting negotiations. He and Marg Vance were requested to attend and participated in the NEB’s pipeline Stress Corrosion Cracking hearings.

As Ian Goudy, another pipeline landowner pioneer mentioned in Peter Lewington’s book, says, “People would tell Stu that he would never get anywhere with their lawsuit but he never backed down and if you told Stu that he couldn’t do something, he would then simply dig in his heels. Stu was a positive influence, a teacher through and through, he mentored everyone who followed in his footsteps, not by doing things for them but by giving advice then expecting you to follow through.”

It was Stu’s experience and advice that provided the impetus for Ian to form two successful gas and water pipeline associations. “It’s good the world has people like Stu, look what was accomplished by not backing down,” Ian adds.

After retiring from OPLA in 1999, Stu returned to work on his spruce and maple farm, focused on conservation and pursued his love of golf. He attended the founding meeting of CAEPLA and served as a conscientious advisor until his death. He will be sorely missed. 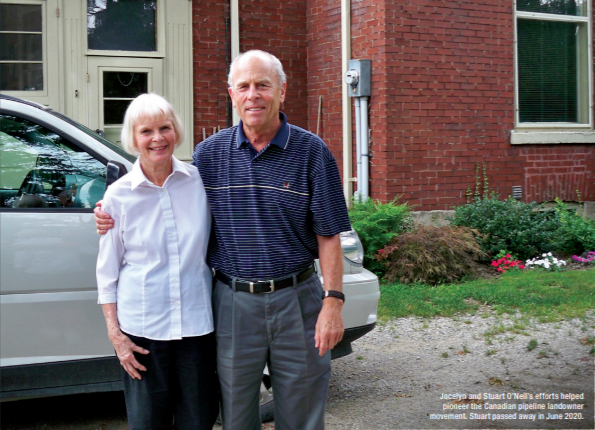