But with the help of CAEPLA, a rancher was able to protect his land and continue his horse rescue breeding program

Arnold McKee still lives where he always has.

“As a teenager, I grew up riding all these hills, training horses,” he says from his ranch about 18 miles south of Oyen, AB. “Every hill and coulee and rock and buffalo wallow, I know it.”

And it’s the only place he wants
to be.

But in recent years, the land he loves and feels driven to protect has seen no end of needless horror play out, because of the disruptive Keystone pipeline on his property.

For McKee, the nightmare mostly comes down to the welfare of his horses.

In 1994, after many years of struggling to make it happen, McKee managed to rescue some horses from the Suffield military base, which had been locked up and abandoned for years after the government took over.

Most horses were rounded up and taken to slaughter, but McKee adopted two and later bought more, protecting the incredible, rare and irreplaceable breed.

“They are extremely special,” the 76-year-old rancher says. “Their quality is so unbelievable. These horses are so intelligent and so strong. They are a mixture of all breeds.”

And, he says, the “only surviving genetics” of those horses are in his yard today.

But the precious animals McKee has worked so hard to protect have been threatened by ongoing activities associated with the pipeline operation splitting his property right down the middle.

All the disruption of the operation has led to stress and left dry mares incapable of breeding.

“The breeding percentages went down because of everything,” he says.

It didn’t end there.

McKee has lost more than a half dozen horses to dust pneumonia, casualties of the pipeline operation, left unable to breathe as their lungs filled with dirt.

Other horses that dodged the deadly respiratory condition ate dust that settled on the grass, wearing their teeth down, which left them to starve to death.

A horse hit the fence put up by pipeline crews and broke its neck, and colts caught in the fence lost their lives.

“They were screaming and dying, and I had to go get my gun and shoot them,” McKee says. “These things happen when there is construction and stupidity.”

When McKee took his concerns to the pipeline officials, it got him nowhere.

“Nobody was listening,” he says.

“They destroyed the place,” McKee says of his land, which has the pipeline running through his foaling pasture and huge piles of dirt left about the place.

“I have great pride in this place, but I feel like I’ve been invaded.”

Last summer, the construction crew asked McKee to move his stallions from out in the field and into pens.

That was the last straw for McKee.

With the help of Dave Core, CAEPLA’S director of special projects, McKee managed to get the pipeline company to pay to build those extra pens along with compensation for all the issues, he says, but it was a struggle.

“Arnold called me asking if I’d deal with TC Energy’s lands people, as he was too stressed. He felt they would not listen to him when he explained his concerns about what had happened to his horses during the construction of the Keystone in 2010, and didn’t want his horses endangered again,” Core says.

“The situation kept escalating and I visited his ranch to see and understand his horse-breeding operation. Arnold wasn’t against the pipeline being built — he just wanted it built in the winter when it wouldn’t disrupt and endanger his horses. TC said winter construction wasn’t possible for them on the Keystone XL. After two intense meetings between TC lands people and Arnold, CAEPLA was able to help find a solution that worked for TC’s construction schedule and the safety of Arnold’s horses.”

“What Dave and I accomplished was huge and I’m proud of working with him to get what we did. But as he says, it’s not over, we are still in the battle,” McKee says of the bittersweet success that only goes so far. “How do you replace genetics that can’t be replaced?”  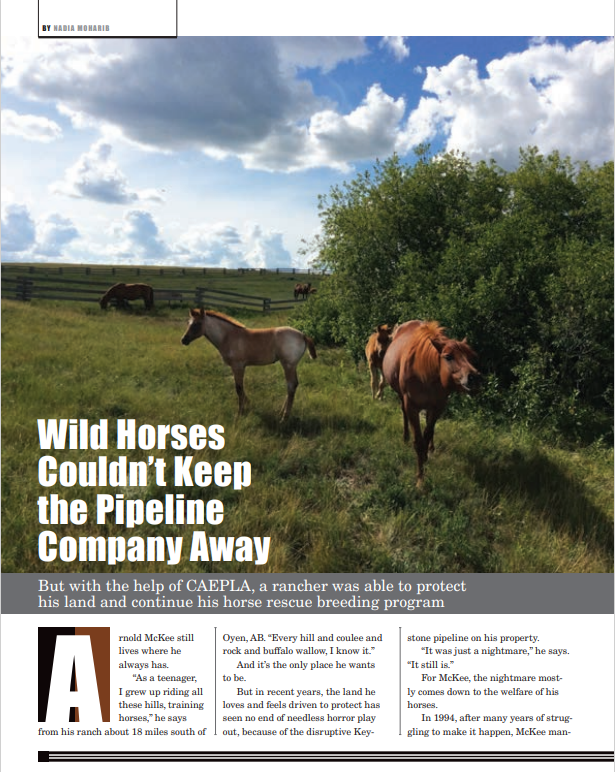 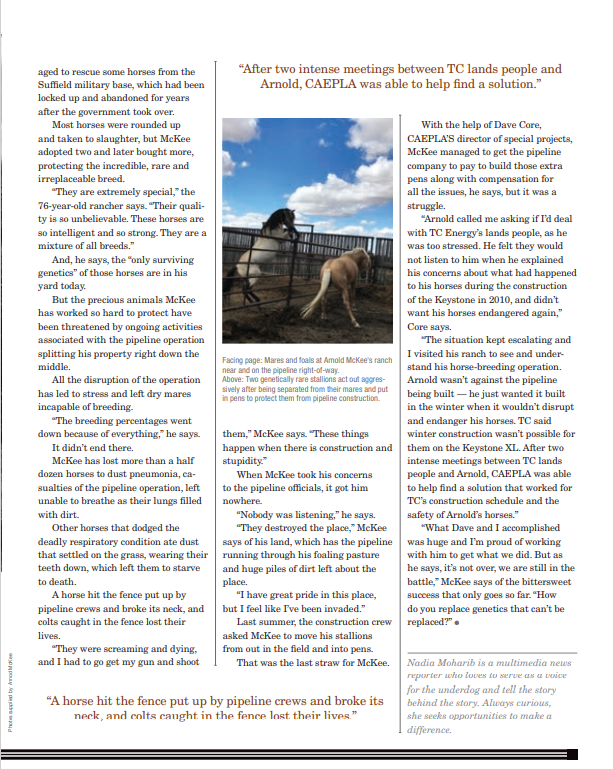