Why Are Pipelines in Peril?

Because property rights were already precarious

“Whether a proposed pipeline expansion is a good or a bad thing is beyond the proper purview of an economist.”

The Northern Gateway, Energy East and Pacific Northwest LNG Pipeline proposals have been scrapped. The proposed Kinder Morgan Trans Mountain expansion is in limbo, as are other less prominent proposals for new and expanded pipelines.

The level of tension is palpable: Shareholders are anxious, investors are leaving, workers are worried and environmentalists are strident. Still others are angry, despondent and befuddled.

Interpersonal conflicts over pipelines reveal that pipelines are much more than they seem. There’s a lot at stake, much more for some individuals than others. And it’s much more than money: it’s family business, friendships, security, ecology, property, freedom, the future—and things so personal and deeply subjective that they defy words.

Economic science should be particularly helpful to make sense of this problematic situation. After all, economics is about people and it is value-free. Propositions of economics, such as the law of demand, neither state nor imply any judgments about what is good or bad, right or wrong.

As the price of something increases, all other things being the same, the demand for it falls. Whether the price increase is a good or bad thing is beyond the proper purview of an economist. So too is whether a proposed pipeline expansion is a good or a bad thing. It is up to you to contemplate and make up your own mind.

Crux of the controversy

Digging a bit deeper, the crux of the controversy is really a debate about the nature of property rights.

When we think of property rights, we often think of ownership. Private ownership of the means of production is the fundamental institution of the market economy. And because it is central for the functioning of market processes, one would expect a consistent message from economic scientists.

But there hasn’t been. Why have economists been so ineffectual in helping others better understand the problematic situation?

Economics is a science of the means individuals must choose if they are to reach the humanly attainable ends they have chosen in accordance with their value judgments.

One reason that economists have not been especially helpful is that in exercising their own value judgments, and without overt acknowledgement, they have invoked distinct and conflicting theories of property rights in their work. In his 2011 book The Myth of the Rational Market, Justin Fox identified and delineated five competing theories: Classical Liberalism, three theories linked to the progressive movement: Utilitarianism, Pragmatism and Legal Positivism and finally, Modern Libertarian theory.

“The reason central planning always fails is because it requires a utilization of knowledge that is not given to any single person or small group in its totality.”

[1] If the value judgment of the economist is some form of utilitarianism—i.e, allocation of property to highest valued use, economization of transaction costs, the greatest good for the greatest number—this is a basis to either support or oppose pipeline expansion.

[2] If the value judgment of the economist is that of a political pragmatist—i.e., property rights are the product of resolution of past conflicts or perceived imbalances and reflect “good” values for which we have “good” reasons—this is a basis that also can be used to both support or oppose pipeline expansion.

In other words, “rules are rules,” and the harm inflicted on some because of pipeline expansions are worth it for the upside it offers to beneficiaries.

Bottom line: Economic science can be and is used to defend both [1] and [2]. For the most part, economists engaged in research have adopted a utilitarian theory of property rights.

The source of the difference in the two positions lies with the a priori valuation or mind set of the individual. Valuation and selection of ends are beyond the scope of economics and every other science. It is interesting to note that both [1] and [2] are fatally flawed positions, because each requires quantifiable inter-personal comparisons of well being, something that is neither amenable to quantification nor objectively knowable.

Devastating problems arise when individuals are compelled to rely on economists, or anyone else, in place of their own decision-making faculties. Author C.S. Lewis famously remarked that of all tyrannies, a tyranny sincerely exercised for the good of its victims may be the most oppressive. He was correct. The reason central planning always fails is because it requires a utilization of knowledge that is not given to any single person or small group in its totality. As Nobel Prize-winning economist Frederich Hayek explained, “The economic problem of society is not merely a problem of how to allocate ‘given’ resources—if ‘given’ is taken to mean given to a single mind which deliberately solves the problem set by these ‘data.’ Rather, it is a problem of how to secure the best use of resources known to any of the members of society, for ends whose relative importance only these individuals know.”

Only an economist could offer such a complex elaboration of the reality that humans are not omniscient. But it is precisely because we can forget or choose to minimize or to ignore the people involved, that to our detriment, some are drawn to government interventionism and forms of socialism that circumscribe, reject or eliminate the institution of private property. This is the root cause of pipeline conflicts. And economists could draw better attention to it if they paid closer attention and communicated their premises about property rights.

The ability to build trans-provincial infrastructure in Canada is predicated inexorably on economics. Recognizing differences in how individuals perceive and tolerate the institution of private property provides vital insight with regard to dead and floundering projects. It also enables unique critical assessment of decisions by policymakers, the effects on the livelihoods of hundreds of thousands of Canadians, and the billions of dollars of foregone earnings of entrepreneurs and property owners.

Danny Le Roy, PhD., is an economics professor at the University of Lethbridge where he is also coordinator of the Agricultural Studies program. Areas of research include commodity production, marketing and trade, government interventionism and Austrian Economics. He blogs occasionally at mises.ca. 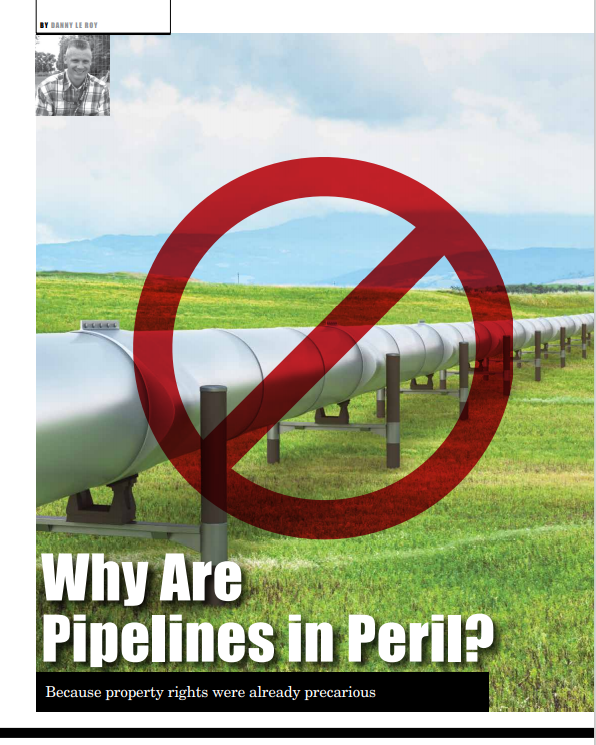 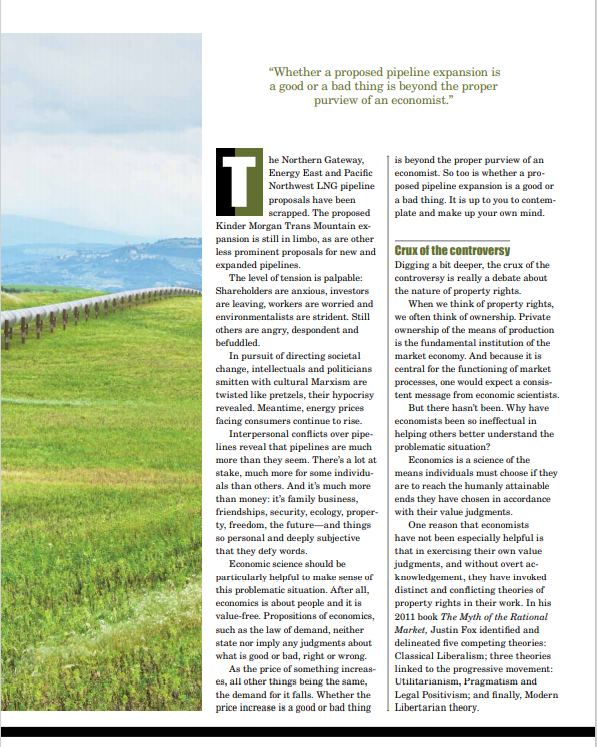 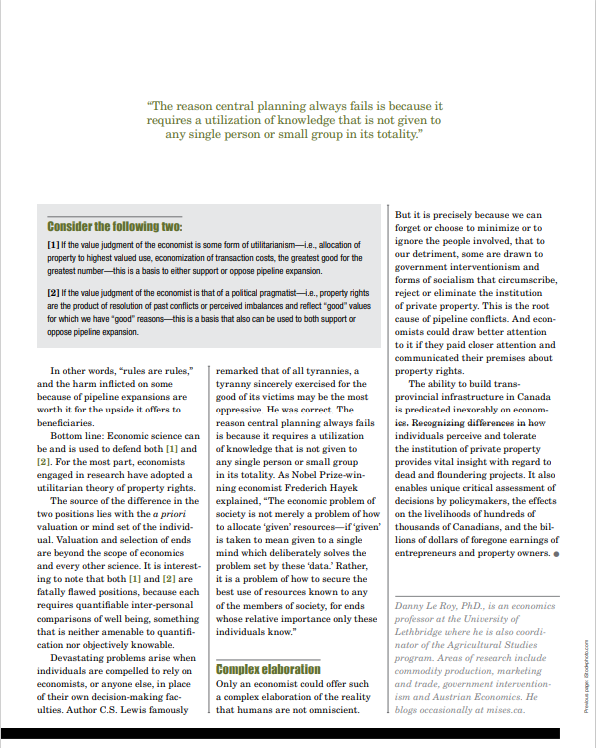