Who Can You Trust?

I have been involved in pipeline landowner issues for nearly three decades. In the last two decades, I have worked with the Canadian Association of Energy and Pipeline Landowner Associations (CAEPLA) negotiating precedent-setting solutions to landowners’ legitimate concerns on many projects, with many different companies.

But I have never seen anything quite like the “company” that currently owns the Trans Mountain pipeline and its expansion project (TMX). The company I refer to is, of course, the Government of Canada, which makes TMX no ordinary company—it is a Crown corporation.

The majority of energy transport companies CAEPLA has successfully dealt with are privately owned. Crown corporations are creatures of government and, as such, are different animals altogether.

CAEPLA has been in the trenches fighting a provincial Crown— Manitoba Hydro—for the last five years. This experience has taught us, and our member landowner committees on the front line, that Crown corporations are a landowner’s worst nightmare.

Ever heard it said, “You can’t fight city hall?”

The saying is meant to suggest the deck is stacked against the individual citizen because, after all, city hall is the government, which means it has unlimited resources and makes all the rules.

Well, Crown corporations are part of the government, too. The same government that writes the regulations and hires the regulators. This is why I am afraid for TMX landowners. Very afraid. And you should be, too, if you are a landowner on that pipeline.

Why be afraid? Because if CAEPLA’s experience on the Prairies with Manitoba Hydro and Sask Energy are anything to go by, TMX—assuming construction ever actually gets going, but that’s another column altogether—will be the worst thing that ever happened to landowners along that corridor.

Whether it’s in regard to replacement or expansion construction, soil restoration, integrity digs, abandoned and decommissioned pipe or historic contamination—and trust me, there will be lots of historic contamination on Trans Mountain—landowners are going to be in a tough spot dealing with Ottawa and the regulator.

So this is your last chance to get this project done right. Meaning, landowners need experienced professional help.

CAEPLA has acted with and resolved issues for landowners in win-win agreements on all the major projects approved and built in Canada in the last decade. First on the Enbridge Alberta Clipper/Southern Lights Project from Hardisty, Alberta, to Gretna, Manitoba. Then on the approved and completed TransCanada Keystone and the approved (but not completed) Canadian portion of the KXL in Alberta and Saskatchewan. And later on a number of TransCanada projects in the Peace area of British Columbia and other pipeline and energy corridors across the country.

Line 3 was an aging pipeline that was causing worries for Enbridge, landowners and other stakeholders. Output and pressures had been reduced for safety reasons and something needed to be done.

With unanimous support of landowners, the result was precedent-setting construction practices, robust biosecurity standards and new pipe technologies topped with a renewed safety culture. All of which made L3RP the only major federal oil pipeline project approved and underway with the current government.

As proven by the successful last weld on the Enbridge Line 3 Replacement Project in late spring, CAEPLA’s expertise and solution-based negotiating skills were invaluable in getting full landowner support for this replacement and expansion project. Again, with the unprecedented landowner agreement, advanced construction standards and engineering technology, L3RP is arguably one of the safest, soundest projects in history, anywhere on Earth. 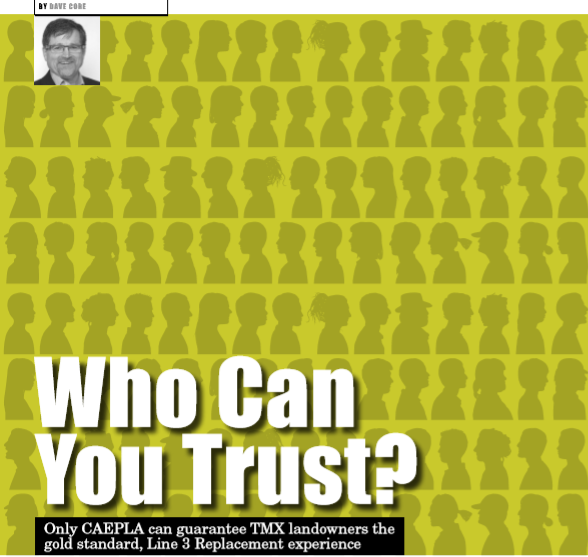