When Pollution Is a Violation of Property Rights

“In contrast, Orgaworld seems to be a winner. It has been fined, yet it continues to operate. It would seem that from Orgaworld’s perspective, fines are simply a cost of doing business — there are still profits to be made after fines have been paid to the government.”

Orgaworld is a company that operates a waste treatment facility in London, Ontario, but it also emits offensive odours that affect residents and businesses in the surrounding community. This has been an ongoing problem since 2007, when the plant opened. Despite numerous charges and fines levied by Ontario’s Ministry of Environment, Orgaworld continues to violate the law.

The government claims to protect communities and the environment. As Ministry spokesperson Kate Jordan said in reference to Orgaworld’s 2014 fine, “It not only resolves this issue, but as ‘a significant penalty,’ it acts as a deterrent to future problems.”

Except it didn’t. Problems persist. The government continually breaks its promise to protect “communities and the environment.” But this should not surprise us.

The government’s refusal to protect the property rights of residents is a direct consequence of its immoral process of law-making, which fails to address the relationship between polluters and those whose property is affected. If a more effective and just legal regime were used, you would likely not be reading this article because it is virtually certain that Orgaworld would not exist in its current location.

Who should make the laws?

As it is, regulatory laws made at legislatures and government agencies against environmental pollution are made without the involvement of those who are affected by extant cases of pollution. These laws, written primarily by special interest groups, favour only certain groups at the expense of ordinary residents who are generally excluded from the law-making process.

This helps explain why polluters can persist as polluters without being answerable to those who are most directly affected by the pollution. Moreover, those who must pay taxes for the government “services” of preventing trespass on private property, via pollution, often don’t actually receive these services in return. This has been true in the Orgaworld case.

A sea change is needed in law-making

To more directly address the property rights of those who are subjected to polluters like Orgaworld, we must go back to earlier, less authoritarian, and more effective means of making law.

Government lawmaking via legislatures is a recent development. In the past, “bottom-up law-making,” or customary law, was more commonly used to address issues of property violations through the courts. Those who were directly affected, if they could prove they had been harmed, received recompense directly from the violators.

Modern legislature and administrative lawmaking, in contrast, relies primarily on levying fines against polluters, with fines going to government and not to the victims. Moreover, the victims are not involved in these deals between regulators and polluters. Thus, we might think of laws made by the government as being ‘top-down law-making,’ or authoritarian law.

Though Orgaworld’s actions are considered illegal under our system of authoritarian law, it is clear that the prevailing legal framework has failed to provide a resolution. It appears that the polluters will be allowed to continue functioning indefinitely should they meet the requirements of regulatory agencies, which are quite independent from the property owners subject to Orgaworld’s violations.

In contrast, under a system of Customary Law, the people themselves (not the government) would play a prominent role in the legal process. In such a system, Orgaworld’s actions would be considered illegal, not because it is polluting the air per se, but because the affected neighbouring properties were owned and occupied prior to Orgaworld’s actions. This is a very important point, as Murray Rothbard explains with the homesteading concept:

“Most of us think of homesteading unused resources in the old-fashioned sense of clearing a piece of unowned land and farming the soil. There are, however, more sophisticated and modern forms of homesteading, which should establish a property right. Suppose, for example, that an airport is established with a great deal of empty land around it. The airport exudes a noise level of, say, X decibels, with the sound waves traveling over the empty land. A housing development then buys land near the airport. Sometime later, the homeowners sue the airport for excessive noise interfering with the use and quiet enjoyment of the houses.

“Excessive noise can be considered a form of aggression but in this case the airport has already homesteaded X decibels worth of noise. By its prior claim, the airport now ‘owns the right’ to emit X decibels of noise in the surrounding area. In legal terms, we can then say that the airport, through homesteading, has earned an easement right to creating X decibels of noise. This homesteaded easement is an example of the ancient legal concept of ‘prescription,’ in which a certain activity earns a prescriptive property right to the person engaging in the action.

“On the other hand, if the airport starts to increase noise levels, then the homeowners could sue or enjoin the airport from its noise aggression for the extra decibels, which had not been homesteaded. Of course, if a new airport is built and begins to send out noise of X decibels onto the existing surrounding homes, the airport becomes fully liable for the noise invasion.

It should be clear that the same theory should apply to air pollution. If A is causing pollution of B’s air, and this can be proven beyond a reasonable doubt, then this is aggression and it should be enjoined and damages paid in accordance with strict liability, unless A had been there first and had already been polluting the air before B’s property was developed. For example, if a factory owned by A polluted originally unused property, up to a certain amount of pollutant X, then A can be said to have homesteaded a pollution easement of a certain degree and type.”

Orgaworld is violating the property rights of its pre-existing neighbours. Orgaworld’s actions, as Rothbard noted, constitute “aggression and it should be enjoined and damages paid in accordance with strict liability.” Under Customary Law, such a legal remedy would have been immediately available to the neighbours after Orgaworld’s first violation many years ago. Authoritarian Law provides no such remedy.

In contrast, Orgaworld seems to be a winner. It has been fined, yet it continues to operate. It would seem that from Orgaworld’s perspective, fines are simply a cost of doing business — there are still profits to be made after fines have been paid to the government. Thus, it seems the government is also a winner because it retains the fine money for its own use, as it simultaneously pretends to “protect communities and the environment.”

The optics are not good. Orgaworld appears to be buying permission from the government to pollute the air of its neighbours.

The government is supposed to resolve conflicts, not create them. Perhaps it is time to reconsider how we make laws and protect property rights. 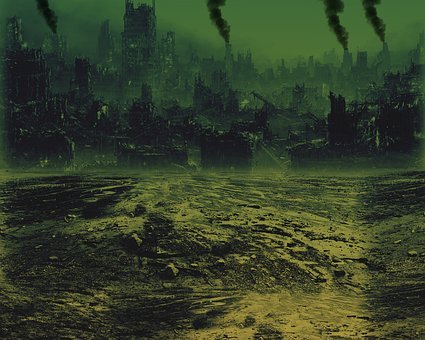 Following a 23-year career in the Canadian financial industry, Lee Friday has spent many years studying economics, politics, and social issues. He operates a news site at www.LondonNews1.com