What Would a World Without Property Rights Look Like?

No Privacy, no property: The world in 2030 according to the WEF

“The use of natural resources will be brought down to a minimum … a global agency would set the price of CO2 emissions at an extremely high level to disincentivize its use.”

Founded 50 years ago, the World Economic Forum (WEF) has gained increasing prominence over the decades. Today, it’s one of the leading platforms of futuristic thinking and planning.

As a meeting place of the global elite, the WEF brings together leaders in business and politics, along with a few selected intellectuals. The main thrust of the forum is global control. Free markets and individual choice do not stand as the top values; state interventionism and collectivism do. According to the projections and scenarios coming from the World Economic Forum, individual liberty and private property are to disappear from this planet by 2030.

Individual liberty is at risk again. What may lie ahead was projected in November 2016 when the WEF published 8 Predictions for the World in 2030. According to the WEF’s scenario, the world will become quite a different place, because how people work and live will undergo a profound change.

The scenario for the world in 2030 is more than just a forecast — it is a plan, one whose implementation has accelerated drastically with the announcement of a pandemic and the consequent lockdowns.

According to the projections of the WEF’s Global Future Councils, private property and privacy will be abolished during the next decade. The coming expropriation would go further than even the communist demand to abolish the property of production goods but leave space for private possessions. The WEF projection says that consumer goods, too, would no longer be private property.

If the WEF projection should come true, people would have to rent and borrow their necessities from the state, which would be the sole proprietor of all goods. The supply of goods would be rationed in line with a social credit points system. Shopping in the traditional sense would disappear, along with the private purchases of goods. Every personal move would be tracked electronically, and all production would be subject to the requirements of clean energy and a sustainable environment.

In order to attain “sustainable agriculture,” the food supply will be mainly vegetarian. In the new totalitarian service economy, the government would provide basic accommodation, food and transport, while the rest would be lent by the state. The use of natural resources would be brought down to a minimum. In cooperation with a few key countries, a global agency would set the price of CO2 emissions at an extremely high level to disincentivize the use of carbon.

In a promotional video, the World Economic Forum summarizes the eight predictions in the following statements:

1. People will own nothing. Goods are either free of charge or must be borrowed from the state.

2. The United States will no longer be the leading superpower, but a handful of countries will dominate.

3. Organs will not be transplanted but printed.

4. Meat consumption will be minimized.

5. Massive displacement of people will take place, with billions of refugees.

6. To limit the emission of carbon dioxide, a global price will be set at an exorbitant level.

7. People can prepare to go to Mars and start a journey to find alien life.

8. Western values will be tested to the breaking point.

In a publication for the World Economic Forum, the Danish ecoactivist Ida Auken, who served as her country’s minister of the environment from 2011 to 2014 and is still a member of the Danish parliament, the Folketing, has elaborated a scenario of a world without privacy or property.

In “Welcome to 2030,” she envisions a world where “I own nothing, have no privacy, and life has never been better.” By 2030, so says her scenario, shopping and owning have become obsolete, because everything that once was a product is now a service.

In this idyllic new world of hers, people have free access to transportation, accommodation, food “and all the things we need in our daily lives.” As these things will become free of charge, “it ended up not making sense for us to own much.”

There would be no private ownership of houses, nor would anyone pay rent, “because someone else is using our free space whenever we do not need it.” A person’s living room, for example, could be used for business meetings when one were absent.

Concerns like “lifestyle diseases, climate change, the refugee crisis, environmental degradation, completely congested cities, water pollution, air pollution, social unrest and unemployment” are things of the past. Auken predicts that people will be happy to enjoy a life that is so much better “than the path we were on, where it became so clear that we could not continue with the same model of growth.”

“By 2030, agriculture will offer mainly plant-based alternatives to the food supply instead of meat and dairy products. The use of land to produce animal feed will greatly diminish and nature will be spreading across the globe again."

In her 2019 contribution to the Annual Meeting of the Global Future Councils of the World Economic Forum, Auken foretells how the world may look in the future “if we win the war on climate change.”

By 2030, CO2 emissions will be reduced greatly, people will live in a world where meat on the dinner plate “will be a rare sight” while water and the air will be much cleaner than today. Because of the shift from buying goods to using services, the need to have money will vanish, because people will spend less and less on goods. Work time will shrink and leisure time will grow.

For the future, Auken envisions a city where electric cars have supplanted conventional combustion vehicles. Most of the roads and parking spaces will have become green parks and walking zones for pedestrians. By 2030, agriculture will offer mainly plant-based alternatives to the food supply instead of meat and dairy products. The use of land to produce animal feed will greatly diminish and nature will be spreading across the globe again.

Manufacturing consent for the great reset

How can people be brought to accept such a system? The bait to entice the masses is the assurances of comprehensive healthcare and a guaranteed basic income. The promoters of the Great Reset promise a world without diseases. Due to biotechnologically produced organs and individualized genetics-based medical treatments, a drastically increased life expectancy and even immortality are said to be possible. Artificial intelligence could eradicate death and eliminate disease and mortality. The race is on among biotechnology companies to find the key to eternal life.

Along with the promise of turning any ordinary person into a godlike superman, the promise of a “universal basic income” is highly attractive, particularly to those who will no longer find a job in the new digital economy. Obtaining a basic income without having to go through the treadmill and disgrace of applying for social assistance is used as a bait to get the support of the poor.

To make it economically viable, the guarantee of a basic income would require the levelling of wage differences. The technical procedures of the money transfer from the state will be used to promote the cashless society. With the digitization of all monetary transactions, each individual purchase will be registered. As a consequence, the governmental authorities would have unrestricted access to supervise in detail how individuals spend their money. A universal basic income in a cashless society would provide the conditions to impose a social credit system and deliver the mechanism to sanction undesirable behaviour and identify the superfluous and unwanted.

Whom will the new rulers be?

The World Economic Forum is silent about the question of who will rule in this new world.

There is no reason to expect that the new power-holders would be benevolent. Yet even if the top decision-makers of the new world government were not mean, but just technocrats, what reason would an administrative technocracy have to go on with the undesirables? What sense does it make for a technocratic elite to turn the common man into a superman? Why share the benefits of artificial intelligence with the masses and not keep the wealth for the chosen few?

“The world is getting greener and a fall in the growth rate of the world population is already underway. These trends are the natural consequence of wealth creation through free markets.”

Not being swayed away by the utopian promises, a sober assessment of the plans must come to the conclusion that in this new world, there would be no place for the average person and that they would be put away along with the “unemployable,” “feeble minded,” and “ill bred.”

Behind the preaching of the progressive gospel of social justice by the promoters of the Great Reset and the establishment of a new world order lurks the sinister project of eugenics, which as a technique is now called “genetic engineering” and as a movement is named “transhumanism,” a term coined by Julian Huxley, the first director of UNESCO.

The promoters of the project keep silent about who will be the rulers in this new world. The dystopian and collectivist nature of these projections and plans is the result of the rejection of free capitalism. Establishing a better world through a dictatorship is a contradiction in terms.

Free markets are the key

Not less but more economic prosperity is the answer to the current problems. Therefore, we need more free markets and less state planning. The world is getting greener and a fall in the growth rate of the world population is already underway. These trends are the natural consequence of wealth creation through free markets.

The World Economic Forum and its related institutions, in combination with a handful of governments and a few high-tech companies, want to lead the world into a new era without property or privacy. Values like individualism, liberty and the pursuit of happiness are at stake, to be repudiated in favour of collectivism and the imposition of a “common good” that is defined by the self-proclaimed elite of technocrats.

What is sold to the public as the promise of equality and ecological sustainability is in fact an assault on human dignity and liberty. Instead of using the new technologies as an instrument of betterment, the Great Reset seeks to use the technological possibilities as a tool of enslavement. In this new world order, the state is the single owner of everything. It is left to our imagination to figure out who will program the algorithms that manage the distribution of the goods and services.

Dr. Antony P. Mueller is a German professor of economics who currently teaches in Brazil. 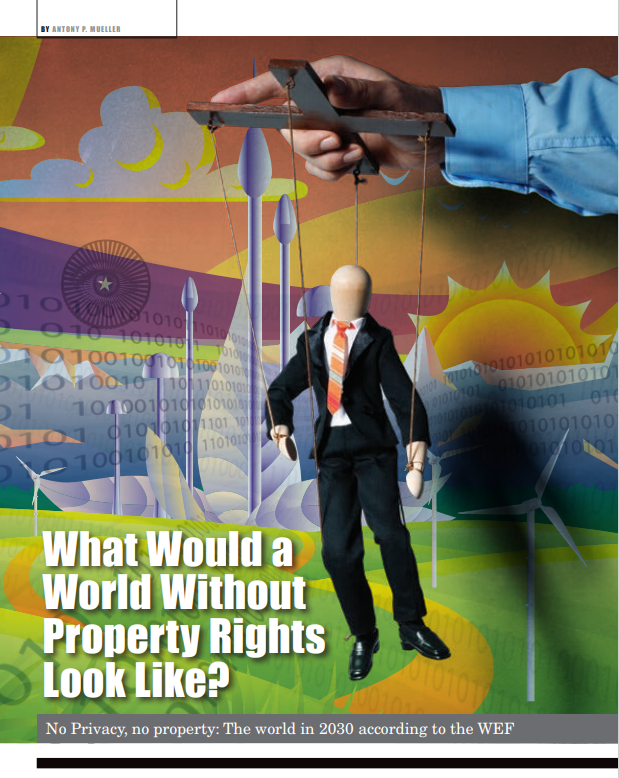 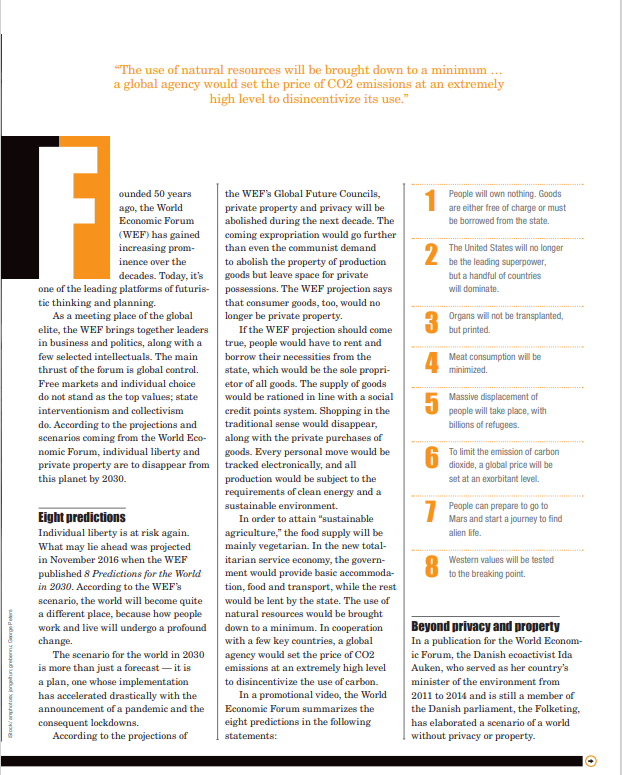 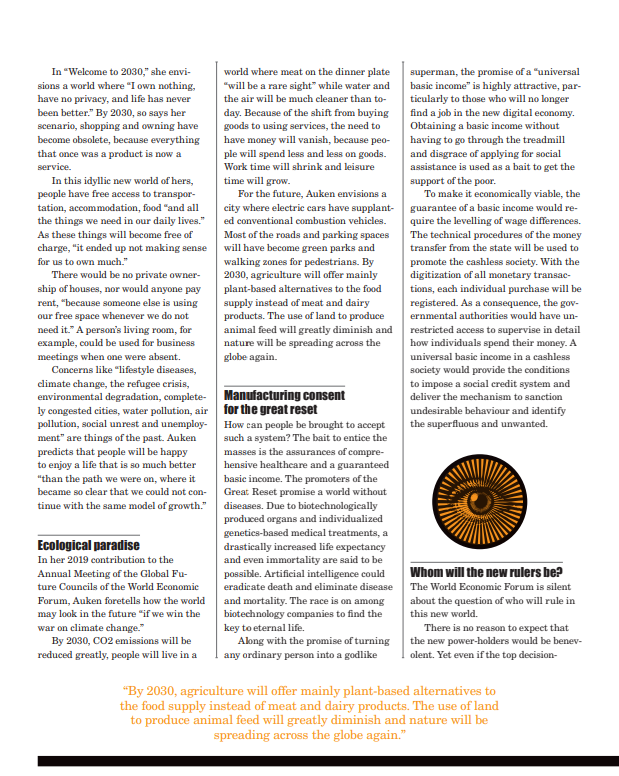 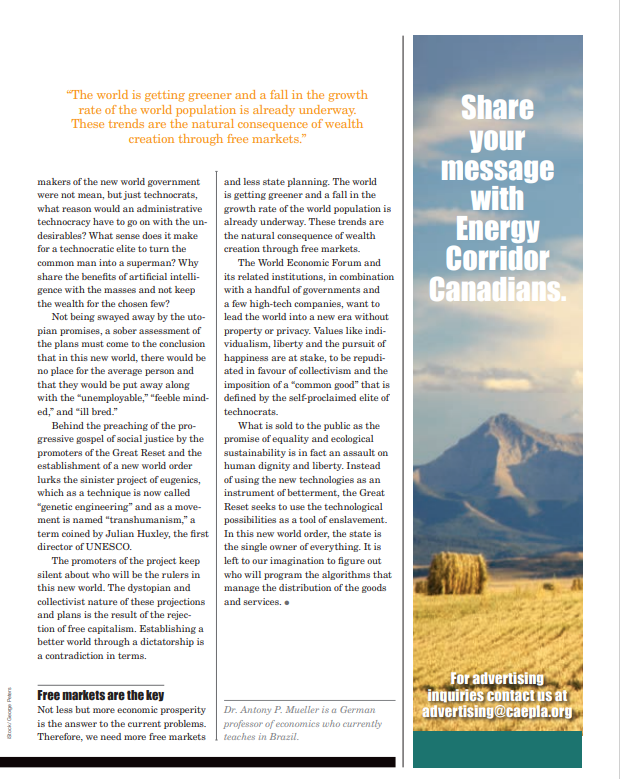