TF: Have you got oil and gas development for your nation?

DS: Yes, we’re part of a group of four first nations who had a deposit near Pigeon Lake. We’ve been getting royalties from that since the 1950s. It’s pretty much depleted now, but we’re still involved in the oil and gas industry. That was sweet crude, and there is an abundance of natural gas in my region as well. I worked for my band for 22 years, and left to work with pipelines and oil companies as a contractor. So I’ve been involved in the oil and gas industry my whole life.

TF: You were involved with the Northern Gateway project. Can you tell me about that?

DS: The National Coalition of Chiefs grew from the aboriginal equity partners, which was a group of 31 first nations who owned one third of the Northern Gateway project. And when it was cancelled, the chiefs were upset that they had lost $2 billion worth of benefits.

We decided that the model that we used for the aboriginal equity partners needed to be communicated across the country, because there were so many natural resources projects going on that in order to maximize the benefits we have to act as a group of community stakeholders.

The aboriginal equity partners proved that being in a coalition gets us a lot more opportunities for employment and business. We formed it in February of 2017. We had our first conference in April of 2018, with 26 chiefs there. We had our second conference in November in Vancouver, and that’s where we grew significantly to 62 chiefs. And this November we had 81 chiefs at our conference.

It’s pro-development, so we don’t invite everybody who wants to come. We warn them that this is not a venue for discussing concerns against the industry. This is where we talk cooperatively and develop partnerships, on the mandate that we’re here to defeat on-reserve poverty. We can’t do that without benefits from the natural resource industries.

TF: And jobs too, because we’ve seen situations where passive income is not a long-term solution?

DS: Yes. Our whole goal is to get the family structure back together. We are in this poverty and the social despair it causes by the fact that everybody is on social welfare, and there are no jobs for them to take up. We need to get the respect back for the first nation mothers and fathers, and in order to do that we need employment.

We’ve signed an agreement with the Aboriginal Skilled Workers Association, an association that has 700 skilled workers from across Canada. We’re working with them to develop training initiatives for first nations to participate in. We did a job fair, and recruited more than 300 potential employees in Stoney Nation, Piikani Nation [job fair] is coming up soon. Cold Lake First Nation, we just completed a job fair there. We’re moving across the country to do these job fairs in order to get the people to understand that there are opportunities out there and we can get them jobs.

We started the Indigenous Strong program, a group of industry workers getting together to share opportunities across Canada, for employment and training. We are promoting the development of two refineries, one in northern Alberta and another one in southern Saskatchewan. These are refineries that brought to us by chiefs who want to form an alliance to build them.

We signed an agreement with project reconciliation and Iron Coalition to promote the Trans Mountain project. We’re hoping to get not only employment and training and business opportunities with Trans Mountain, but to actually own part of it as well.

TF: Last I checked there were competing organizations looking at that.

DS: We brought together our organization, along with the Iron Coalition and Project Reconciliation. We signed a memorandum of understanding at the conference Nov. 4-5. We’re hoping the Western Indigenous Pipeline Group will also join us in getting a proposal in to purchase the pipeline.

DS: We met with the First Nations LNG Alliance. The former chairman of that alliance [Chief Dan George] is also chairman of the National Coalition of Chiefs. They suggested that we get in touch with Ellis, come out here and speak to the B.C. Liberal caucus to give them an opportunity to see what we’re all about. We’re about getting the message out to Canada that not all first nations are against projects.

TF: The NDP supports LNG too. There are three Green Party MLAs who are opposed, and protesters including the B.C. Teachers’ Federation. What’s your take on the continued opposition to these projects?

DS: The First Nations groups who are against it should respect the majority. The majority of the communities along the Trans Mountain right-of-way support the project. A small group of first nations should not be able to stop the growth and development of other first nations if they want to participate.

TF: And the LNG Canada project too.

DS: Like Trans Mountain, all the communities along the right of way support the project. There are some community members from that area who are financed by environmental non-government organizations to set up camps and so forth, and I think that’s just the wrong way to do it. It sends a message that we’re against project development, when in fact we’re for it. It’s the only way we’re going to stop being on the government payroll.

TF: I’ve talked with Calvin Helin with Eagle Spirit Energy, which is working on an energy corridor to the B.C. coast, a similar route to the Northern Gateway corridor, as it was. Conservative leader Andrew Scheer has talked about an energy corridor, with power lines as well as gas and oil. What do you think about that approach?

DS: The nine producers on the Northern Gateway route were asked by our group if it was ever going to come up again. Most of them said it’s very doubtful, but they would support an Indigenous-led pipeline if it viable and approved.

The problem we have now is Bill C-48, the federal tanker ban for the North Coast. Eagle Spirit Energy is a great project. I think we could develop a lot of interest from the communities along that right of way. But the first thing we have to do is get around the tanker ban.

Calvin has suggested that they go around and use a port in Alaska. That’s another possibility. 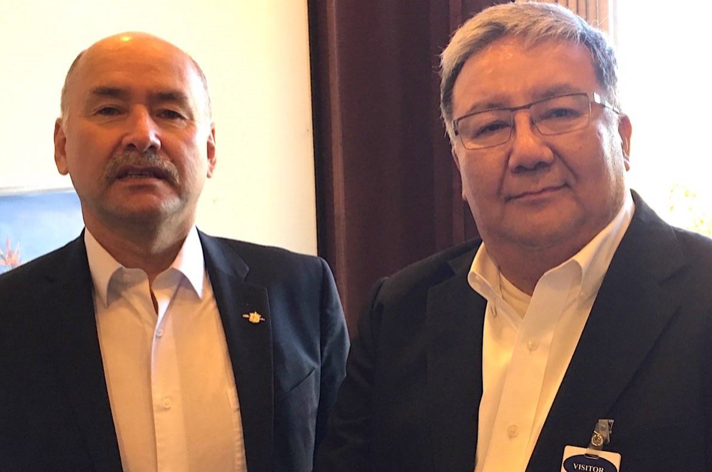