New research reveals a surprising relationship between farmers and the invention of property rights.

“People think of a ‘right’ as something enforced by a government. But private property rights definitely predated governments.”

Ever since farming emerged almost 12,000 years ago in what is today Iraq, people have been fascinated by how it came about, and survived in a world where hunting and gathering still provided more calories and healthier populations.

Many scholars have long believed that to ensure farming’s long-term survival, property rights were conceived out of necessity.

It is one of the world’s oldest “chicken and egg” riddles that now appears to have been solved.

A new report, by economists Samuel Bowles and Jung-Kyoo Choi at the Santa Fe Institute, finds that farming, by itself, could not have driven property rights. But quite the opposite is true. It turns out farming was unlikely ever to have evolved without property rights — and won’t survive in the future without them.

The Canadian Association of Energy and Pipeline Landowner Associations (CAEPLA) has long argued that the threat posed to property rights by governments and their regulators is by extension a direct threat to your farm and family.

CAEPLA talked to scholar Samuel Bowles about what he has unearthed and learned about this vital relationship.

Q: What sparked your interest in the connection between farming and property rights? Why does the relationship between the two matter?

Bowles: One of the big challenges today is to figure out what institutions can allow us to best organize our system of production and distribution in light of the rapidly changing technologies of the knowledge-based economy. Learning about a similarly huge change in technology — the origin of farming over 11 thousand years ago — and how that interacted with the spread of a new set of institutions—private property — may give us some clues about improving how our economy works today.

Bowles: The evidence that we have discovered points to rare pockets of pre-existing private property among hunters and gatherers kicking off this chicken and egg process. But once it got rolling, it was a two-way street. The increasing scope and security of private property provided an institutional environment in which farming could flourish. And the expanding farming economy broadened the range of application of private property rights.

Q: Most people agree one of the core responsibilities of government is to protect property—but is it not the case that property rights predate the State?

Bowles: Great question. Spiders have property rights in their webs. I don’t think they have governments. People think of a “right” as something enforced by a government. But private property rights definitely predated governments. They were maintained by mutual consent and by cooperation among people in punishing anyone who violated them, akin to some social norms today, like “finders, keepers.” Among humans, and in modern societies, governments have a comparative advantage in enforcing most rights. But rights can exist without governments.

Q: Can farming survive without property rights today? Is it safe to say that the agricultural failures of Communist countries were, and are, due largely to the lack of property rights?

Bowles: Farming today and during the Neolithic age alike is best served by a system of private property rights. But today these cannot include the right to use methods that degrade the environment and impose costs on other farmers or on the biosphere. I am thinking of Monsanto’s weed killer Round-up, and the damage it did.

Bowles: Absolutely. Australia, California, the Western Cape of South Africa, contain prime farmland (that is now extensively farmed) but did not adopt farming until the Europeans arrived bringing our property rights institutions with them. A good case can be made that the Australians never farmed. This was not, as some think, because they lacked species that could be domesticated (they had many and exploited them in the wild); or because they never “invented” farming—they were connected by a land bridge to New Guinea, and regularly interacted with farmers there; but because they did not have suitable property rights. In the paper, I quote Captain Cook remarking on how odd it is that the Australians did not farm.

“CAEPLA has long argued that the threat to property rights by government is a direct threat to your farm and family.”

The Santa Fe Institute is an independent, non-profit research and education center that leads global research in complexity science. 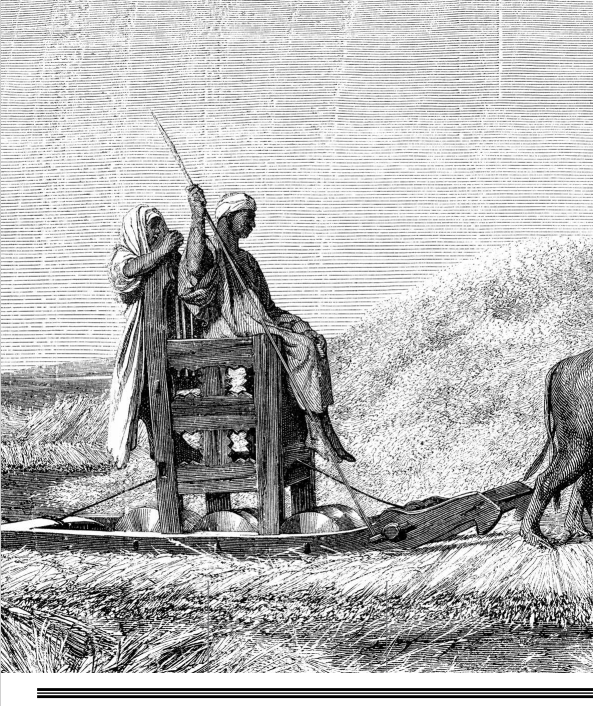 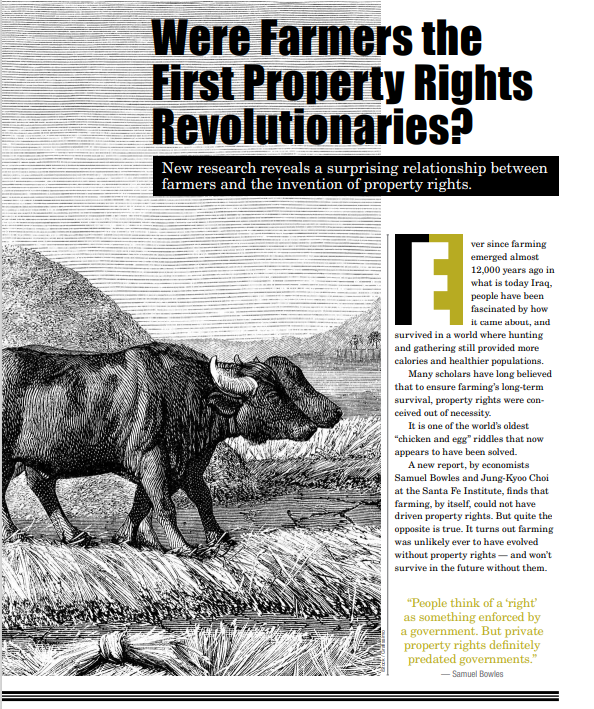 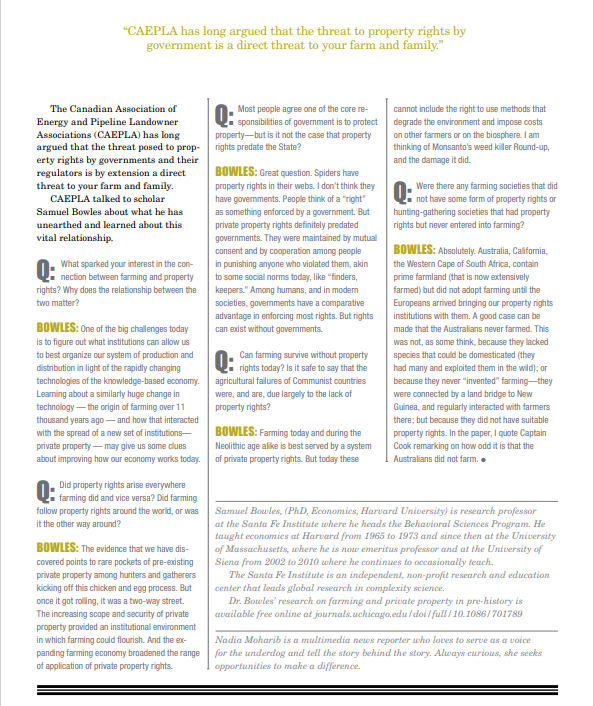