Well, That Was a Weird Year

“The more CAEPLA delved into how decommissioned and abandoned pipelines age and corrode, the more we realized that we were on the cutting edge.”

The year 2020 affected us all in many different ways. For example, Zoom — little-known before the pandemic — became the default way of having meetings. At CAEPLA, we continued to be busy protecting landowner property rights. So, in the spirit of new technology, allow me to take you on a “virtual” tour of the issues that CAEPLA has been working on.

One area of our research has been the decommissioning of pipelines. Decommissioning is really pre-abandonment. Pipes are left “in place.”

Some of the concerns landowners have about old pipe include its corrosion rate — the number of years before a pipe will corrode and collapse under the weight of farming equipment. Other worries include the pipe acting as a water conduit, as well as the loss of topsoil, which can begin to seep into the abandoned pipe once it has begun to perforate.

As part of the win-win agreement on the Line 3 replacement project, CAEPLA and Enbridge worked together with the University of Calgary to research timelines for how fast the corrosion can be expected to occur — so that landowners can have peace of mind. Landowners farming over the pipe cross over it many times in a growing season, and safety is of utmost importance.

CAEPLA continues to pursue further research into this topic. Beyond the modeling of pipe corrosion in a university lab setting, we will be working further with Enbridge on “real time” research on the company’s decommissioned pipe.

This, of course, will be a long-term research commitment. Pipe will be taken from the corridor and examined, looking at rates of corrosion, the soil type the pipe is in, and much more.

Another research project on which CAEPLA continues to work is soil capability. The question the research will attempt to answer is this: “Have the soils on pipeline rights-of-way suffered damage that will diminish their productive capacity, especially over the long term?”

Dr. Ivan Whitson described the research he is conducting on soil capability in the Fall 2019 Pipeline Observer, in the article “CAEPLA Studies Agricultural Land Capability on Pipeline Rights-of-Way.”

Samples have been taken from about a half dozen different soil types along Enbridge’s Line 3 corridor. Whitson will be testing the soils from both on and off the right-of-way to determine the degree of chemical and physical change in soil quality.

As Whitson wrote in 2019, the findings from this research “may provide insight toward the effectiveness of construction practices and mitigations used by industry over the last six decades…. This research will also provide a monitoring model that holds both industry and regulators to their promises.”

Soil remediation after pipeline construction is extremely important, and Enbridge finished the Line 3 construction remediation work last summer. Repairs will be made this spring and summer after the soil has settled over winter for any areas requiring further attention.

As was the case throughout the construction of the L3RP, CAEPLA’s independent construction monitors, provided through Infocus Management Consulting, were on scene to ensure that the remediation work was done according to the Settlement Agreement.

Farther west in southern Alberta, CAEPLA was asked for help by a landowner on the Keystone XL pipeline. Arnold McKee has the pipeline on his property. He was part of the group of landowners for whom CAEPLA negotiated a win-win agreement with TransCanada Pipelines (now TC Energy) about 12 years ago. The Keystone XL agreement was negotiated at the same time, and after numerous delays, the expansion project was being built in Alberta last summer.

Arnold was not opposed to having the pipeline, he simply wanted it built in the winter so it wouldn’t harm his horse-breeding operation. His very real concern was for the horses, a special breed that is irreplaceable.

The company insisted it could not build the pipe on his property in the winter and, after a number of stressful meetings for Arnold, CAEPLA was able to help find a solution that worked for the company, for Arnold and for the safety of his horses.

Respecting the property rights of landowners always makes for a better project. As a pipeline company CEO once told us: an easement agreement is like a marriage where you’re in it for the long haul. It is much better to have a respectful, beneficial agreement rather than one born out of conflict.

These are words to describe the experience of the small community of Laidlaw, B.C., which is being overrun by the Trans Mountain pipeline (TMX) owned by the Canadian government. The community has a pipe yard on one end of its road, a worker camp on the other end and a proposed storage yard in the middle. TMX has not consulted with the community. As one landowner described it, “TMX is telling us what our concerns are, rather than actually consulting and listening to what our concerns are.”

The Canadian Energy Regulator (CER) has granted Trans Mountain exemptions from conditions placed on it by its predecessor, the National Energy Board (NEB). It has also granted numerous rights of entry — in other words expropriation of property — from landowners unwilling to sign the bad easement agreement the company is offering.

CAEPLA received calls from landowners saying they have been bullied by TMX land agents, are being expropriated and don’t know what to do. If you are a landowner unsure of where to turn, give CAEPLA a call.

This is just a short tour of the issues CAEPLA is working on. We are also working on updating integrity dig agreements and working with landowners who have contamination issues on their properties. Of great concern regarding property rights is the CER bringing Indigenous monitors onto private property (see the special feature “Another Quiet Revolution” in the Summer 2020 Pipeline Observer).

As I conclude this tour, I’ll touch on the CAEPLA workshop series — an event that has been delayed by the demands for isolation.

Everyone who’s attended these events knows that they’re all about meeting other pipeline landowners face-to-face over a hot meal to discuss pertinent pipeline issues that affect your property. And they’re about having both CAEPLA, your landowner association, and Enbridge experts in the room at the same time to answer your questions so that real learning and trust can take place.

It’s about community. We look forward to seeing you again — so check your inboxes for our newsletter that’ll let you know when we’ll all be getting back together! 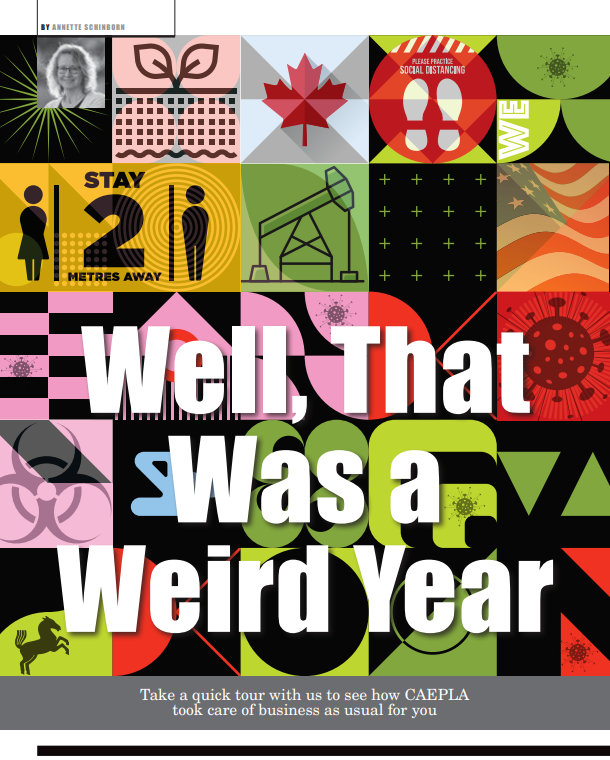 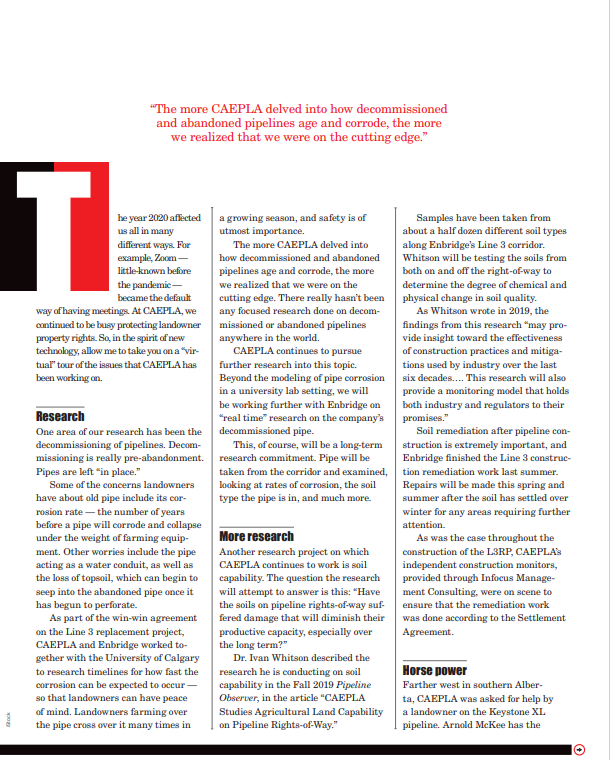 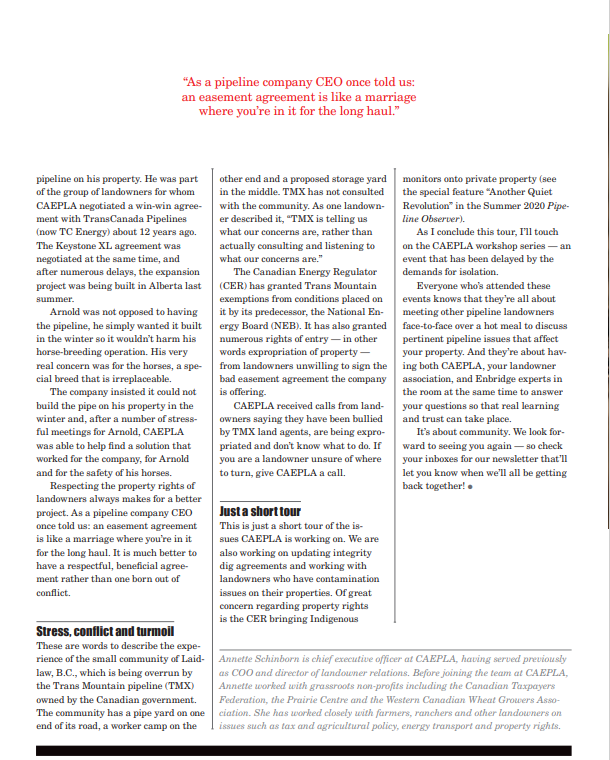