Be careful what you wish for, because taxpayers will be eating the expanding costs of TMX.

Add up every dollar Ottawa has committed to Trans Mountain since Morneau bought it and taxpayers are at risk for $20.7 billion the day the project goes into service.

Ottawa tells us not to worry. Trans Mountain’s expansion will earn money when it begins operating sometime in 2023. Except, those revenues won’t cover what Ottawa has ponied up. The shortfall is a subsidy of about $11.7 billion.

This is how the math works.

There were two price tags for Trans Mountain. The first, $3 billion for a 66-year-old pipeline. The second, $1.5 billion for the right to build the expansion.

Ottawa borrowed the money to buy TransMountain and channeled it through the Canada Development Investment Corporation (CDEV) at an interest rate of 4.7 per cent per year. The principal repayment is due five years from the purchase date.

Trans Mountain is a federally regulated pipeline so the Canada Energy Regulator (CER) approves the tolls it can charge to shippers who send oil products down the pipeline. When Trans Mountain sought approval for the tolls on the existing pipeline it failed to ensure those tolls would be enough to cover the $3 billion used to buy it. None of that principal and only half the interest expense is covered by the tolls, and those tolls are locked in for at least three years

Canadians are at risk for the shortfall and this explains why Trans Mountain has been losing money since Ottawa bought it. The taxpayer funded toll subsidy amounts to $3.4 billion over five years.

That’s on the existing pipeline. How much will Trans Mountain’s expansion end up costing?

Morneau promised to tell us what the expansion would cost when he shocked Canadians by announcing we would buy it. We were assured that if Ottawa knew it was going to buy Trans Mountain by July 22, 2018, Canadians would be given an update on the construction cost. That date came and went.

When the project was approved by Prime Minister Trudeau in June 2019, we were again promised an updated cost, but none was provided. Trans Mountain CEO, Ian Anderson said at the time that “There is no update on the last estimated project cost of $7.4 billion.”

At its annual general meeting on December 11, 2019, CDEV’s chair, Steve Swaffield was asked for a budget update. He said “we’ll need more clarity on the project’s schedule before we can determine the costs.”

It seemed very strange that the people responsible didn’t know the cost for the project but were proceeding with construction based on a $7.4 billion estimate prepared almost three years earlier. That is not how major projects are built. Either they were guilty of gross mismanagement if they didn’t know the likely cost, or they were guilty of misleading the public by withholding it.

Finally in February 2020, Trans Mountain announced the bad news. The cost to build the expansion, including contingency, had skyrocketed to $13.2 billion.

An increase of this magnitude might not be a problem if Trans Mountain could pass this increased cost onto shippers through higher tolls. The problem is, Ottawa decided to give the shippers a toll rate exemption on the expansion too. This is where the huge subsidy on the expansion comes in.

Ottawa capped the construction budget at $7.4 billion with only 25 per cent of the costs beyond that amount passed on in shippers’ tolls. What this means is that for every dollar spent on the project above $7.4 billion, Trans Mountain — and by extension Canadian taxpayers — bear 75 cents. At a capital cost of $13.2 billion, Canadians have been put at risk for $4.4 billion of the project’s likely cost.

Taxpayers at risk from hidden subsidies, too

Then there’s the $1.5 billion Oceans Protection Plan which is a subsidy because Trans Mountain’s shippers told the CER they expected to pay any marine protection costs related to the project. Trudeau decided to put the cost on the backs of Canadians instead. Even at a pro-rata share for the West Coast, the cost is about $600 million, every five years.

We can’t forget the $500 million payment guarantee to BC. These costs are not included in the project’s budget, but Trans Mountain still has to pay them, so they are a taxpayer funded subsidy too. And then there’s the $1 billion that the CER requires must be on hand for inevitable oil spills.

But there’s more because Ottawa is debt financing the cost of building the expansion. We need to add $9 billion more in obligations beyond the subsidies. We find that Ottawa is into Trans Mountain’s rescue for a whopping $20.7 billion.

When Trans Mountain’s expansion becomes operational Ottawa will have committed more than $20 billion dollars in taxpayer funds to the project knowing tolls will repay less than half. Hardly a sound investment when more than half the cost for getting this pipeline built will be subsidized by Canadian taxpayers. 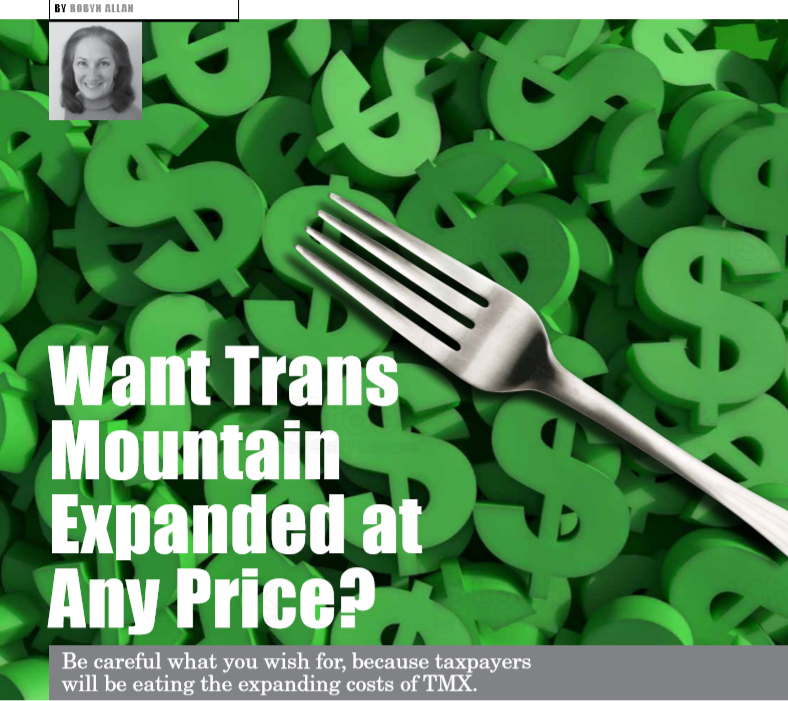