When a federal court killed the National Energy Board’s approval of the Trans Mountain expansion (TMX), Vancouver mayor Gregor Robertson declared, “this decision is a monumental win for the rights of Indigenous peoples and all of us who stand with them.”

One of the unfortunate tendencies in modern democracy is the crude tribalism that appeals to people as if they were part of some collectivist blob with uniform interests, rather than a multitude of individuals and groups with their own goals and values.

This is especially true in the Canadian public dialogue about Indigenous peoples.

Presumably the Federal Court of Appeal decision on TMX was a big victory for the dozen or so Indigenous applicants in on the appeal.

But what about all the Indigenous groups who support the Trans Mountain expansion?

Kinder Morgan approached more than 130 Indigenous groups to seek support for the TMX project (now embarrassingly owned by Ottawa). Project opponents will eagerly point out that a majority did not support the project.

Yet every Indigenous group whose reserve lands actually touched the project did end up giving their support to TMX.

Remember that the federal court that quashed the TMX approval said Ottawa failed to adequately consult with Indigenous groups. Would the groups directly affected by the project that gave support say they were inadequately consulted? Probably not.

This legal challenge didn’t come from Indigenous people as a unified group, but only a small minority allied with the cities of Vancouver and Burnaby and radical environmental organizations.

Consider another story: the massive $16 billion Eagle Spirit Pipeline proposal. This is even larger than the Northern Gateway project that was killed by the Trudeau government.

This proposal not only has Indigenous support along the right-of-way, but would be owned and spearheaded by them.

Despite this support and encouragement from major energy producers, there is a huge obstacle: the new tanker moratorium Ottawa imposed on B.C.’s north coast. As long as that’s in play, Eagle Spirit is dead in the water.

Please think carefully about what’s happening here. When is it fair for one group’s values to override others? How does a society resolve these sorts of clashing interests?

What if some of Canada’s Indigenous groups want pipelines and tanker traffic and others don’t?

The Indigenous groups that want pipelines and resource development also care about the environment and they do not need anyone to speak for them, nor do they want some distant minority to obstruct their goals.

Many Indigenous groups clearly support oil and gas production and the infrastructure needed to get those resources to the best consumer (to get the best price). Others want nothing to do with the fossil fuel industry.

That’s fine in and of itself. The problem is Indigenous people don’t really get to make their own choices on what is supposedly “their land.” What if they could? What if pipeline projects and energy development did not need to be held captive by politicians, environmentalists, or some minority of Indigenous people claiming to speak on behalf of all Indigenous Canadians?

The “classical liberal” solution to this kind of problem was sovereignty and self-determination.

Basically, Ottawa is letting them use the land but without the full rights of ownership and sovereignty. Indigenous Canadians are like tenants and Ottawa is the landlord. This inevitably creates conflict, especially when you get into the legal minefield of things like “duty to consult”, which basically no one understands.

But what if our country abandoned the reservation system and simply ceded huge tracts of land with coastal access to our Indigenous people? What if bands could use the land how they see fit—even sell it if they wanted?

What if Indigenous communities had full sovereignty to choose anything from maximum resource development or leaving land completely untouched? What if they could negotiate their own agreements with pipeline companies and other distant bands would have no say in the matter?

What if the politicians in Ottawa or Vancouver—who are far away, well paid and comfortable yet blind to the economic needs of Indigenous people in remote areas—had no control over whether something like Northern Gateway got built?

Many great political philosophers have pointed out that there are no real conflicts of interest between free people. Sovereignty means one group has control over its own affairs and other groups control theirs.

Instead of turning people against each other, sovereignty allows people to pursue their own destiny.

In practical terms, true sovereignty would lead to more major pipeline projects and more enrichment of Canada’s Indigenous communities, while actually respecting their rights instead of pitting people against each other.

For the sake of our energy industry and the fortunes of Canada’s Indigenous peoples, we need to start seriously considering radical ideas like this.

C. Kenneth Reeder is a Calgary financial analyst providing mergers and acquisitions advisory services for midsized, privately held companies in  Western Canada. He works with many clients in the oilfield services sector.  He is also the editor of canadianmarketreview.com 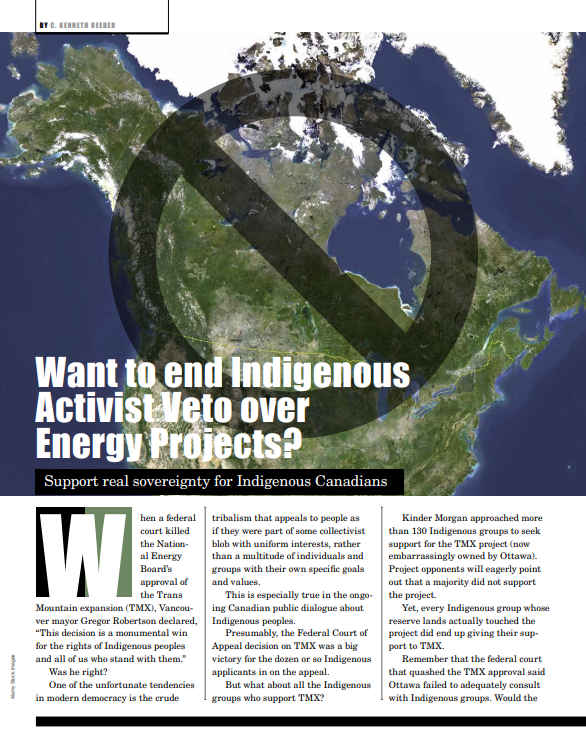 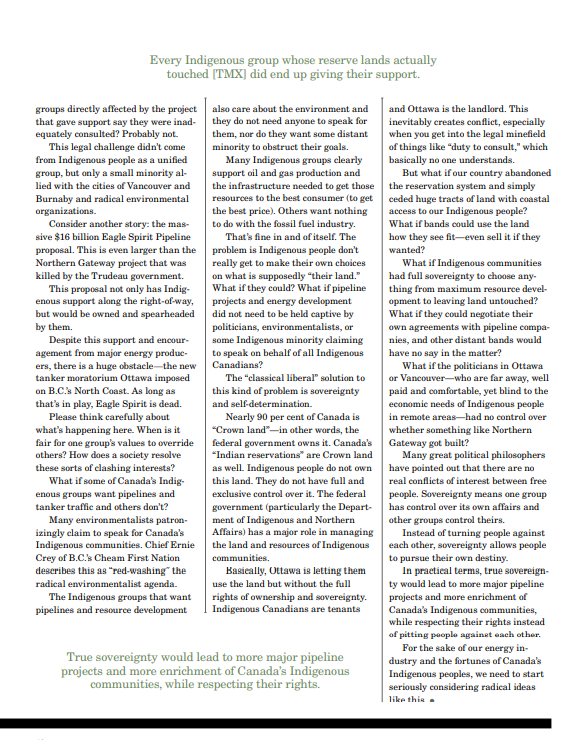