In Corey Drake’s opinion, the sky’s the limit for this project.

Testing and analysis will be carried out by C-FER Technologies (1999) Inc. of Edmonton, a leading-edge engineering firm with a world-class laboratory and a first-rate reputation.

This project will test the boundaries of scientific innovation – because, to this point, the available technologies have not been tested on such a large scope, or such a fine detail.

“The main challenge here is that the vendor focus to date has been largely on gas pipelines. There is no ready, out-of-the-box solution for aerial leak detection on crude oil and liquids pipelines yet, as far as we know . . . and that’s what makes it so exciting,” says Drake, C-FER’s lead engineer on this aerial leak detection project, which also includes data analysis by Alberta Innovates – Technology Futures.

“We’ll need to put these technologies through some rigorous third-party testing, and evaluate their sensors for the purpose. Collaboration with the vendors, through sharing of test results, will go a long way in advancing the technology for liquid pipeline leak detection,” Drake adds. “Once we reach the stage of full-scale testing, it will be pretty thrilling to see these technologies perform in the field, get them mounted on aircraft – and, ultimately, improve pipeline safety.”

Currently, representatives of C-FER Technologies, Kinder Morgan, TransCanada and Enbridge are determining the viability of airborne technologies for detecting small leaks from pipelines. From there, a set of suitable vendors will be determined. Project research and field trials in the Edmonton area are tentatively planned to follow in late 2015, based on the readiness of the technologies.

Potential technologies to be tested may include infrared camera-based systems, laser-based spectroscopy systems and flame ionization detection systems with sensors suitable for mounting on light aircraft or helicopters.

“Enbridge puts much of its pipeline safety focus on prevention, but we’re also committed to identifying and testing new technologies in the area of leak detection,” says Tania Rizwan, a senior research engineer with Enbridge’s Pipeline Control Systems and Leak Detection (PCSLD) department.

“We’re hopeful that this aerial-based leak detection project will eventually result in another layer of public safety and environmental protection that can be used industry-wide.”

About 15 to 20 employees from C-FER, Kinder Morgan, Enbridge, TransCanada and Alberta Innovates – Technology Futures are expected to be involved through the life of the project. 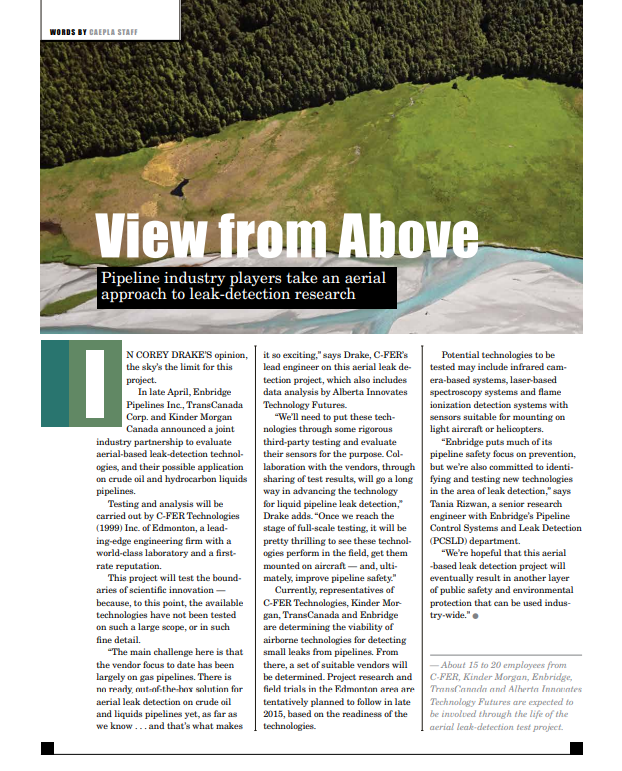