Victory for Canada’s Largest Ranch a Win for Landowners

Contrary to the wishes of CBC legal “experts,” property rights upheld in B.C. Court of Appeal

This spring, CBC reported that a decades-long legal battle in B.C. “exposed gaps in provincial legislation” related to property rights.

The decision from the B.C. Court of Appeal is an important restatement of the law regarding property owners’ legal authority to deny trespassers access to agricultural lands.

The battle concerned a privately-owned parcel of ranch land in the B.C. interior that cut off access to two publicly-owned lakes making it impossible for the members of a nearby recreational club to access the lakes without crossing private land. The court decided that even though the lakes were publicly owned, the recreational club members were not permitted to trespass in order to use them.

“Weak legal recognition of property rights inevitably leads to a tragedy of the commons where scarce resources are squandered...”

Legal experts, CBC’s narrative claimed, bemoaned the decision saying, “There has to be a common solution that respects private property rights but at the same time acknowledges there is a public right to access public resources.”

Wait... a public right to access public resources? That is nothing short of a gross misrepresentation of what was at issue in this case.

This case was about whether members of a recreational club could enter and use a rancher’s land without authorization to access the lakes. It was a trespass case. It was a property rights case.

This gap-in-the-law hypothesis proffered by CBC’s legal expert is an unabashed plea to undermine hundreds of years of case law that developed the important institution of property rights, and all on account of a perceived (and fake) harm. Experts of all stripes should be more circumspect when offering policy recommendations that are out of step with the legal traditions that have served us so well.

Even though Canada’s Constitution, written and unwritten, contains no specific mention of property rights, making it nearly one-of-a-kind in the entire world, these fundamentally important rights are protected by Canadian law and custom.

In 1978, the Supreme Court of Canada said the Anglo-Canadian legal tradition has historically “recognized, as a fundamental freedom, the right of the individual to the enjoyment of property and the right not to be deprived thereof, or any interest therein, saved by the due process of law.”

Property rights are often described as a “bundle of rights” which include, among other things, the legal authority to possess and control and to exclude others from what is yours. When these legal rights are present at once, it comes close to what people mean by “ownership.”

Property rights have a long history in our tradition because they more regularly lead to better results than any alternative would. Property rights make prosperity and security possible by rewarding development and innovation. They lead to improved productivity and efficiency while promoting the type of society where we are free to pursue our own good in our own way without undue interference. Thankfully, this is our tradition.

Alternatively, attenuated and weak legal recognition of property rights inevitably leads to a tragedy of the commons where scarce resources are squandered because, without a clear proprietary interest, there is no incentive to preserve, maintain or improve. Societies with weak legal protection for property rights have more conflict and violence, citizens are more frequently pitted against each other and it’s always vulnerable groups that inevitably bear a disproportionate burden.

An interesting side note is that the ranch owner — the Douglas Lake Cattle Company — did attempt to meet public demand halfway. The company built a lodge offering guests legal access to the lakes and the invitation to enjoy its land. It seemed like a reasonable compromise. But that was not enough. The club members want to use the land on their terms, not the property owner’s, and want to have the same right to control the land.

Unlike what some experts might say, the Court of Appeal’s decision is a good one. It recognizes both the instrumental value and fundamental importance of allowing property owners to possess, control and exclude. Property rights should allow ranchers to prevent trespassers from interfering with ranching operations. Disputes like this should not be transformed into a negotiation between a legally recognized property owner and interlopers who, without legal authority, want to use someone else’s land for their own benefit.

Property rights should be sacrosanct and inviolable. Reading the decision, a successful appeal to the Supreme Court of Canada overturning this ruling is unlikely. And for the moment at least, the Douglas Lake Cattle Company and all property owners can breathe a sigh of relief.

Derek From is an associate at WKA Lawyers in Airdrie, Alta. He was raised in Saskatchewan and earned degrees in religious studies, philosophy and law from Briercrest College and Seminary, the University of Waterloo and Western University respectively. After graduating from law school, From practised constitutional law with the Canadian Constitution Foundation for over 10 years. During that time, he advocated for individual liberty, limited government and property rights while frequently appearing in the broadcast and print media discussing constitutional and policy issues. 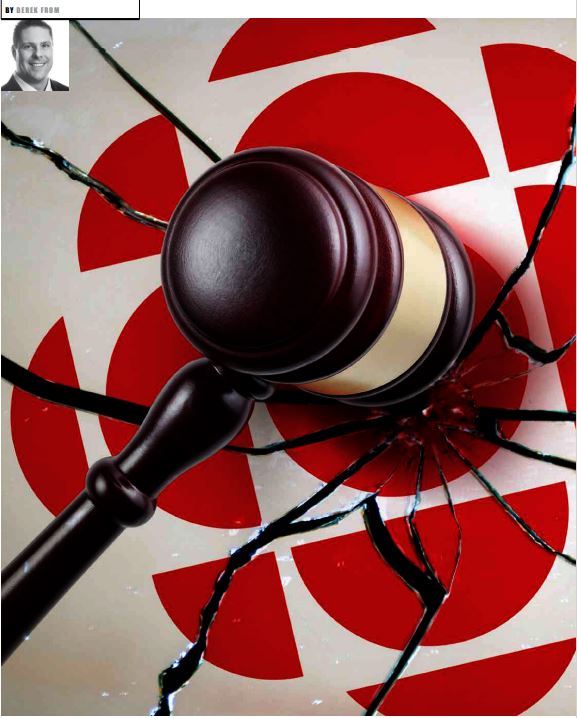