In a way, Canadians live in a bubble. We are connected directly to the United States by geography, but far removed from the rest of the world by distance and oceans.

In today’s global market, that’s irrelevant. Today there’s a drive to get Alberta oil to markets via pipelines. But the routes are blocked. Why? What makes it so different from the thousands of kilometers of pipelines laid before this time?

The answer lies in undue influence from various offshore forces funding local, on-the-ground Canadian environmental, non-governmental organizations (ENGOs), many of which are registered charities. That means taxpaying Canadians are unwittingly supporting anti-oil/anti-coal/anti-resource development groups, against the interests of Canada.

A 2016 report by the Friends of Science Society, Keep Canada in the Black, exposes the trail of Canadian taxpayers’ money being used by domestic and offshore ENGOs. These ENGOs claim Canadian oil is highly subsidized. Our research reveals the opposite is true. Canadian resource companies are taxpayers, as are their employees, and the alleged subsidies are either loans via Export Canada (which are paid back, and therefore not subsidies), or they are admissible tax write-offs that any corporation in Canada can claim for development. In other words, no subsidy and no special treatment.

A second report entitled Undue Influence—Markets Skewed, reviews how a seemingly simple policy set in the United Nations Principles for Responsible Investment, combined with voluntary reporting of the “carbon footprint” of corporations and cities, has led to the creation of a kind of black list of fossil fuel and resource companies.

Because Canada is rich in resources, this has hit our economy hard. Institutional investors who hold trillions in pension funds have been encouraged to divest of hydrocarbons and warned off the alleged “carbon risk”—meaning many of these resource companies have invested in wind or solar energy to look more “green” and remain attractive to investors.

Activists and ordinary citizens have taken this to mean that the so-called “renewable energy” generated by wind and solar are viable alternatives to conventional oil, natural gas and coal, but this is not the case at all. In fact, all “renewable” energy needs barrels of oil for its very existence!

According to an August 10, 2010 report in Forbes, the world runs on three cubic miles of oil-equivalent energy (CMO) every year. One of those CMO is actually oil! The balance of the energy breaks down to 0.8 CMO coal, 0.6 CMO natural gas, 0.2 CMO each for hydro, nuclear and wood. And at the bottom of the scale, wind and solar only provide 0.01 CMO of energy to the world—and then only intermittently.

The Friends of Science Society has spent more than 14 years examining climate science, but more recently we’ve engaged in some geopolitical review. It is clear to us that the science on climate change is uncertain.

For the past 18+ years there had been no significant global warming, despite a rise in carbon dioxide, yet environmental non-governmental organizations (who you would think would be cheering the news that our planet is not burning up) have instead continued to demonize oil and other valuable hydrocarbons like coal. Meanwhile, evidence grows that climate change is not driven by carbon dioxide, but carbon dioxide rise is a consequence of natural warming, according to Dr. John D. Harper, former director of the Geological Survey of Canada.

Numerous geopolitical forces are at play, blocking the development of our natural resources—and they are active on our own soil. According to a U.S. Senate Minority report, a club of billionaire philanthropists have dropped billions on local ENGOs in various regions of Canada and the world in order to sway social license and investments away from our oil, gas and coal industries.

Page 58 of the U.S. Senate Minority report even refers to some of the authors of the LEAP Manifesto as being funded by offshore groups who want to “keep it in the ground” and “change the world.” Canadians should ask why unelected, unaccountable ideologues, funded by offshore, agenda-driven groups, have any right to block Canadian economic development.

Canadian charities are given special privileges in recognition of their mandate to “benefit the public.” It is hard to see what the benefit is of blocking economic development, putting thousands out of work, smearing Canada’s reputation, and doing it with offshore money as the long fingers of some extended geopolitical warfare for turf and valuable resources.

There’s more! Geopolitics from Europe also play a role, as noted in our report, Post Paris… The only way to repair our damaged reputation is to stand up for our energy and energy transport industries—and jobs.

Michelle Stirling is the Communications Manager for Friends of Science Society. 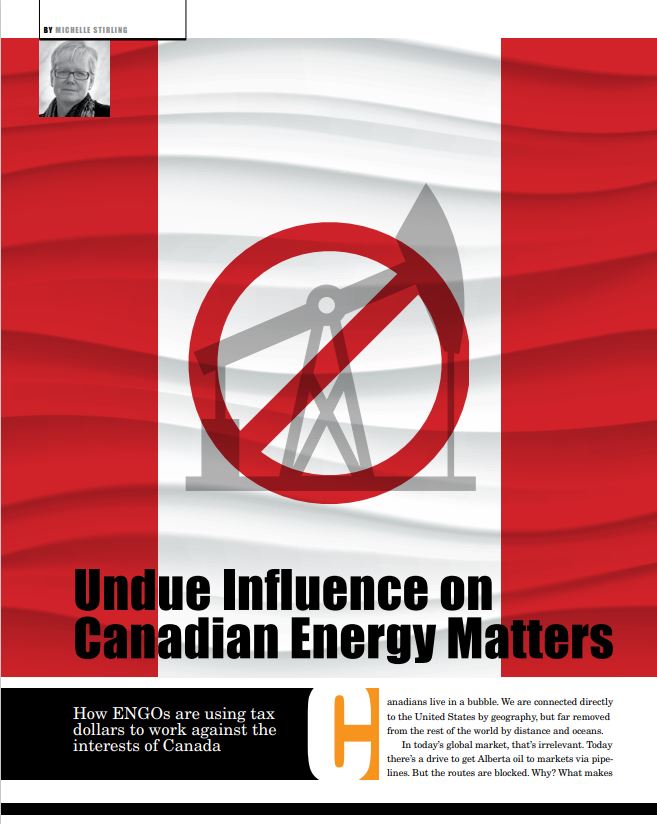 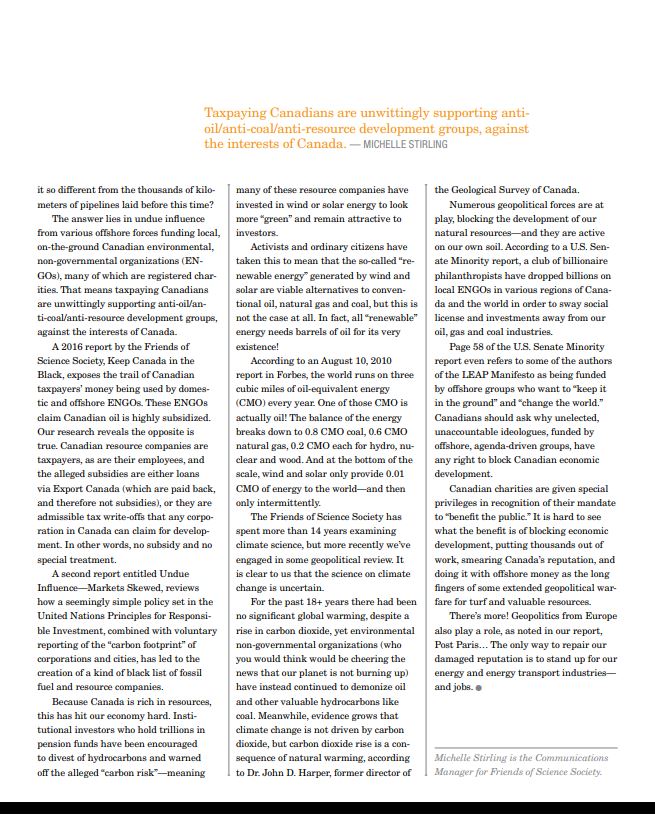