Residents who live near the Burnaby Mountain tank farm operated by Trans Mountain have long feared the safety of the existing tanks.

Some have expressed concerned that a few of the current tanks were built in 1953. You can read more about the tank concerns in this April 2019 NOW article.

“For years, Burnaby’s fire department has been highlighting to the federal government’s National Energy Board the many significant public safety risks posed by the tank farm on Burnaby Mountain – by both the existing tanks and those now proposed to be added as part of the federal government’s Trans Mountain expansion project,” said a 2019 statement by Burnaby Mayor Mike Hurley, a former firefighter.

Trans Mountain has responded to these concerns by touting the company’s safety record.

“In 65 years of operation, we’ve never had a storage tank fire or structural incident with one of our tanks. Although tank fires and seismic tank incidents worldwide are extremely rare, our prevention and emergency management programs are an integral part of keeping our terminals operating safely,” a spokesperson wrote in 2019.

But that doesn’t mean changes aren’t happening to the existing tanks.

Currently, work has begun to remove one existing storage tank on the property.

Work has also begun on the installation of 14 new storage tanks.

“An enhanced storm water treatment system will be installed and four non-fish-bearing watercourses will be relocated within the terminal,” reads a Trans Mountain statement. “Additionally, tunnel portal construction for the Burnaby Mountain Tunnel will take place within Burnaby Terminal. Relocation activities, approved by the Canada Energy Regulator independently of the Expansion Project, are also ongoing.”

As for the Westridge Marine Terminal in Burnaby, “construction activity includes pile driving and other in-water construction to construct three new shipping berths and a foreshore extension for new infrastructure and buildings, construction of new in-water rock habitat areas for fish, and a new utility dock including a new float and steel gangway for support vessels.” 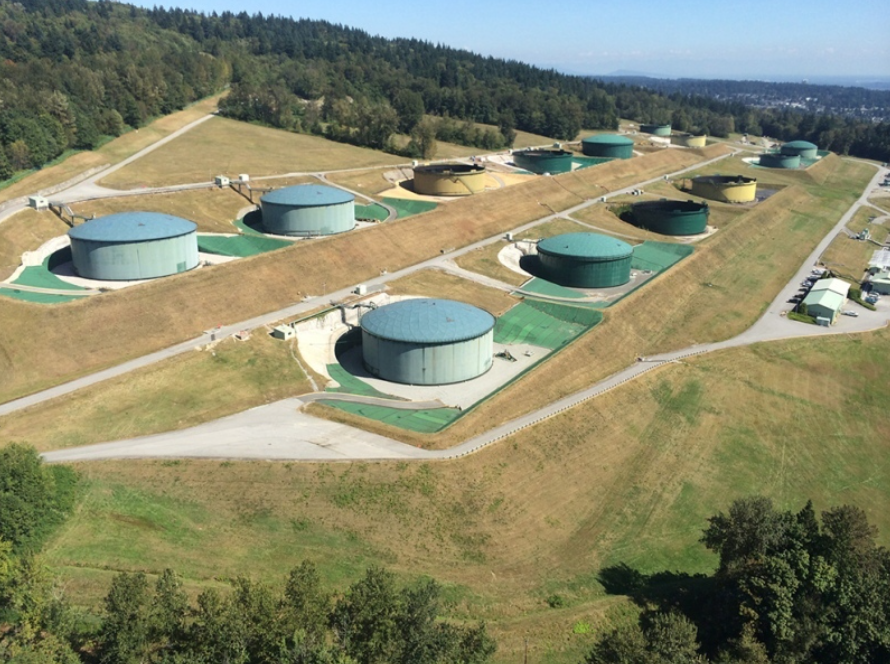