"We’ve been saying over and over again all year, this company is delayed,” McCartney said, which is a financial risk to Canadians since taxpayers are ultimately backstopping what is now a Crown corporation."

Environmentalists bet shifts in construction will delay the December 2022, completion of the Trans Mountain pipeline expansion, company argues there is give in the timeline.

Author of the article:
Derrick Penner

The now $12.6 billion Trans Mountain pipeline expansion project entered the fall with 5,600 workers busy at hundreds of sites along its 1,100-kilometre route.

Contractors are making “considerable progress” on expanding its Westridge marine terminal on Burrard Inlet and its preparations for tunnel boring beneath Burnaby Mountain at one end and are nearly finished pipeline construction at the other end in Edmonton.

And in its latest financial filings, Trans Mountain Corp. reported that it “remains on track” to be in service by late 2022, though environmental groups are questioning that schedule.

Peter McCartney, a campaign organizer for the Wilderness Committee is among those keeping an eye on statements Trans Mountain has made in its filings to the Canada Energy Regulator, compared with its construction schedule.

Groups have observed that clearing work did not start in a few key spots of a segment of the project known as Spread 7, the final 35-kilometre section between Langley and its Burnaby Mountain Terminal during a key time window that is least risk to fish in stream habitat areas.

That period is Aug. 1 to Sept. 15, and in an affidavit to its application for an expedited approval of its routing, company vice-president David Safaris said that if “substantial construction progress” isn’t made in 2020, it could lead to a “material risk” that its service date would be delayed by months to even a year.

And environmental groups are betting that eventuality is what is unfolding.

“We’ve been saying over and over again all year, this company is delayed,” McCartney said, which is a financial risk to Canadians since taxpayers are ultimately backstopping what is now a Crown corporation.

“With a project of this scope and size, spanning two provinces with hundreds of work sites, we have the flexibility within the schedule to make adjustments in specific areas while keeping to the broader timeline,” Hounsel said in a statement written in response to Postmedia questions.

She said planning and scheduling for each of the project’s segments is subject to change because of factors including regulatory changes or permitting and is updated with the Canada Energy Regulator every month.

However, she said they “remain on track for our expected in-service date of December, 2022.

The project, however, is under no less pressure from its critics, including the group of 100 academics and economists who signed a letter, addressed to federal Finance Minister Chrystia Freeland, who argued that the 590,00-barrels-per-day pipeline expansion makes less and less sense.

The group, including former B.C. Premier Mike Harcourt and top civil servant Tom Gunton, pointed to development such as Teck Resources’ decision to shelve its $20 billion Frontier oilsands mine and French oil firm Total’s $9.3 billion write down of its oilsands assets as evidence of the global shift.

Based on that, Gunton said investing $12.6 billion into building the project when private-sector firms are cutting theirs “does not make a lot of sense.”

Hounsel, however, said that the existing Trans Mountain pipeline has been operating at capacity every month in 2020, despite a dent in global oil demand sparked by the global COVID-19 pandemic, “demonstrating the demand for the pipeline.”

And while the group of academics and economists called for government to complete a new cost-benefit analysis of the project that accounts for recent market changes, Hounsel said the 13 major customers that signed up to use the expansion remain committed.

“(They) have made significant 15 and 20-year commitments for 80 per cent of the capacity on the expanded pipeline,” she said. 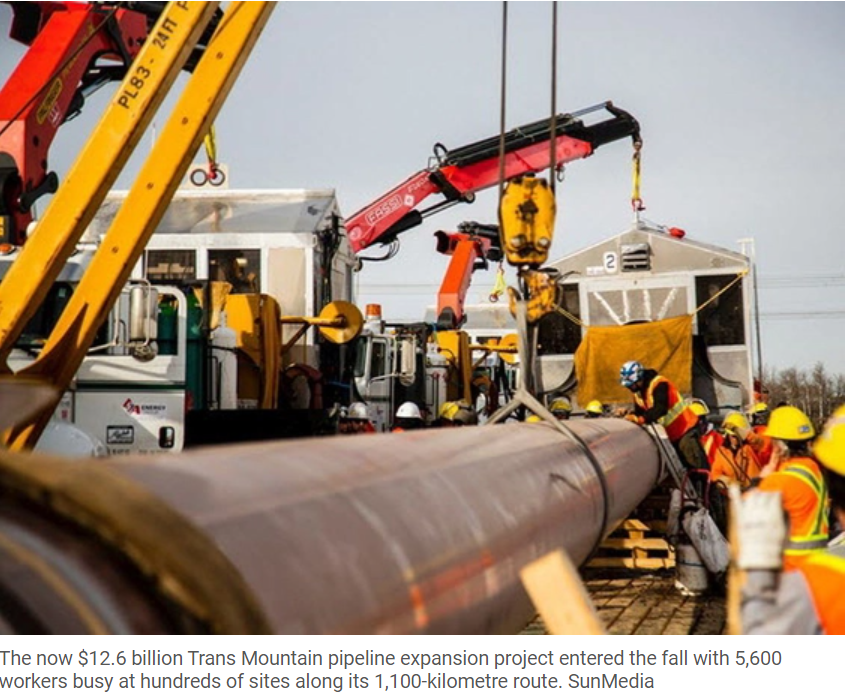