TMX and the Constitutional Mutiny

Once upon a time, it took just 20 months to get a pipeline built in Canada

“When one province tells a landlocked province that it can’t have tidewater access, the country becomes dysfunctional. It’d be like Alberta setting up toll booths on the CP Rail mainline to interfere with car parts from Asia going to Ontario.”

David Yager has been a founder, senior executive and director of various oilfield service companies. He continues to work with the industry through his consulting firm, Yager Management, and publishes a monthly column at Energy Now. He has also released his first book, Miracle to Menace – Alberta, A Carbon Story, about the clash over Alberta’s oil and gas industries, carbon taxes, climate change, and pipelines.

Recently, Yager joined us to answer a few questions about the messy pipeline situation in Canada.

Q: Going back about a year, what were your thoughts surrounding Ottawa’s purchase of the Trans Mountain pipeline?

Yager: In recent years, pipeline approvals have started to take up to a decade. The original interprovincial pipeline from Edmonton to Superior, Wisconsin, was conceived in 1949. It took 20 months from conception to flowing oil, and that included the cooperation of seven governments: those of Alberta, Saskatchewan, Manitoba, Minnesota, Wisconsin, Canada and the United States. The original Trans Mountain pipeline was conceived [in 1951], built, and had oil flowing in 18 months.

When the federal government approved [TMX] in 2016, that seemed encouraging. But then the new B.C. government came along a year later and said they were going to do anything possible to block the project. What you’re seeing is almost a mutiny — a constitutional mutiny by the provinces. It looked to me like the federal government realized that if they’re going to maintain credibility for the pipeline application approval process, having gone through all the hoops — and if Kinder Morgan was going to walk because of obstruction by British Columbia — I guess Ottawa’s conclusion was that they had to buy [the pipeline]. Plus they have the advantage of using other people’s money.

That’s the framework under which it was done. A federal-provincial jurisdiction battle was on Ottawa’s hands, and one way to deal with it was to own the pipeline.

Q: Now that the Trans Mountain expansion has been approved by Ottawa, again, what are your thoughts about the current state of affairs?

Yager: I’ve been asked this question many times over the years. When there are excavators digging ditch, when they’re lowering pipe in, welding it together, and buying it, then I will be comfortable saying the project is going ahead. Look at the Northern Gateway pipeline, which was approved by the regulators and the federal government in 2014. The prime minister had pledged in 2015 that if elected he could cancel it, and he did so in 2016. So who knows what to believe anymore?

Q: What do you think is the biggest way Ottawa has bungled this whole pipeline issue over the years?

Yager: Politicians love regulators. When you’re running for public office and you say, “It’s for the common good that we bulldoze your house for this expressway or put these power lines over your land,” it’s not popular. So regulators are great because then you turn the decision over to people whose names aren’t on a ballot. In the past, [the regulators] were regarded as credible, and when they made a decision people would say they had their chance to say how awful they thought this project was and they got on with their lives. But now people are saying they don’t care what the process is. Increasingly when the outcome is not in their favor they go to court.

Now the courts have to make these decisions. One of the issues is “duty to consult” [with Aboriginal peoples]. The duty to consult is not defined. At the Federal Court of Appeal with Trans Mountain and Northern Gateway, you put it in front of judges, and judges have to interpret what transpired in the consultation process.

The idea with Bill C-69 was to create the perfect piece of legislation that allows greater input into the process. The argument is that a project that goes through the Bill C-69 process will get fewer lawsuits. But you’ll never have to deal with it because you’ll never get through the process or the process is so convoluted that no one will ever apply. Industry’s complaint was that they took a regulatory process that was already vague — and becoming increasingly vague for political reasons — and, without clearing up the vagueness, they’ve introduced more.

We actually have to go the other way. You really need to look at the process and put in some simpler legislation, not like C-69, with a definition of duty to consult. People have asked for that, but that takes quite a bit of courage to craft the kind of legislation that would make those things easier to interpret.

When one province tells a landlocked province that it can’t have tidewater access, the country becomes dysfunctional. It’d be like Alberta setting up toll booths on the CP Rail mainline to interfere with car parts from Asia going to Ontario. This is a serious issue that the current Liberal government seems to be downplaying. They appear to be completely deaf. World oil production is going up. World oil demand is going up. The only major oil-producing country in the world that is restricting tidewater access for surplus oil production is Canada. You could shut down the oilsands tomorrow and it wouldn’t mean anything on the scale of global emissions.

Q: An interesting development we’ve seen is that more Indigenous groups are speaking out in favour of oil and gas development and pipeline construction. Do you think that’s having an effect on the dialogue, or is it falling on deaf ears?

Yager: The opponents of development, the anti-carbon crowd, have said for years that these projects trample on Indigenous rights. Yet historically, there has been lots of positive Indigenous participation in oil and gas production in Western Canada. I know this first-hand. But [previously] when it came to the issue of Indigenous rights, everyone was treated as one group rather than individually.

It seems that, for the first time, you’re seeing a split in the viewpoints of Indigenous Canadians in ongoing oil and gas development. This is a positive breakthrough because pretty well all the anti-carbon NGOs wrap themselves in the cloak of protecting Indigenous rights. It’s harder to do that now. It’s harder to say you speak for Indigenous rights when some Indigenous people are taking Ottawa to court over Bill C-48, which shuts down the Spirit Eagle pipeline.

The non-Indigenous people of Canada have never agreed about everything — it turns out the Indigenous people of Canada don’t, either. And industry is more than willing to work with them. It always has been. If you go back to the Federal Court of Appeals decisions on Northern Gateway and Trans Mountain, it was the consultation done by the federal government that was lacking, not industry.

Overall I think it’s a very positive development in every respect. 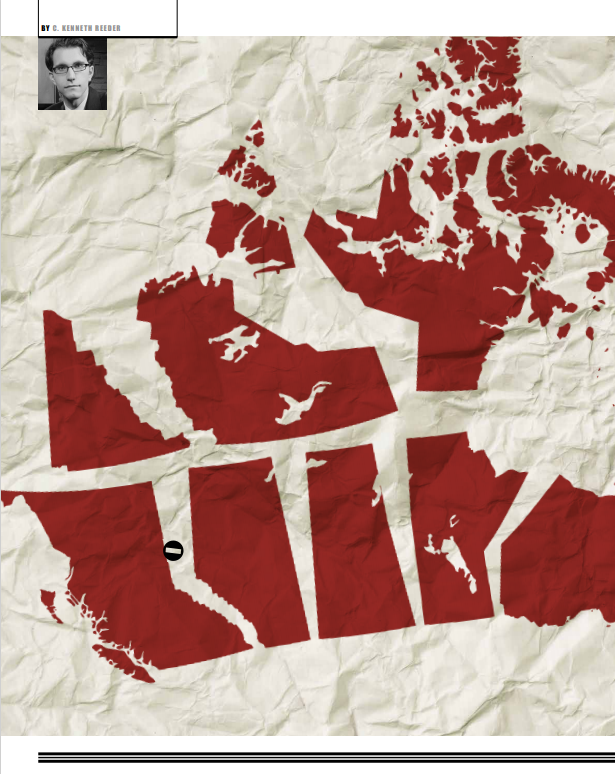 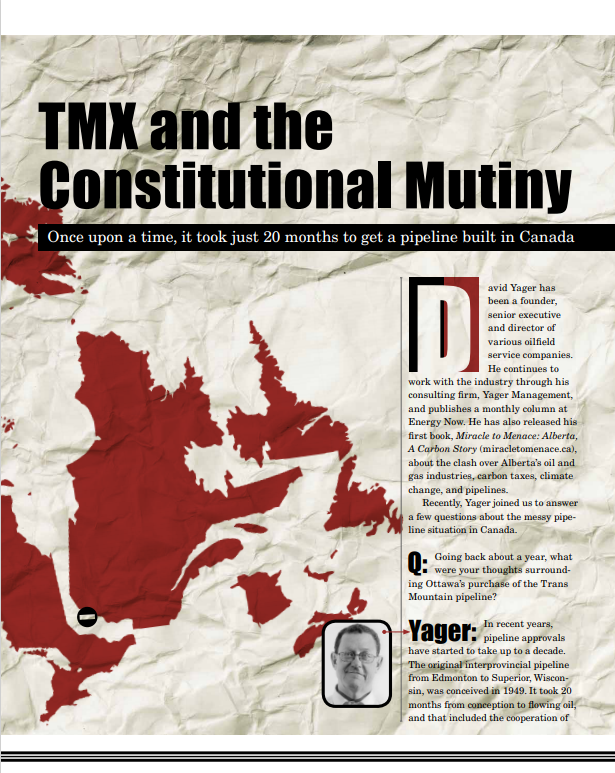 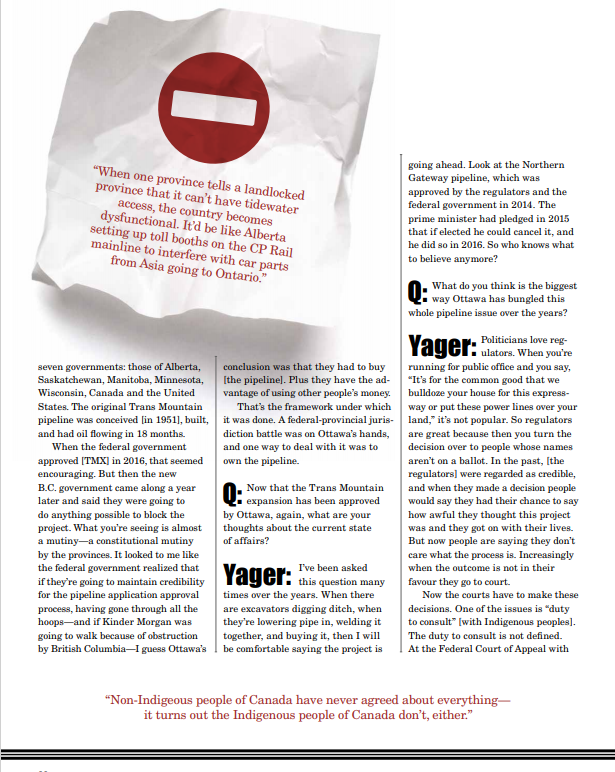 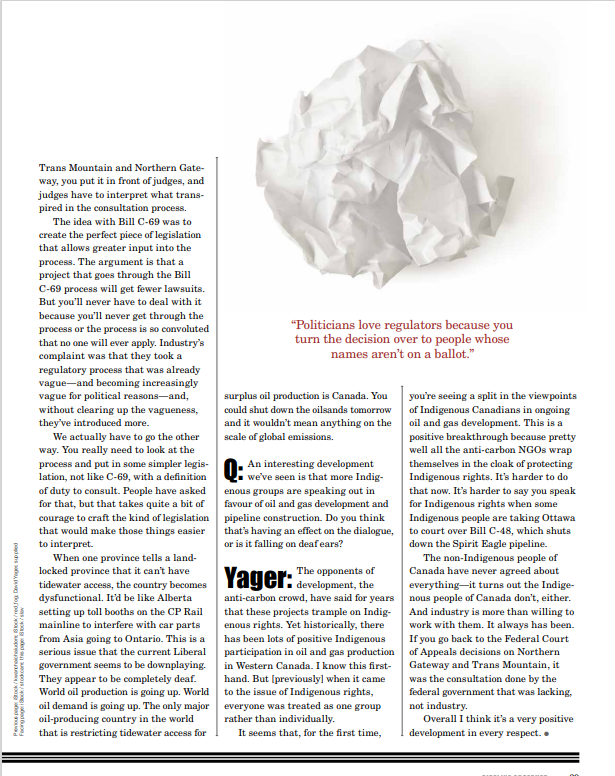 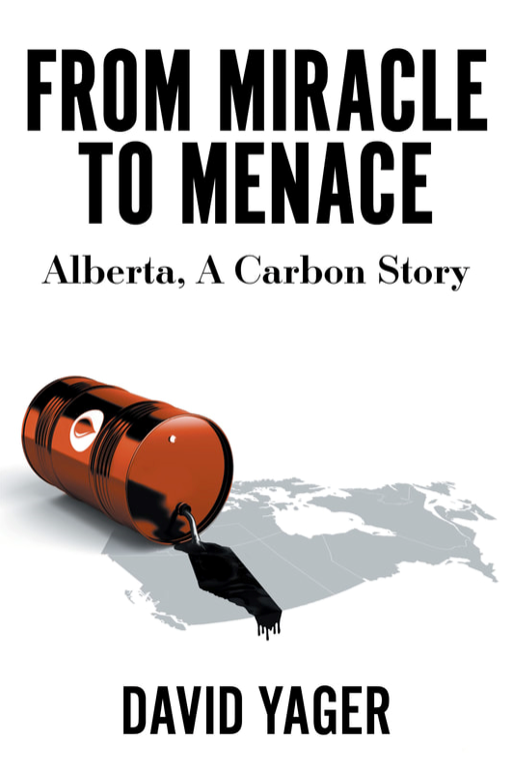 Kenneth Reeder is a Calgary financial analyst who provides mergers and acquisitions advisory services for mid-sized, privately held companies in Western Canada. He works with many clients in the oilfield services sector. He is also the editor of canadianmarketreview.com.