One of the most abused terms in pipeline politics today.

Friedrich Hayek
There is little doubt that Hayek would diagnose “social licence” to be one of the worst “weasel words” of our time given the consequences this sly expression is having on clear thinking, the rule of law and ordinary relationships between members of political and economic communities.

In 1988, economist Friedrich Hayek argued that the adjective “social” has “probably become the most confusing expression in our entire moral and political vocabulary.” He even provided a list he compiled of more than 160 nouns qualified by the adjective “social.” “Social licence” was not on this list.

Yet, there is little doubt that Hayek would diagnose “social licence” to be one of the worst “weasel words” of our time given the consequences this sly expression is having on clear thinking, the rule of law and ordinary relationships between members of political and economic communities.

Like “social justice,” who could possibly be opposed to such a nice-sounding phrase as “social licence”? The answer: Anyone who cares about words actually meaning something.

In brief, the problem with “social licence” is that it is unlimited and thus incapable of definition. The intentional ambiguity of the term means that there is no way to determine when “social licence” has been achieved. Without limits, there can be no serious goals. The linguistic silly putty of the term is perfect, however, for the environmental movement and other revolutionaries.

Of revolutionary movements, political scientist Eric Voegelin says, "A movement lives in that it moves. The radical revolutionary must make the revolution into a permanent condition; there can be no compromise or stabilization of the achievements at a definite point." A movement thrives on unrest, which is why we almost never hear environmentalists themselves proposing concrete goals. Instead, environmentalists prefer to rally for utopian ideas such as “No Pipelines” or “Stop Climate Change.”

As MLAs Prasad Panda and Leela Sharon Aheer pointed out recently in the Calgary Herald, “Barely under a year since endorsing Premier Rachel Notley’s plan for a $3-billion carbon tax and cap on oil sands emissions, Forest Ethics, now known as Stand, has remained fiercely against any new pipelines. Stand is now going as far as demanding the NEB be blown up entirely (not a terrible idea, despite their motives. —editors) and to hit the reset button on every new pipeline proposal. It’s becoming obvious the path to building new pipeline projects does not begin with a naive attempt to buy social licence from some of the most extremist fringes of anti-pipeline activists across the country.”

“Like “social justice,” who could possibly be opposed to such a nice-sounding phrase as “social licence”? The answer: Anyone who cares about words actually meaning something.”

In July 2015, Prime Minister Justin Trudeau said in Fredericton, “We need to get our resources to market and more oil by rail is a bad idea. We need to do it in a responsible way, and that means pipelines. But those pipelines have to achieve the public trust and the social licence that is necessary.”

But what is the threshold of “public trust” and “social licence”? What does it even mean?

And then there is the whole problem of whether “social licence” is gained, earned, won, bought. Who knows?

When the Canadian Association of Petroleum Producers (CAPP) made a million-dollar contribution to the Museum of Civilization in 2013, Andrea Harden-Donahue, energy and climate campaigner with the Council of Canadians, complained, “Tar sands producers are desperately seeking the social licence that partnerships with prestigious cultural institutions can bring.” Another activist expressed concern that CAPP was “using this sponsorship to whitewash their dirty tar sands projects.”

Is it really “society” that grants “licence” anyway? Or, is permission for pipeline projects, for example, granted by legitimate regulatory authorities within a democracy, subject to the forces of supply and demand within a free market economy, grounded in certain principles like private property and the rule of law? Those are the principles of Canadian society, and they have boundaries and mechanisms with limits, checks and balances. We ought not let vacuous weasel words replace them.

Amanda Achtman is a CAEPLA contributor. She holds a BA in political science and is currently pursuing an MA in philosophy. She has worked at the Frontier Centre for Public Policy and participated in seminars on economics hosted by numerous institutes, including the Acton Institute, Mises Institute and the Foundation for Economic Education. 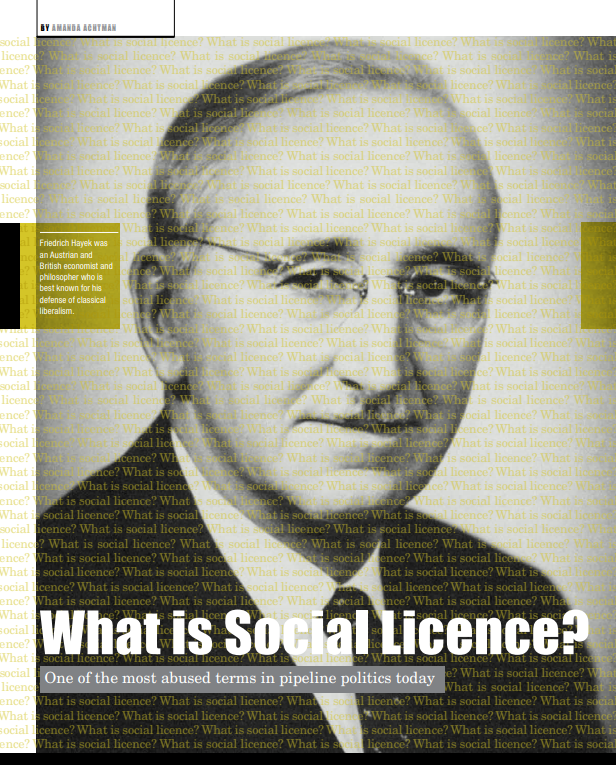 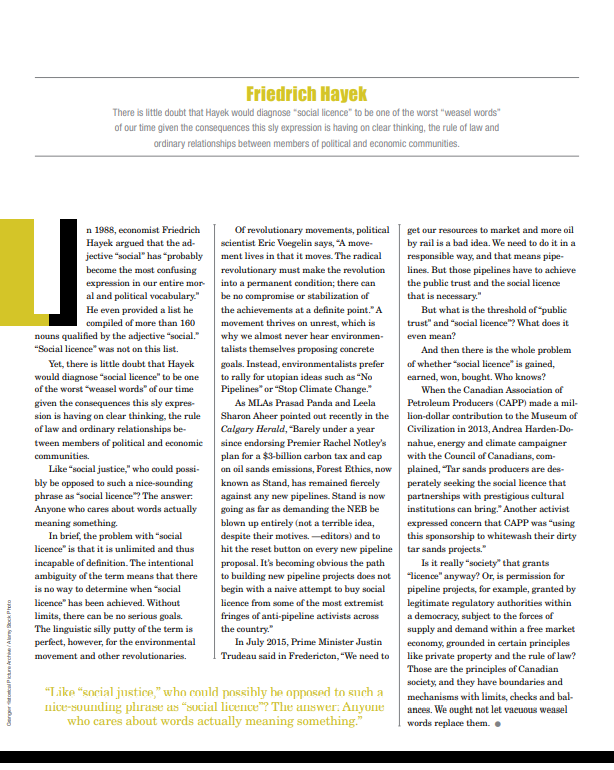