The Value of CAEPLA Construction Monitors

They’ve proven indispensable for pipeline construction — shouldn’t they be a given on more sensitive work?

“In contrast, integrity digs are conducted during all seasons and conditions with no provision for cleaning stations, placing greater stress on soils and opening lands to greater threat of erosion and contamination.”

Every time land is opened — for any purpose, and no matter how carefully — some topsoil/subsoil is lost and the deeper soil structure is altered in a way that takes years to restore. Soil preservation is a major reason farmers — especially in Western Canada — have been turning steadily to no-till practices.

So, while many landowners support pipelines in the interest of public benefit — a clean, safe, economical method of delivering necessary energy — they do so at some risk to their own interests. Land is cut open and put at risk in order to install pipelines.

CAEPLA exists to protect land and landowner interests, so good-hearted, hard-working people can continue to cooperate in the interests of economic development.

For some years now, CAEPLA has advocated that the watchful eyes of independent third-party monitors are key to protecting landowner interests during pipeline construction. These trained observers verify that, from the moment the first surveyor’s boots touch the soil till the last shovelful of soil is replaced and re-vegetated, operators follow practices that safeguard the land and landowners.

If construction monitors have proven vital during major pipeline construction, what about integrity digs? These digs generally attract no public attention, no environmental activism and no Indigenous community protests. Yet, every year, thousands of acres are re-opened to risks which may be even greater than during initial construction.

What are integrity digs?

Your area pipeline operator considers the integrity dig a maintenance activity essential to safe operation. Periodically, the ground is opened to expose “live” pipelines to human scrutiny. Locations are chosen where in-line instruments (smart pigs) indicate there may be some developing corrosion or cracking, which if not repaired could lead to an environmental spill or explosion.

What responsible landowner wouldn’t sacrifice a measure of self-interest for the general safety and well-being of the public and our shared environment? Yet, should we continue to permit this activity without safeguards that apply to initial construction?

Major pipeline projects can afford, and have access to, a number of specified pieces of equipment which perform a particular function better than any other.

Integrity digs are usually performed by an excavator or backhoe, the Swiss Army knife of construction. It can perform most tasks well enough, but may not be the ideal tool for some. Further, the successful handling of soils on any integrity dig is almost completely dependent on the skill of the hoe operator.

“Temporary Access” to an integrity dig site usually involves making a new traffic path across your land. This increases the amount of land that is disturbed (risking rutting and soil compaction) and susceptible to imported pathogens (e.g. on the wheels of as many as a dozen welding trucks per day).

What’s the bottom line? If independent monitors are crucial to protecting land and landowner interests during initial pipeline construction, they are even more vital to oversee the more complex, unpredictable and under-resourced activity of integrity digs.

Dr. Dave Baspaly is an experienced corporate leader and a certified management consultant with a remarkable ability to help people increase performance and achieve strategic goals. 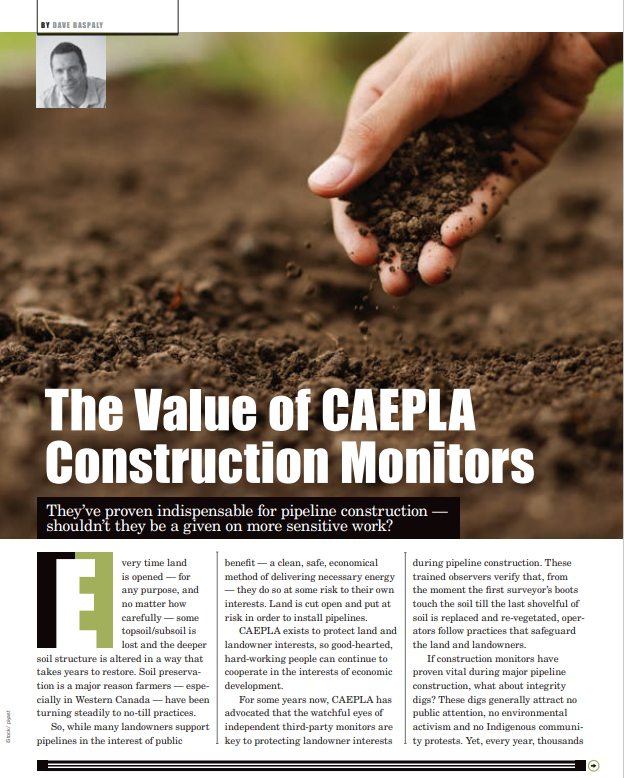 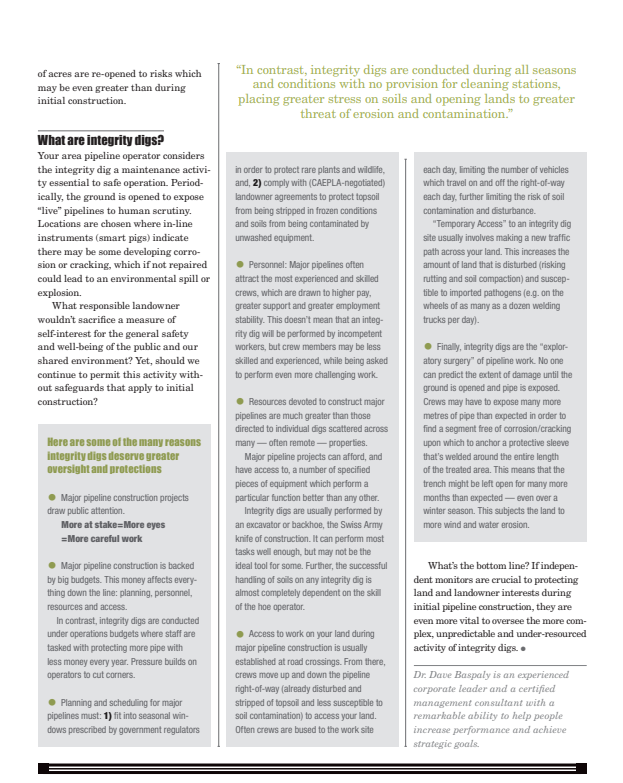