What makes something actually fair?

As with many things, it depends whom you ask.

You’ve likely dealt with the idea of fair market value before. Maybe it was regarding an appraisal for a house, a piece of equipment or livestock inventory.

What about when a pipeline company approaches a landowner to negotiate an easement? A lot of discussion about compensation will revolve around the fair market value of the property.

If a pipeline company and a landowner cannot come to an agreement regarding compensation, the National Energy Board will arbitrate the conflict. The end result is inevitably the expropriation of the land, with the owner required to accept compensation based on “fair market value.”

Section 97 (1a) of the National Energy Board Act says if a matter goes to arbitration, the NEB’s arbitration committee will determine the level of compensation based on “the market value of lands taken by the company.”

Section 97 (2a) defines “market value” as “the amount that would have been paid for the lands if, at the time of their taking, they had been sold in the market by a willing seller to a willing buyer.”

There are two main problems with this system:

First, the negotiation dynamic is clearly different when a federal regulator casts its shadow over the process. Pipeline companies know that if negotiations break down, then the NEB’s arbitration will generally produce their desired result anyway.

This would tend to encourage landowners to grant the easement to avoid an arbitration process with a foregone conclusion.

The second issue is at a more fundamental level. “Market value” is not an appropriate tool when determining compensation for the expropriation of someone’s land.

Referring to some idea of market value is fine if it lines up with a price a landowner is happy to accept. If not, then it’s nothing more than a stick to beat the landowner with.

Here is the critical point: “fair market value” is based on an assessment value. This is determined by looking at comparable transactions.

But since an actual sale has not taken place for the property in question, the assessment is ultimately arbitrary and subject to favouritism and collusion.

Just because some similar properties in your area sold for a million dollars doesn’t mean it’s fair for you to accept the same for yours. After all, what if you’d rather have the land as it is instead of that million?

Obviously in the case of arbitration, there hasn’t been both a willing buyer and seller. There has been no exchange that gives us a price paid as a historical fact.

What makes something actually fair? As with many things, it depends whom you ask.

How can you settle that? You can only look at outcomes. If the buyer and the seller make a deal and complete an exchange, they must have thought it was fair. If no exchange happens and they walk away, obviously they couldn’t agree about what was fair.

We can joke about how “a good compromise makes everyone mad,” but really, nothing is fairer than a voluntary exchange (an insight given by some of the earliest economists over 500 years ago).

Compare this with the situation where a company wants to do federally regulated pipeline work on your property and talk compensation. Unfortunately, even when rooted in some notion of fair market value, that isn’t always a fair process. 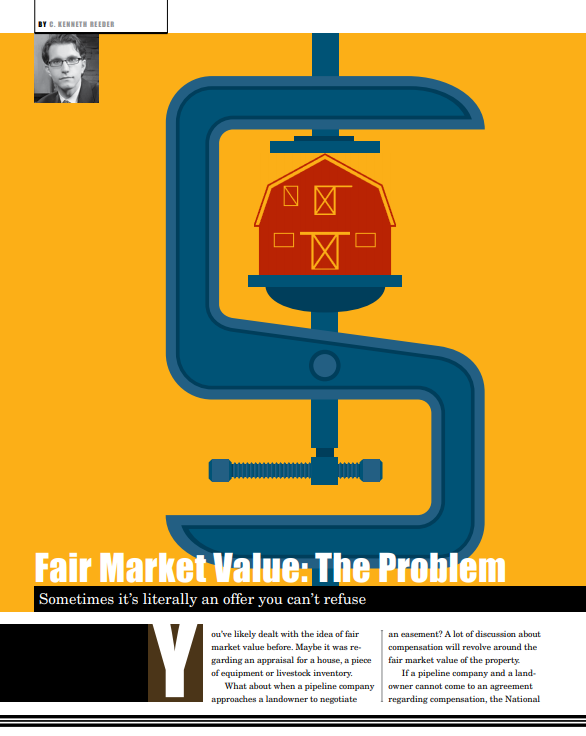 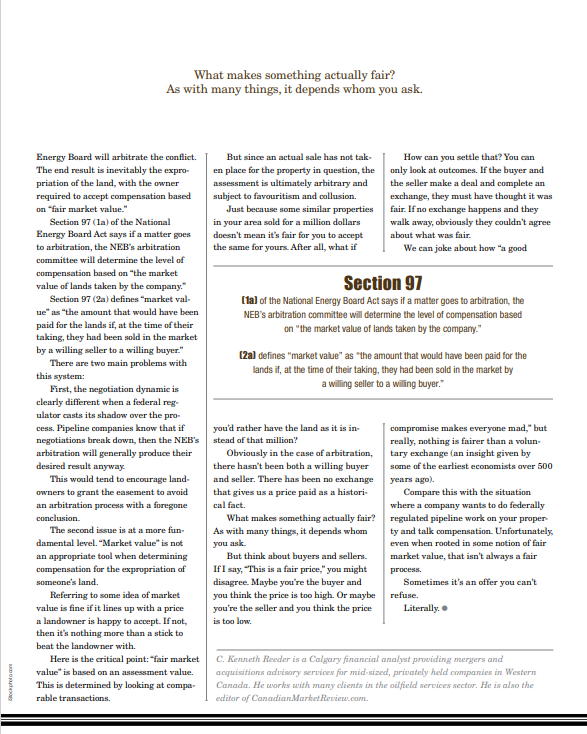