Signing could mean you’re all out of options

“By signing the option, you have effectively signed the agreement and accepted the project.”

If you’re familiar with professional team sports, you may have heard the terms “team option,” “player option” and “mutual option.”

With a mutual option, both the team and the player must exercise the option in order to extend the stay of the player under the existing contract.

Option agreements are common in pro sports. They’re also common when it comes to land deals and they work in much the same way. Think of the land as a team and the landowner as the team ownership. The player in this scenario is the person or company looking to use the land, whether by way of leasing or purchasing it.

What is vitally important to remember is that the option agreements proposed to landowners are “player options,” not “team options.” If you, as the landowner, think you can sign the option and then decide later on down the road whether you want to go through with a project on your land, think again. It’s the project proponent who has the “option” to follow through with the project. As soon as you sign, you are locked into the agreement that has been proposed (a lease, an easement, etc.), subject only to the project proponent exercising its option. By signing the option, you have effectively signed the agreement and accepted the project.

And what does the landowner get in return for granting the option? Sometimes there is a (relatively small) monetary payment. That’s nice. But the project proponent usually gets not only the right to enter into the lease, easement or other agreement at its option down the road, it often also obtains a right of entry to your property even before it exercises its option. The project proponent may be getting rights to explore, carry out testing or conduct other investigations and activities on your property. Is the payment still worth it?

Should landowners sign option agreements? Not without getting good legal advice on the nature of the option and the eventual agreement to be made. And not without knowing exactly what project is being proposed for your property.

All too often, landowners think they are getting a certain type of project and end up with something different. A land agent tells the landowner that the leased area will be in X location, but the project is eventually constructed in Y location.

Project proponents want to keep their options open (no pun intended), so they will include clauses that state that the specifications of the project facilities on your land will be determined by the company (at its sole discretion) later. Classic bait and switch.

Maybe if the upfront option payment is large enough to warrant tying up your property with a project that may not ever come to fruition — some options stay open for years. And only if you have the firm written agreement of the project proponent as to what the project is going to entail.

Do your homework — your due diligence. If a company approaches you with an option agreement, ask questions and insist on having a full understanding of the project and how it will affect your property. Insist on getting a legal opinion on both the option agreement and the project agreement (lease, easement, etc.). If the company won’t agree to pay for an independent legal review, or won’t agree to pay for the review unless you sign, this may be an indication that you’re best to pass on the project.

Unsurprisingly, the new company claims never to have heard of the various promises made to you by the land agent. It’s not fair to say that no option agreement can be a fair option for the landowner, but landowners need to be very careful in dealing with options. Approach them with extreme caution and a healthy dose of skepticism.

John Goudy is a litigator whose practice is focused in the areas of commercial and environmental litigation, expropriation law, energy regulation, and regulatory offences. He is particularly interested in agricultural issues and the regulation of agricultural land use. He lives and works on his family’s cash crop farm north of London, Ontario, with his wife and three kids. 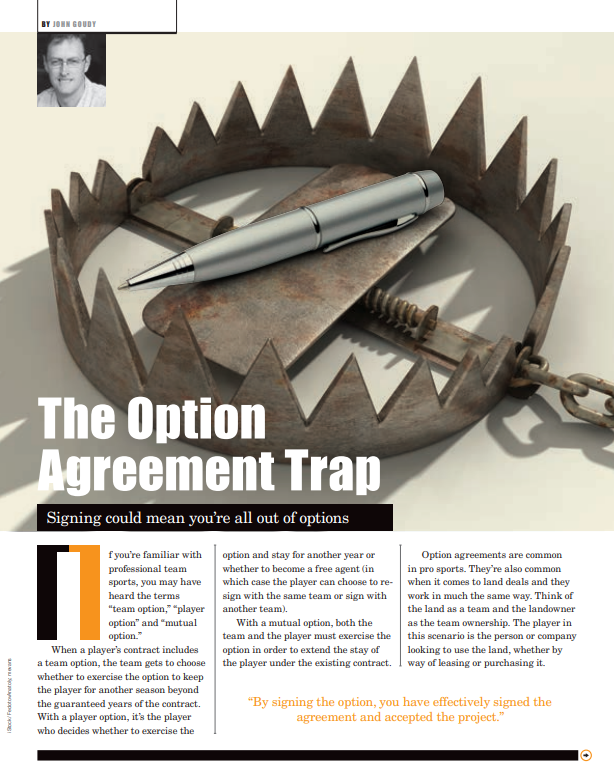 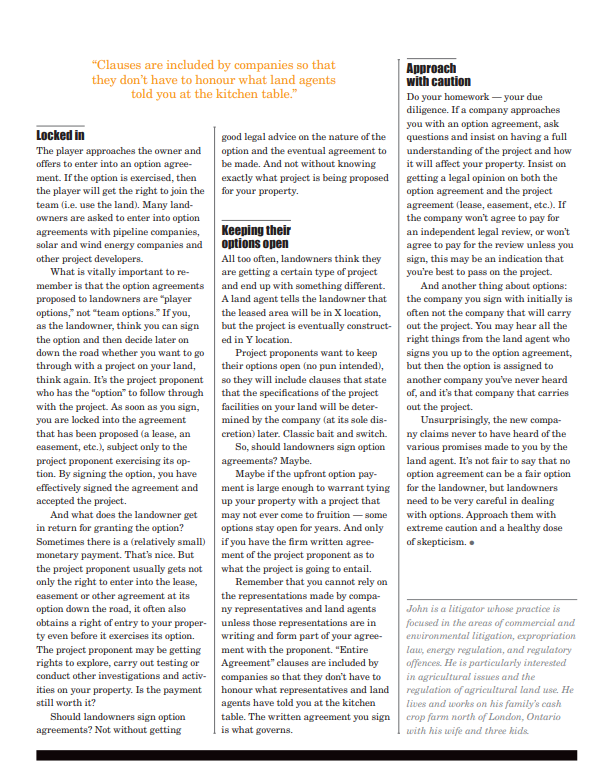