What happens to your land after the final weld on Enbridge’s state-of-the-art replacement pipe?

“Our promise is to restore the pipeline right-of-way to as good or better condition than it was before construction.”

With construction of the Line 3 replacement pipeline essentially complete in Canada, the process of reclamation—returning the land to its former use and productive capability—has begun in parts of Saskatchewan and southern Manitoba.

Banister Pipelines is overseeing the work on behalf of Enbridge over approximately 280 kilometres from Regina, through the Vibank area, to Cromer, while SA Energy is overseeing the work over approximately 189 kilometres from the Souris River to Gretna. Crews of around 400 began mobilizing in mid-June; weather permitting, the expectation is the work will be completed sometime in the fall.

“Our promise is to restore the pipeline right-of-way to as good or better condition than it was before construction, and to minimize the long-term impact to the land along our pipelines,” says Allen Sawatzky, manager of construction for the Line 3 Replacement Project. “Before construction takes place, we obtain regulatory approval and the environmental permits, which prescribe specific reclamation measures and techniques proven to be successful in past projects.”

Most reclamation occurs within the first year following construction. However, it can take longer, depending on weather and other environmental conditions. The first phase involves a more visible presence of workers. As the work winds down, crew sizes diminish as well.

A critical component of right-of-way reclamation involves working with landowners, from the outset of a project, to reach agreement on property-specific items that will be addressed during and after construction.

“This could include things like repairing fences, driveways or landscaping, seeding hay land and native prairie areas, long-term erosion control measures in environmentally sensitive areas, and special care to be taken when working around livestock,” Sawatzky explains.

During excavation for the Line 3 replacement pipeline, topsoil was separated from the subsoil to ensure the land remains productive for agricultural purposes after construction. The land is re-contoured to maintain drainage patterns, hay land and native prairie areas are reseeded, cultivated land is prepared for planting, and wetlands and watercourses are stabilized and revegetated to prevent erosion and ensure habitat is restored for the many plants and wildlife along the line.

“Although most temporary workspaces will be allowed to grow back, we will generally maintain an approximately 12-metre-wide permanent right-of-way free of structures, trees and shrubs so that the pipeline is visible during aerial inspections and accessible in the case of an emergency,” Sawatzky says.

To prepare the right-of-way for final reclamation, crews have been out and about in all of the 2018 construction areas.

“We’ve got a full complement of staff out there doing general maintenance,” Sawatzky says. “Topping up gravel here and there, some erosion control, sign maintenance, gate repairs, hydroseeding — things like that,” he says. “We’re talking with landowners and staying on top of it.” 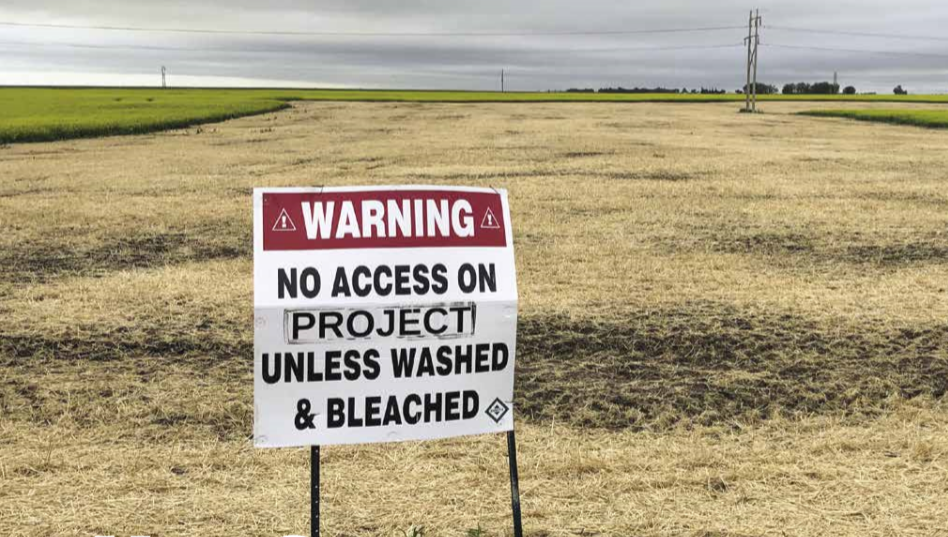