The Law of the Landowners

For more than three decades, Paul Vogel has worked for landowners forced into fights they never wanted and has seen many victories. But his efforts to bring ammunition to the underdogs in battles over land use began with one case close to home.

Back in the late 1980s, the Ontario-based litigator had ongoing conversations with a neighbour who was struggling with pipeline issues.

“He looked like he would have apoplexy when talking about the pipelines,” Vogel recalls.

Vogel told the frustrated farmer his first step to finding a solution lay in going to a regulatory hearing. And he was right.

“We did a hearing and we were successful,” says Vogel.

When he began his career, Vogel, who earned his law degree at Osgoode Hall Law School, pursued cases involving consumer advocacy, but the Winnipeg native quickly saw his scope widen.

“Typically, what farmers want to do is farm, to be out there on tractors and combines. They are very solitary people and don’t act collectively.”

In the 1980s, when interest rates skyrocketed and many farmers struggled, Vogel took on cases dealing with those beleaguered individuals and banks. Not long after, he found himself representing others with energy pipelines or hydro corridors going through their properties.

In the early days of pipelines being built, Vogel says companies “steamrolled” over farmers giving them “a few hundred dollars in compensation,” followed by degraded fertility of the soil and decreased crop production.

“They did terrible destruction on these farms and [landowners] were never fairly treated or compensated,” he says. “So, they had a lot of grievances and no power. They didn’t know anything about the regulatory system and were not particularly welcome when they showed up at hearings. They were just out in the cold.”

Seemingly alone, farmers were unable to defend their land. But Vogel suggested these landowners band together to advocate for their rights.

“We have changed the way pipelines are constructed. There is still a lot of damage, but a lot less, and it's capable of being remediated in a better way.”

“Typically, what farmers want to do is farm, to be out there on tractors and combines. They are very solitary people and don’t act collectively. It was a whole different prospect for them,” Vogel says.

With his neighbour’s case as a catalyst, Vogel went from handling cases in southern Ontario to representing clients from Nova Scotia to Quebec, as well as on Vancouver Island.

“Landowners got organized and did another hearing and were successful there and eventually successful in changing how pipelines are built in Canada,” Vogel says. “We could demonstrate when they organized and got together, we could do something.”

CAEPLA was formed in 2000 to advocate for landowners up against tough opponents, at times multi-national corporations.

“I’m very proud of what we’ve been able to accomplish working with CAEPLA,” he says.

Over some three decades, much has improved. Vogel has played a key role in many successes, but he also credits the commitment of his clients.

“The first groups that organized took on significant risk in order to advance the landowner causes and were successful and prompted [the] formation of CAEPLA,” he says. “I think they certainly feel more empowered today than they used to, but they would still rather not have pipelines.”

Despite representing hundreds of landowners, Vogel says he is always moved by the unfair situation thrust upon them by what are typically formidable adversaries.

“They [landowners] are like abuse victims—that’s what it always reminded me of,” he says. “Part of what was important and interesting to me is the situation of farmers who have had property—in many cases multigenerational farms—feeling invaded.”

Many consider themselves to be “stewards of the land and feel very deeply about protecting the land," says Vogel. “Just think about a high-pressure pipeline going through your backyard. You are concerned about your family: What if that thing blows up? Can I take my farm equipment across it? Is my backyard subject to restrictions now on how you use it? You feel an invasion of person and privacy.”

Vogel says the work has been exciting and interesting, both from an environmental and legal perspective, and he is honoured to have been able to stand up for what’s right.

“Certainly, with the initial groups, they felt abuse—society imposed this on them and they didn’t have much choice,” Vogel says. “It's just wrong and these people needed a voice.”

Vogel says better compensation for losses and destruction, now standard across North America, is largely because of these initial groups’ organized efforts.

“We have changed the way pipelines are constructed,” he says. “There is still a lot of damage, but a lot less, and it’s capable of being remediated in a better way. Landowners are better off today than they were 30 years ago. I think there is a greater recognition [of] landowners as stakeholders [who are] substantially affected.”

Vogel’s work has not focused exclusively on pipelines, but his work with CAEPLA has been both personally and professionally rewarding.

“It requires a considerable amount of patience and endurance and risk to confront the powers that be,” says Vogel. “It’s like David and Goliath.”

Vogel says he admires landowners and has learned much from them, even developing friendships with many across Canada. His passion has always underscored his work, as do his own guiding principles.

“I think if you treat people with honesty and integrity and do the best job you can for them, that’s a foundation for not only successful professional relationships, but a fulfilled life,” he says.

When 67-year-old Vogel is not working, the father of three (with four grandchildren and a “grand-dog”) spends much of his time out at Lake Huron canoeing and biking.

He and his wife, Joan, who have been married 46 years, met working for L’Arche Canada—an organization which is part of a global network helping people with intellectual disabilities live, work and make meaningful contributions to their communities.

Vogel, whose youngest daughter has Down’s syndrome, was on the founding board of the London L’Arche and sits on the national board.  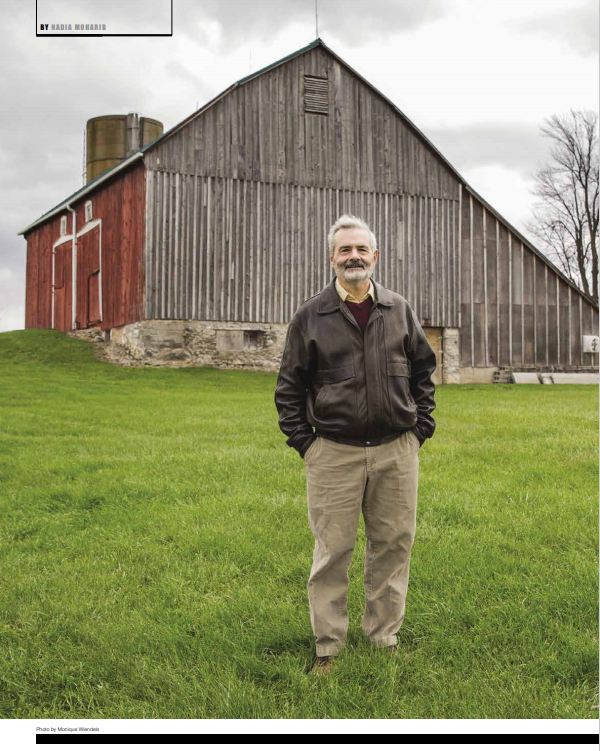 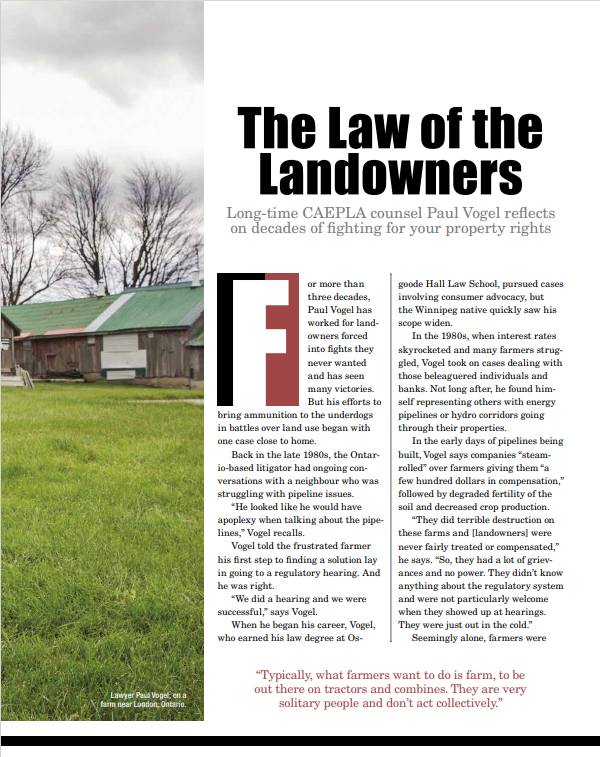 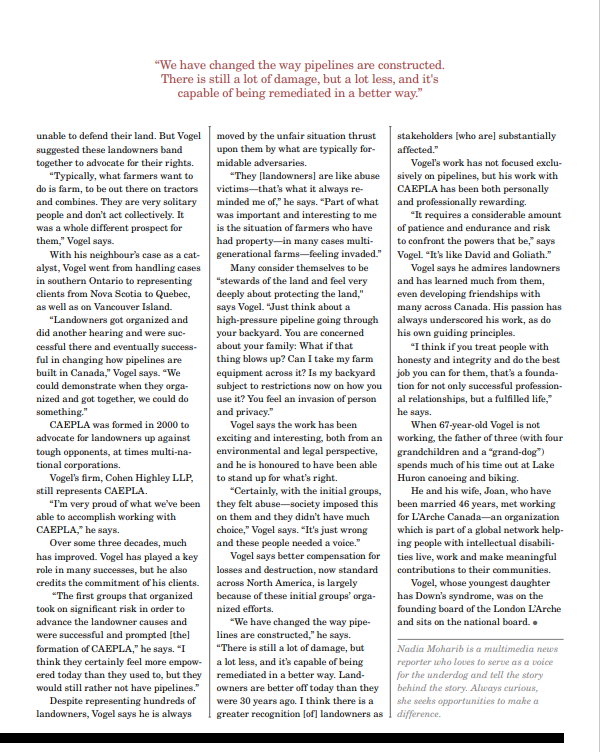