The Latest Threat from Manitoba Hydro

“Nobody in government has the gumption to stand up to Hydro and say ‘negotiate, not expropriate’.”

In January 2019, Manitoba Hydro got approval from the National Energy Board (NEB) to construct and operate a 500 kV power line—the Manitoba-Minnesota Transmission Project (MMTP)—from the Dorsey Converter Station to connect to a new Great Northern Transmission Line in Minnesota.

The $4.5 billion international power sale was considered a crucial element for the justification to build the provincial power monopoly’s BiPole lll, a boondoggle that ended up costing over $5 billion—more than twice the original estimate. Not only have project overruns resulted in jacked-up Hydro rates for users, Manitoba Hydro also used predatory expropriation tactics to bulldoze the property (and property rights) of over 100 landowners through prime agricultural land in the path to the border.

Jurgen Kohler, chair of the Manitoba BiPole lll Landowners Committee (MBLC), is a grain and oilseed farmer who foresees continued abuse of landowner property rights by Manitoba Hydro with MMTP while the Progressive Conservative government of Brian Pallister looks the other way.

“Our premier had to go to Ottawa to meet with Prime Minister Trudeau to get this approved by cabinet,” says Kohler. “The big question is how will landowners be treated, especially in light of the NEB decision having a couple of landowner friendly recommendations.”

“They have to organize quickly and form a partnership with CAEPLA.”

Kohler cautions that, based on landowners’ experience dealing with Hydro in the path of BiPole lll, “They have to get organized quickly, and form a partnership with the Canadian Association of Energy and Pipeline Landowner Associations (CAEPLA), who have experience fighting for your property rights.” He notes that lawyers in Manitoba “often have business dealings or standing contracts with Hydro” and are therefore compromised.

“If landowners don’t reach out to CAEPLA, they’ll be picked off,” Kohler says, explaining that Hydro just wears people down by constantly showing up at their door nagging them to sign. It can be intimidating.

"Get yourself prepared, because you don’t want to be dealing with Hydro individually. That’s their game, to offer incentives and gloss over the issues. ‘Sure it'll be taken care of,’ they’ll say, ‘Just sign the easement.’”

Kohler has first-hand experience with the liability that the power company shifts to farmers. A brush with an old wooden pole that Hydro had to replace was followed by a year of silence, despite Koehler asking for specs. Then his insurance company got a replacement bill—for $36,000. So much for signing easements.

“Those are huge structures, with huge power going through those lines. If something happens you can be sure the bill won’t be 36k, it'll be astronomical!” Kohler says. “The insurance company might cover it the first time but, on average, the premium for people near the hydro line is $1,000 a year higher. There’s so much risk Manitoba Hydro pushes onto the landowner that they aren’t aware of.”

The biggest problem Kohler and landowners have faced is the lack of respect for the concept of property rights and fair negotiations. This he blames on the Pallister government effectively giving Crown expropriators licence to kill property rights and abuse landowners. He cites the recent land-grab of seven acres in Carman, MB, for a dubious health-care campus project as another example.

“There’s something about Hydro that they control the government in a way that’s just not acceptable. It seems to me Hydro calls the shots. Nobody in the government has the gumption to stand up to Hydro and say, ‘Negotiate, not expropriate.’ In BiPole III, the corridor was 66 metres wide and you look and go, ‘Why?’ Because it was easy for them to take more [property than was needed]. They have that power in legislation and aren’t afraid to use it, just like in Carman.”

“Blaine threw us under the bus. He used us in the Legislature (in question period) to raise his profile. Pallister campaigned on how terrible we were treated by Hydro, but when they got into power, it was all for nothing. Pallister is supposedly all pro-small business—what are we? We should matter the most, especially to a premier like Pallister who comes from a rural background (Portage la Prairie). He just puts his head in the sand and lets Hydro do their thing."

And with a second mandate, Kohler doubts the Pallister government will become any more respectful of property rights.

Marty Gold is a Winnipeg-based writer and broadcaster. He is the editor of TheJ.ca. 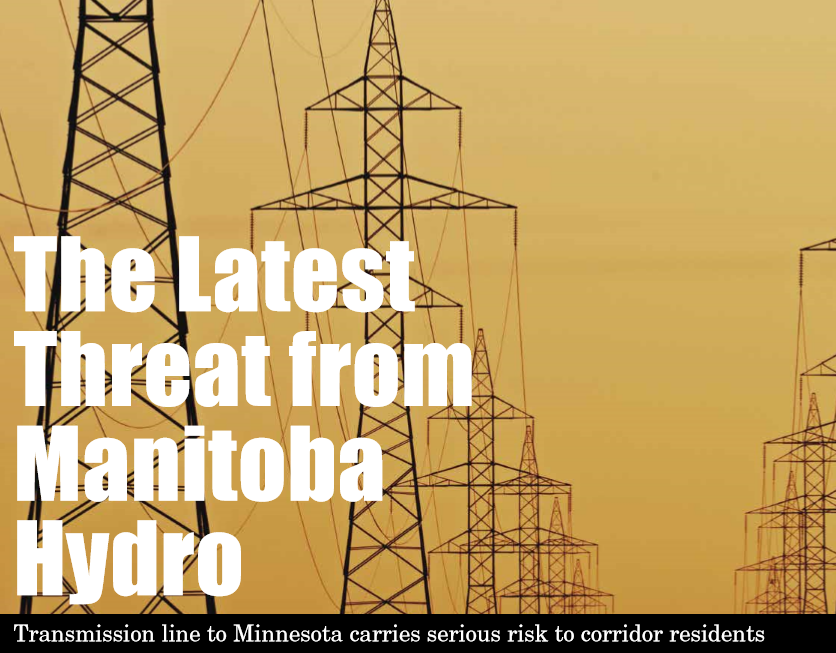