When Ottawa originally bought the pipeline, we heard about everything except the interests of property owners

When Ottawa nationalized the Trans Mountain pipeline (TMX), we knew it wasn’t the end of the debacle and there would be many more harebrained schemes connected with the asset.

The latest is the idea of giving the pipeline (or a share of it) to Indigenous people according to government sources speaking with the Toronto Sun (October 3, 2018).

We heard about Indigenous people buying equity positions in Ottawa’s Trans Mountain, but this new information suggests they might receive Trans Mountain as a gift.

And supposedly this isn’t just a frivolous idea. It has come up at the cabinet level and is under serious consideration.

Don’t you love when the government takes your money to buy things and gives them to other people? Such is the nature of government, but this is egregious.

While different parties talk about how to divvy up the loot, there is an important group being left out of the discussion.

What about the landowners?

There are 2,200 Trans Mountain pipeline landowners along the line. Are their easements then to be transformed into Indigenous fiefdoms?

No one with political influence nor anyone in the mainstream media seems to care about the landowners directly affected by all of this. When Ottawa originally bought the pipeline, we heard about everything except the interests of property owners.

One might say that they’re already taken care of. But the landowners find themselves in a situation where
Ottawa has assumed their agreements with Kinder Morgan.

Since it's their land, shouldn’t they have the option to get an equity position before Ottawa starts giving it away?

After all, the property owners pay taxes that have been used by Ottawa to make the acquisition in the first place. Indigenous peoples’ governing bodies are basically just strange arms of the federal government itself and they pay no tax.

Now, it’s one thing to want to sell the pipeline to a willing buyer (although finding such a buyer is difficult given that federal courts quashed the approval to develop the expansion). It’s quite different to use taxpayer money to buy a major energy infrastructure asset from a corporation and then divvy up the asset for political purposes.

Even if the government doesn't ignore the existing TMX landowners—CAEPLA is working to ensure it doesn’t—it is still an astoundingly bad idea.

Many of B.C.’s Indigenous people supported TMX. They made good-faith agreements so they could benefit from the project.

Meanwhile, some opposed it. Will the supporting Indigenous people be happy if those who fought to kill the pipeline get free a piece of the action?

Is it a good idea to send a message that engaging in legal extortion will be handsomely rewarded by Ottawa?  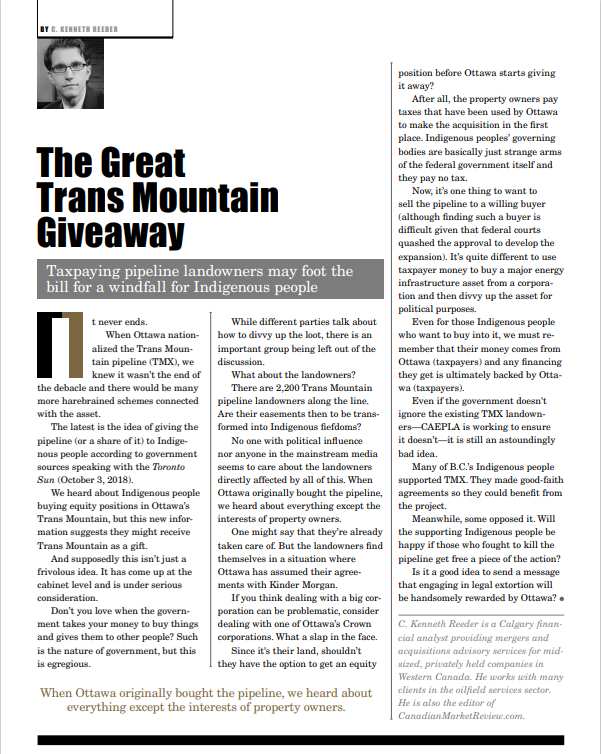 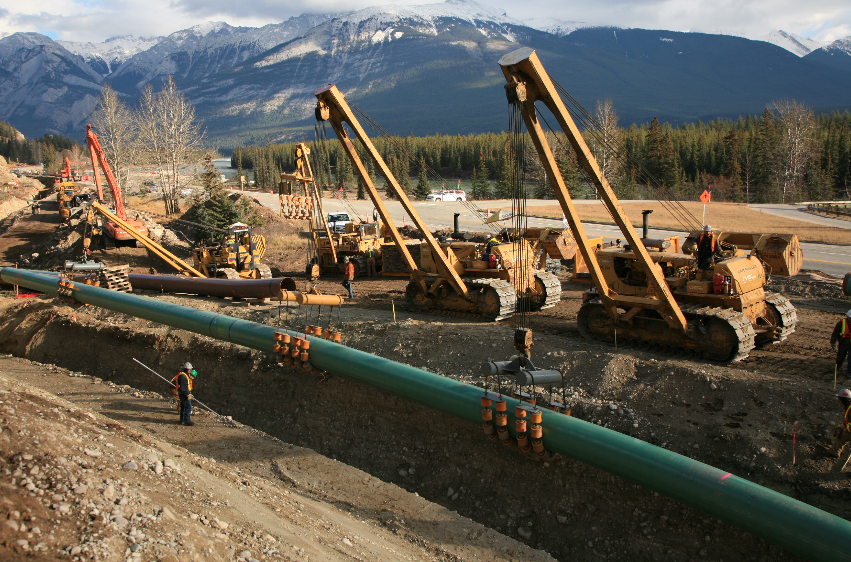 C. Kenneth Reeder is a Calgary financial analyst providing mergers and acquisitions advisory services for midsized, privately held companies in  Western Canada. He works with many clients in the oilfield services sector.  He is also the editor of  CanadianMarketReview.com.