The Fungus Beneath Your Feet

And why some farmers will be ‘soiling their undies’

Did you know that there are more micro-organisms in a teaspoon of healthy soil than there are people on this planet?

There is a whole world in the soil—consisting of bacteria, fungi, nematodes, beetles, mites, earthworms, algae, and so on—that can have profound effects on land productivity. These micro-organisms work together to decompose organic matter, provide nutrients, and can even aid in the control of crop pests. Understanding this, we have been able to source, culture, and apply certain microbes for the benefit of crops. These include:

"There are many different types of fungi and bacteria that are able to breakdown hydrocarbons from petroleum-contaminated soils."

Any production of legume crops is accompanied by a species from this family of bacteria. Bacteria forms mutually beneficial relationships with plant roots by fixing nitrogen for the plant in return for carbohydrates from photosynthesis. It is important to have the right strain of rhizobia for the different kinds of pulse crops such as beans, peas, lentils, etc.

Benefits to Plants: The production of plant-available nitrogen from rhizobium provides a constant source of nitrogen for plant growth and development. In most cases, plant roots can “leak” excess nitrogen, which can be used by other plants, carry over to next year’s crops or help microbes decompose plant residues.

Benefits to Soil: Rhizobia are major contributors to soil nitrogen through the breakdown of legume crop residues. These residues are rich in nitrogen and promote the culture of a diverse soil community. The increased diversity improves soil fertility, nutrient cycling, soil structure, and overall soil health.

This fungus lives in the soil from year to year and forms symbiotic relationships with plant roots. The plants provide the fungi with a source of carbohydrates from photosynthesis, while the colonized mycorrhizae act as extensions on the plant roots.

Not all plants are able to form this relationship. Canola is a popular crop that unfortunately is not able to form symbiotic relationships with this fungi, and often reduces populations in the soil.

Benefits to Plants: The greatest benefit is better uptake of nutrients, particularly phosphorus, and water. This allows for healthy, vigorous plants that can better withstand stresses such as disease, salinity and drought.

Benefits to Soil: The better root development caused by this fungi can have immediate effects on soil structure. Most notably, better permeability of air and increased water infiltration that leads to increased erosion, crusting and compaction resistance.

There are many different types of fungi and bacteria that are able to break down hydrocarbons from petroleum-contaminated soils. This has become an area of focus in environmental science to help remediate ecosystems after oil and gas spills, as well as the shutting down of rigs.

Benefits to Plants: It is rare to find plant growth on contaminated sites. Like microbes, some plants are able to tolerate certain levels of contamination. Usually, these plants have little to no value—they are often considered weeds. If remediated properly, the soils can become productive again over time.

Benefits to Soil: Breaking down the hydrocarbons allows for the survival of other species that could not live in the soil before. Establishing a healthy soil ecosystem on contaminated sites is essential to soil health and structure for the production of plants. 

If you would like to test how healthy your soil community is, all you have to do is soil your undies! This year, the Soil Conservation Council of Canada introduced the “Soil Your Undies” challenge to demonstrate to growers the importance of biological activity in the soil.

Purchase a pair of 100 per cent cotton white briefs.

Bury them in a narrow six-inch trench in the spring, and mark the spot with a flag.

After two months, dig up your undies and evaluate the decomposition.

If the undies look like chewed-up rags, then the soil is full of life and biological activity. The opposite is true if the underwear comes out looking much the same, suggesting that the soil is tired and overused.

Give it a try this spring and evaluate different parts of the field (cropped area vs. right-of-way vs. fence line) to get an idea of the productivity potential of your soil! 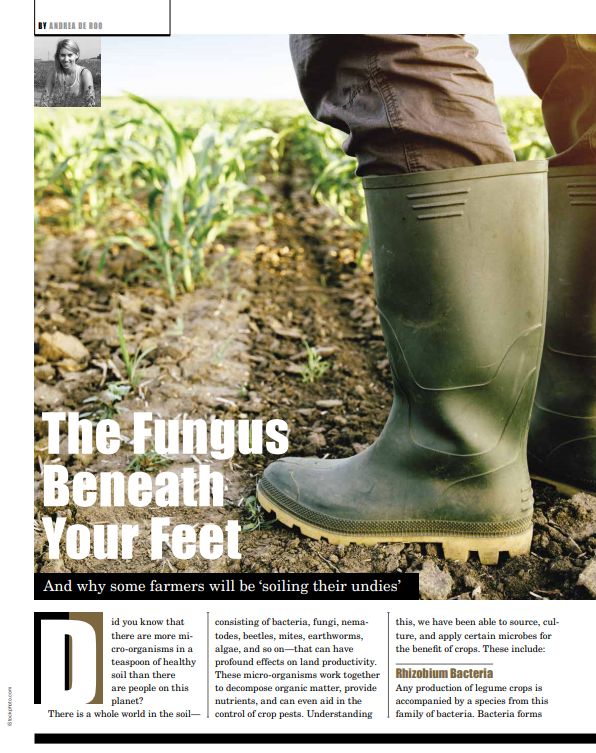 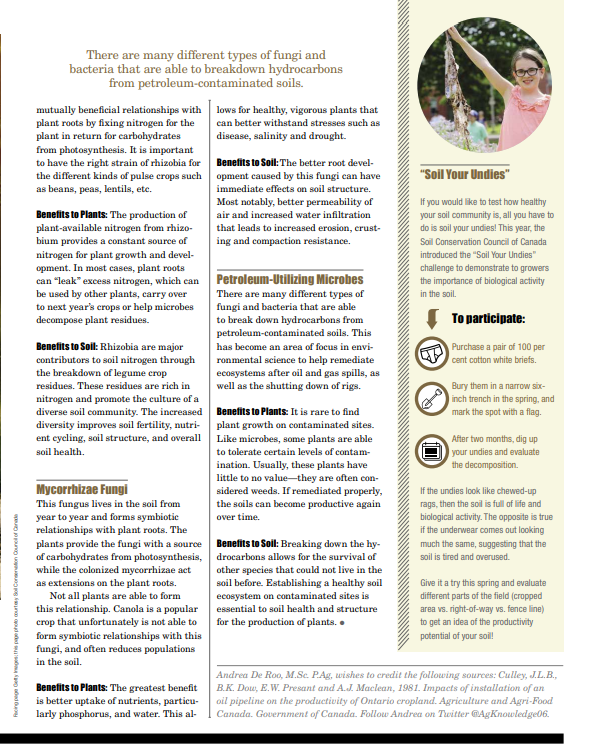