Listen to the Audio Mises Wire version of this article.

With the introduction of the Equality Act of 2021—and its passage in the House—the Democratic Party and its allies continue the now well-established tradition of using “antidiscrimination” and “public accommodation” laws to continue the attack on the private sector and private institutions once somewhat insulated from regime control.

Historically these laws, acts, and court rulings—found initially in the Civil Rights Act of 1964—focused largely on regulating hiring and the provision of services at private institutions. These legislative and judicial acts regulate how private owners of restaurants and hotels—and a wide variety of other private establishments—enter into verbal or written contracts with potential employees, clients, and customers.

Initially, these mandates focused on regulating how business provide services to religious minorities and what the Canadians call “visible minorities”—i.e., non-whites. The laws began with just regulating private for-profit "public carriers" and organizations known to provide "public accommodation" of basic necessities.  The Equality Act, however, greatly expands these federal powers. First, the Act continues to expand the groups that are considered “protected” groups, most notably LGBT groups. Second, while older provisions tended to target run-of-the-mill businesses, the Act now expands federal power in order to regulate religious institutions, as well. The Act moves to ensure that fewer and fewer Americans will be able to exercise the free exercise of religion as a means of avoiding federal mandates. The Act also expands federal control over medical institutions and employees.

It has become clear that these laws are a fruitful and convenient vehicle—from the policymaker’s perspective—to advancing federal control over all of private life. As time goes on, expect lawmakers to turn again and again to these laws as a means of expanding government control of private organizations of every size, shape, purpose, mission, and religion.

What Is the Equality Act?

How exactly does the Equality Act expand regime control over the private sector? It redefines which organizations are subject to "public accommodation" laws, and it adds new interest groups that private sector institutions will be forced to service in a manner to the regime's liking.  For instance, the act would make it discriminatory to deny certain medical procedures to transgender persons:

[t]he Equality Act would force hospitals and insurers to provide and pay for [sexual transition] therapies against any moral or medical objections [raised by medical personnel]. It would politicize medicine by forcing professionals to act against their best medical judgment and provide transition-affirming therapies.

The Act goes well beyond only medical institutions:

Notable among these is the expansion to “shelters” which include domestic violence shelters. Under the Equality Act, these organizations would be required to house males self-identifying as women in shelters alongside abused women.

The inclusion of salons is also notable, since—as was exhibited by the notorious Jessica Yaniv case in Canada—public accommodation mandates would likely erase the ability of salons to limit waxing services to women only. Naturally, as in the Yaniv case, the employees at these institutions could potentially be forced into waxing men’s genitals provided those men identify as women.

The Act also could easily be interpreted as a blanket ban on refusals to perform abortions:

The Equality Act bans discrimination on the basis of “pregnancy, childbirth, or a related medical condition,” and courts and the federal government have interpreted “related medical condition” to mean “abortion.” It is, therefore, quite conceivable that courts could soon interpret the Equality Act as requiring private insurance and government health-care programs to fund abortion.

The Abolition of Religious Exemptions

But perhaps most central to the Act are its provisions to reduce exemptions for religious persons and institutions. Historically, federal law and federal court decisions have in many cases noted that religious institutions—if the First Amendment of the Bill of Rights is to mean anything—must be able to behave in ways that are compatible with religious belief. Thus, in some cases, a church or other religious organization can refuse to hire persons who espouse ideology or behavior that stands contrary to a religious group’s beliefs. Similarly, in some cases, a religious doctor or nurse could have found some protections under these provisions for refusing to perform religiously objectionable medical procedures such as sex reassignment surgery or abortions.

This has always been rather weak tea in terms of limiting federal powers, since it restricts private discretion to only those acts that are religiously motivated. Moreover, government agents themselves—i.e., government judges—have also often arrogated to themselves the power to determine if a discriminatory decision fits under any known religious category. In other words, the government will tell you if your legal defense can be defined as a religious defense. Moreover, as the Masterpiece Cake Shop case and similar cases have shown, even religious objections fail to provide much in the way of protection from these legal mandates.

Nevertheless, even these few and weak loopholes are too much for backers of the Equality Act which is designed to further restrict religious freedom:

University of Virginia law professor Douglas Laycock has warned that the Equality Act would “crush” religious dissenters. “It goes very far to stamp out religious exemptions…. It regulates religious non-profits. And then it says that [the Religious Freedom Restoration Act] does not apply to any claim under the Equality Act. This would be the first time Congress has limited the reach of RFRA. This is not a good-faith attempt to reconcile competing interests. It is an attempt by one side to grab all the disputed territory and to crush the other side.”

If the Act passes, we should expect an avalanche of lawsuits against religious schools and similar institutions that attempt to hire only employees who reflect the organizations' missions.

A Doorway to Widespread Regulation of Private Life

This was to be expected. The public accommodation provisions have long served as a doorway for federal regulators to enter and manage the daily minutiae of private life and the private sector. The expansion of these powers under the Equality Act is only the next logical step. After all, this body of law has always constituted a direct assault on the private sector and the institution of private property, bringing more and more of private life under the watchful eye of government bureaucrats. It has provided an excuse for government regulators to investigate, fine, sue, and otherwise harass and destroy business owners in a wide variety of ways. For those business owners who cannot afford a legal defense, there is no recourse.

Naturally, this is all to the benefit of the regime itself. As Ludwig von Mises has noted, private property is an institution that is absolutely central and essential in limiting government power and in providing some small realm of freedom beyond the reach of the regime's coercion. Like market institutions and the family, religious institutions are themselves within the private sector and a key part of what the early laissez-faire liberals called "society." Society represents those noncoercive institutions that are to be contrasted with the state and its mandates, imposed under threat of fines and imprisonment. All else being equal, it's a good thing that religious organizations have been able to exercise discretion in "discrimination" even if these same freedoms were denied to others. Some freedom—what some might call loopholes—is preferable to no freedom.

But that was never enough for the advocates of the Equality Act, and they're now moving faster in the wrong direction. The small bit of freedom carved out for religious institutions is being reduced further and religious institutions are likely to soon be considered more or less indistinguishable from long-beleaguered commercial organizations.

The Answer Lies in Private Property

But what we can we do about the problem of private sector discrimination that's truly designed to disadvantage some specific minority group? Ironically, the answer lies in protecting private property.

For those of us who are concerned about increasing access to goods and services for minority groups—ethnic and otherwise—it is most effective to combat the regime's restrictions on private sector activities and lower barriers to entry in the marketplace. The legal public accommodation edifice is largely built on the idea that firms headed by bigots will be able to establish partial or total monopolies that can dictate to consumers who can buy what. In a reasonably free economy, however, this is extremely unlikely. As I have shown in the past, we can find many examples of much-discriminated-against Japanese Americans and Latinos—and in other groups that have built up ethnic economic enclaves—rushing to provide a responsive economic foundation of goods and services built around the needs of their group. If our goal is to broaden and expand services—and those who can count on them—the last thing we need is an ever more repressive legal regime built on the constant threat of lawsuits and fines for organizations that run afoul of the regime's ideological preferences.

On the other hand, it is unlikely that the backers of the Equality Act are actually motivated by securing economic prosperity for constituents. Rather, this is about settling political scores—carving out privileges for certain interest groups at the expense of other interest groups. In other words, it's a culture war. And that means maximizing the regime's ability to dole out favors and punishments. 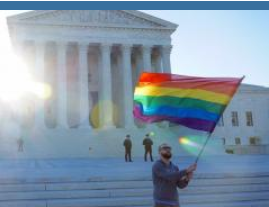 Ryan McMaken (@ryanmcmaken) is a senior editor at the Mises Institute. Send him your article submissions for the Mises Wire and Power&Market, but read article guidelines first. Ryan has degrees in economics and political science from the University of Colorado and was a housing economist for the State of Colorado. He is the author of Commie Cowboys: The Bourgeoisie and the Nation-State in the Western Genre.