The Death of Oil—and of Pipelines—Has Been Greatly Exaggerated

Normally, it doesn’t get much more boring than a long report from a federal agency.

Yet in November 2020, the Canadian Energy Regulator (CER) released a curious analysis about “Canada’s Energy Future” and provoked a lot of commentary.

The report spawned a lot of provocative headlines, which can be summed up as follows: “CER says there’s no need for more pipelines!”

Reaction to this report has generally revealed more about the reporter than the document itself. It appears that most people focused on a single chart and interpreted it to validate their own ideological agendas.

Various media outlets, environmentalists and politicians, recognizing no limits to their own wisdom and foresight in shaping our economic future, declared that this report “proves” no more pipelines are needed in Canada. To wit, the TMX and Keystone XL projects are not “needed” at all.

“Regulators have no skin in the game.”

But the report doesn’t really say this. And even if it did, so what? It appears completely unrelated to what markets themselves think we need.

Forecasts by regulators are irrelevant

Remember, the CER is just the National Energy Board (NEB). Literally — it’s the same regulator with a new name. These are bureaucrats, cronies and political pals. Their purpose is to preserve and manage special “natural monopolies” (in simpler times we’d have simply called them “cartels”), not make investment decisions. Forecasting and scenario analysis is not their forte.

Regulators have no skin in the game. They have no capital at risk. They are not rewarded or punished by their ability to predict future consumer choices the way entrepreneurs are. Their projections tend to be irrelevant at best.

Let’s look at the part of this report on which everyone’s been focusing. Under one contemplated scenario in the report, which assumes increasing interventions in carbon fuel production and use, crude oil available for export will be less than maximum pipeline capacity.

Even taking the report at face value, the “no more pipelines needed” argument assumes that having extra capacity available to serve different markets is somehow inherently bad.

But why? We’ve seen the problems of constrained capacity in recent years: lower prices and greater volatility, centrally planned production “curtailments” and crowding out other customers on rail transport.

More flexible capacity to pump oil to more diverse markets — to reach the most urgent consumers over time — is a good thing. Have people forgotten why lack of pipeline capacity has been a problem in the first place?

The report also acknowledges that it cannot account for unforeseen technological innovations (surely an important factor over the next 30 years!), but there is actually a much more fundamental issue here.

The assumptions underlying the lower production peak scenario include the idea that government is going to increasingly restrict fossil fuels. The anti-pipeline crowd takes this assumption as proof that pipelines are not needed.

This is fallacious thinking that creates a perverse loop of self-reinforcing nonsense.

Think about it: politicians make outlandish proclamations about centrally planning the climate, plans they may or may not be willing (or able) to follow through on. Then a regulator makes some economic models trying to predict what those plans might entail. This doesn’t actually tell you what you do or do not “need,” but some people like to think it does.

Assumptions about what will happen 30 years from now are always very dubious, especially when you’re looking into the government’s own crystal ball.

What does the market think?

So what does the market think about the need for Canadian oil exports?

Global oil consumption is going to continue growing for several decades. This is undeniable. To meet these needs, many companies wanted to build pipelines until forced into cancellation by overt or passive-aggressive political threats.

Trans Mountain has long-term contracts that will use 80 per cent of the pipeline’s capacity for decades. Keystone XL isn’t just to make Alberta oil producers happy, it’s to provide better value to refiners in the Gulf of Mexico. The Americans want it. Meanwhile, the Capline reversal will be able to pump hundreds of thousands of barrels of Canadian heavy crude to Louisiana refiners by 2022. Line 3 received its final permits and is still going ahead.

Does this sound like the people actually making investment decisions think new pipelines are pointless?

Far too many people vastly overestimate the speed of an energy transition on the scale envisioned. Historically, these transitions take a very long time. Even though the first commercial well was drilled over 150 years ago, oil did not become the world’s main energy source until the 1970s. Until then, coal and biomass made up the biggest piece of the energy-consumption pie.

We are one of the richest countries in the world and live in astonishing comfort by historical standards. Many Canadians have no idea how unrepresentative we are of the rest of the world. Canada is a massive country, but hardly anyone actually lives here. We have less than half a per cent of the world’s population.

“Many companies wanted to build pipelines until forced into cancellation by overt or passive-aggressive political threats.”

We Canadians might not need to increase consumption of oil much, or at all, to maintain our lifestyles. But in recognizing this it’s easy for us to forget just how much economic growth is needed to raise standards of living in the world’s poorer places. For goodness’ sake, there are still almost a billion people on Earth who lack reliable electricity, something we decadent Canadians take for granted.

It’s hard to anticipate what we will need in the future, which is why the market works well to coordinate diverse wants and needs and priorities. What we don’t need are politicians and activists telling us what we need. 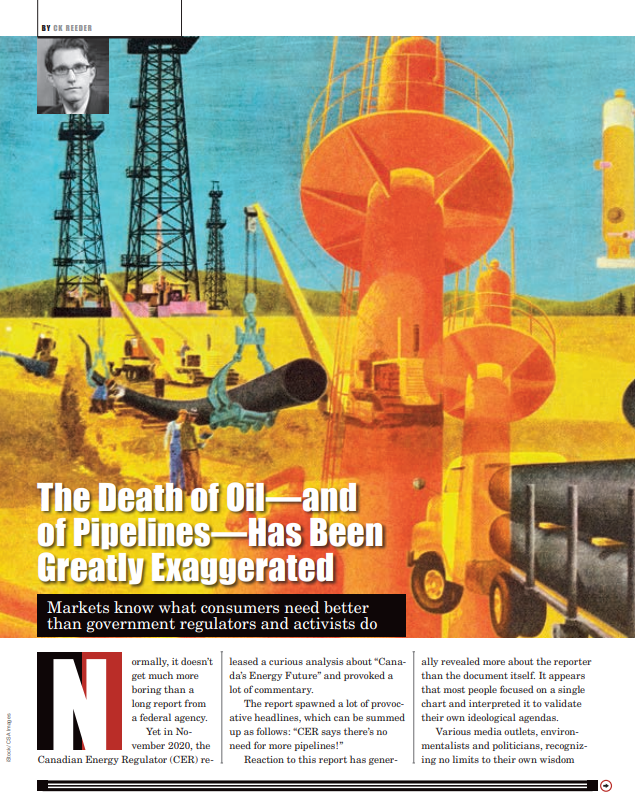 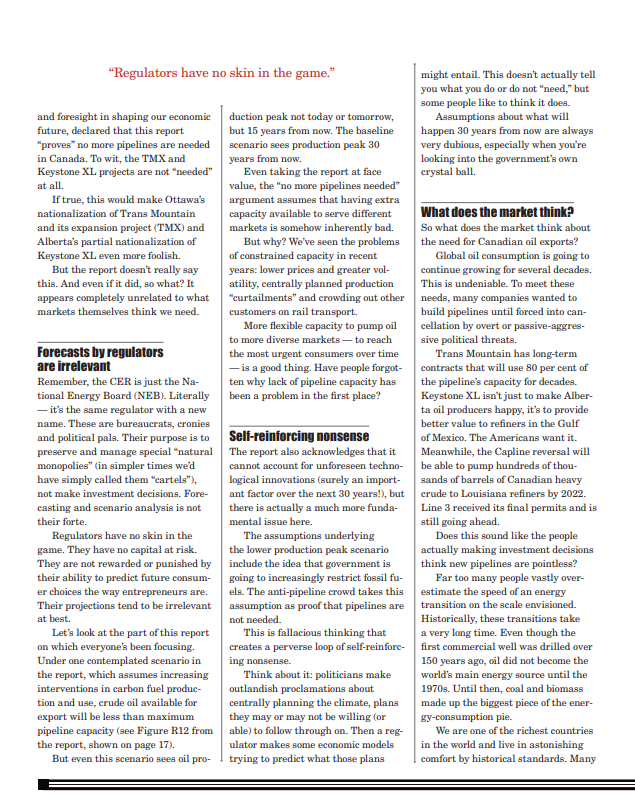 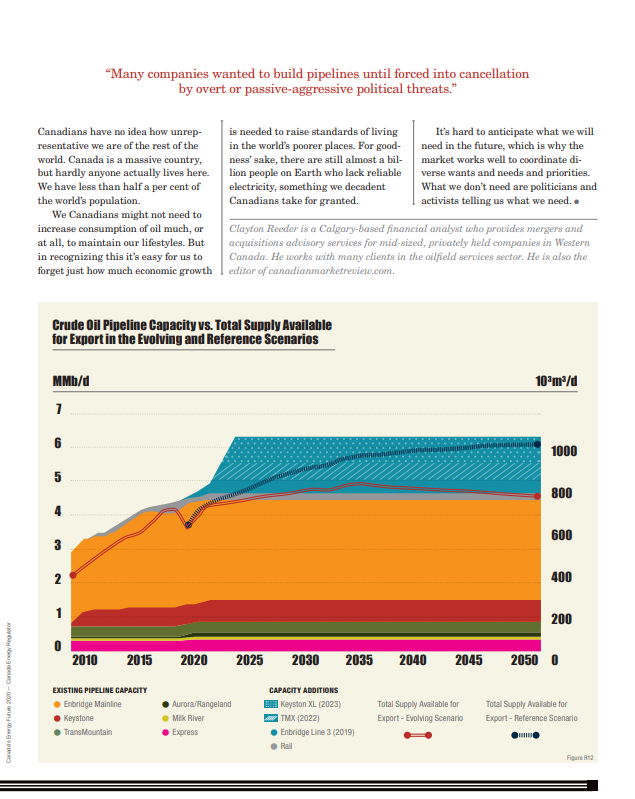