The Art and Science of Reclamation

The Line 3 Replacement corridor is expected to be better than it was before.

Enbridge’s newly constructed Line 3 Replacement Program (L3RP) pipeline runs for 1,070 kilometres in Canada, through parts of the three Prairie provinces from Hardisty, Alta., to the Manitoba-North Dakota border near Gretna. It crosses nearly 2,200 parcels, encompassing farm and pastureland, numerous creeks and wetlands and larger water bodies like the South Saskatchewan and Souris rivers.

The Canadian portion of the new pipeline has been in service since December 2019 and most of the land along the project right-of-way (RoW) has already been returned to a pre-construction state.

What remains to be reclaimed this season is a stretch of some 110 km in southeastern Saskatchewan and southwestern Manitoba (construction spreads 5, 6 and 7) that could not be completed last year before the early arrival of wet and cold weather conditions. Most reclamation occurs within the first year following construction. However, it can take longer, depending on weather and other environmental conditions.

“Our promise is to restore the pipeline right-of-way to as good or better condition than it was before construction, and to minimize the long-term impact to the land along our pipelines,” says Allen Sawatzky, Manager of Construction for the L3RP. “We continue to do what we said we would do.”

Banister Pipelines is overseeing a crew of about 280 workers for the final reclamation, which began in mid-June and includes grading, replacing topsoil and final cleanup, out of a main base in Moosomin and a satellite office in Brandon.

A critical component of right-of- way reclamation involves working with landowners, from the outset of a project, to reach agreement on property- specific items that will be addressed during and after construction.

During excavation for the Line 3 replacement pipeline, topsoil was separated from the subsoil to ensure the land remains productive for agricultural purposes after construction. The land was re-contoured to maintain drainage patterns, hay land and native prairie areas were reseeded, cultivated land was prepared for planting, and wetlands and watercourses were stabilized and revegetated to prevent erosion and ensure habitat is restored for the many plants and wildlife along the line.

“Segregating topsoil during construction enhances restoration by returning the nutrients and seed back to the ground surface after construction,” says Sawatzky. “We also straw crimp, seed and monitor the right-of-way until vegetation is re-established. In some cases, we work with landowners and environmental agencies to enhance restoration, such as planting trees along streams or managing invasive species.”

Although most temporary workspaces will be allowed to grow back, Enbridge generally maintains the permanent right-of-way free of structures, trees and shrubs so the pipeline is visible during aerial inspections and accessible in the case of an emergency.

In mid-April, six weeks before this season’s final reclamation/topsoil replacement began, task-specific crews were already being deployed in other parts of the L3RP RoW, beginning what Enbridge refers to as ‘deficiency-warranty work’ — activities such as repairing ditches, fences, gates and signs, re-seeding areas of slow growth and adding straw crimping for erosion control in areas where the previous covering had seen stress with a strong spring wind. General ‘housekeeping’ activity will continue through the season.

“We are always monitoring the right-of-way, particularly during and after spring breakup,” explains Sawatzky. “If there’s an issue because of our activities, we’ll come out and make the repairs necessary. We have much respect for all landowners. We are guests on their land.”

This monitoring involves keeping an eye out for any new infestations of weeds along the RoW, in which case, with landowner approval, Enbridge will launch vegetation and weed management to control the spread of new weeds. Ongoing weed management is part of a comprehensive Enbridge biosecurity program developed with input from CAEPLA, landowners, provincial agriculture departments, researchers, and industry experts.

Meanwhile, as of late June, the final L3RP reclamation was proceeding smoothly, thanks to cooperation from Mother Nature. It’s expected to take place over summer and into the fall.

“As I like to say: ‘If you can’t combine, you probably can’t pipeline.’”

Enbridge takes numerous measures to minimize the long-term impact along our pipeline rights-of-way. Here are the steps involved:

➥ After pipe installation but prior to topsoil replacement, environmental crews respond to subsidence and/or drainage issues that create access problems for farmers or landowners, public safety issues or to prevent environmental issues such as erosion;

➥ Next, crews pull the stored topsoil piles back over the right-of-way and distribute it evenly over the area in which it came from, preparing the areas for seeding and revegetation;

➥ Finally, native prairie and hay lands areas are seeded, cultivated lands are straw crimped to prepare for the planting of the next crop and pasture-land fences are repaired. 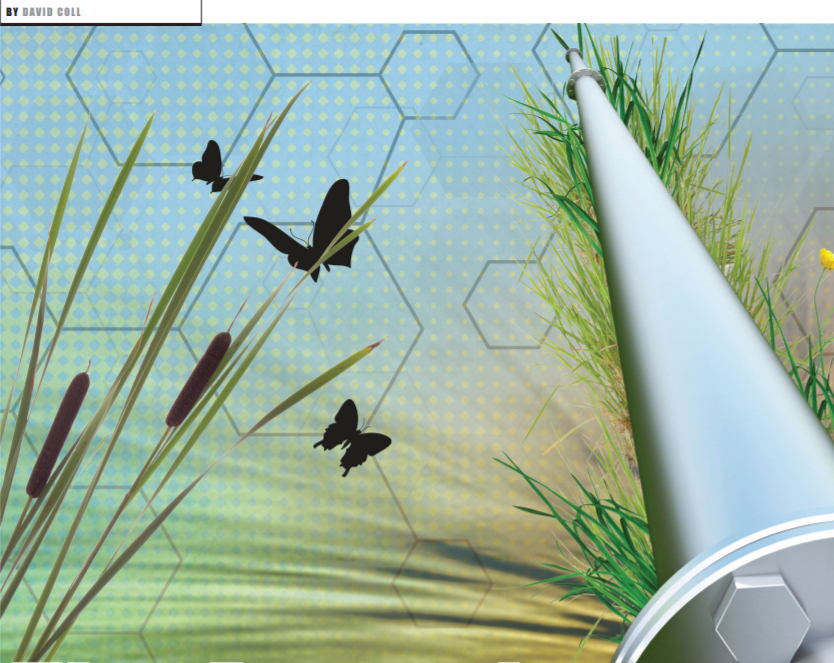