TC Energy Corp. has restarted a section of the main trunk of its Keystone pipeline from Hardisty, Alta. to the U.S. Midwest, as well as a branch extending eastward to Illinois, following a large spill of crude into a Kansas creek last week.

The company said in a statement late Wednesday that it had resumed flows on sections that were unaffected by the 14,000-barrel spill on Dec. 7. “The affected segment of the Keystone Pipeline System remains safely isolated as investigation, recovery, repair and remediation continues to advance,” TC Energy said.

The affected portion of the pipeline won’t be restarted until it is safe to do so and approved by the company’s U.S. regulator, the Pipeline and Hazardous Materials Safety Administration (PHMSA), TC Energy said.

The company has not provided a timeline for a complete restart of the line, nor has it indicated what caused the failure that resulted in one of the worst onshore crude spills in the U.S. in nearly a decade.

Producers and analysts had speculated that a partial restart would be possible since the location of the spill is directly south of Keystone’s junction in Steele City, Neb.

However, the remaining outage will continue to hinder flows of crude oil to a key storage hub at Cushing, Okla., and on to U.S. Gulf Coast refineries.

The disruption to operations on the 622,000-barrel-a-day pipeline is particularly frustrating for Canadian producers who were already contending with a growing price discount on Canadian heavy crude oil, compared with benchmark West Texas Intermediate (WTI).

A combination of factors — from a shortage of refinery space and plummeting prices for some refined products made from heavy oil, to the release of primarily sour barrels from the U.S. Strategic Petroleum Reserve — has caused the price of benchmark Western Canadian Select (WCS) to fall over the past six months.

Storage and pipeline export capacity in Alberta has improved, however, since the last time there was a Keystone outage in 2019. Expansion of Enbridge Inc.’s Line 3 boosted overall export capacity last year, and analysts say they expect more Canadian barrels to be put into storage rather than sold at a discount.

Even prior to the latest spill, questions had been raised about a special federal U.S. permit issued to TC Energy allowing it to operate Keystone at a higher pressure than other pipelines.

A U.S. Government Accountability Office (GAO) report issued last year noted that Keystone’s permit was developed to provide for safe operations at 80 per cent specified minimum yield strength, rather than the 72 per cent maximum governing all other hazardous liquid pipelines in the U.S. Specified minimum yield strength represents the stress level at which a steel pipeline will begin to deform.

Some American environmental and landowner rights groups have actively campaigned to see Keystone’s special permit revoked and have pointed to the latest incident as proof that U.S. authorities should intervene.

“My initial reaction was, here we go again,” said Jane Kleeb, founder of the group Bold Nebraska which opposed Keystone XL and is chair of Nebraska’s Democratic Party. “This is a pipeline that should be shut down, it has too many failures in a short amount of time to continue operating safely.”
Other energy sector experts have argued that pipelines are typically safer than other oil and gas transportation conduits, particularly oil by rail.

“This restart facilitates safe transportation of the energy that customers and North Americans rely on,” TC Energy said in its statement Thursday. 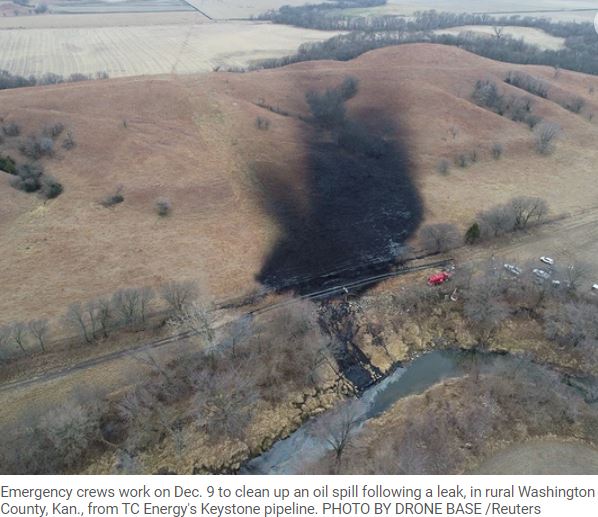