CAEPLA wishes Russ Girling all the best in his future endeavours and looks forward to getting to know his his successor, Francois Poirier.

Mr. Girling's departure marks the end of the most interesting and tumultuous era in Canadian pipeline history, and TC pipeline landowners welcome the opportunity to renew their working relationship with the company.

The long-standing chief executive of TC Energy Corp. is set to retire having overseen a corporate name change and dramatic growth and stock price appreciation, but without achieving completion of the contentious Keystone XL pipeline project.

The Calgary-based pipeline, utility and power generation company has announced that Russ Girling will retire at the end of this year after 10 years as president and CEO, also giving up his seat on the board of directors.

He is to be replaced as director and CEO by chief operating officer Francois Poirier, who is also president for power and storage and Mexican operations.

Girling said in a statement it has been a “privilege and honour” to lead TC Energy.

“With the wisdom and guidance of the board and the skills and tenacity of our dedicated employees, we have accomplished many things, delivered the energy critical to millions of people safely and reliably every day, and created significant shareholder value,” he said.

“I am grateful for the opportunity and confident in how the company is positioned to prosper as global demand for energy.”

Girling’s age was listed as 57 in the company’s management information circular in February.

The timing is a surprise but the replacement isn’t, said analyst Ian Gillies of Stifel FirstEnergy in a report.

He pointed out that the company’s stock has increased by more than 68 per cent since Girling was named CEO on July 1, 2010, and the company has paid out about $23.84 per share in cumulative dividends.

The Keystone XL pipeline expansion has been the most-watched TC project during Girling’s tenure although it was first proposed before he became CEO, in 2008, when George W. Bush was U.S. president.

In March, the company approved construction of the US$8-billion project to transport up to 830,000 barrels per day of oil from Alberta to Nebraska after the provincial government agreed to invest about US$1.1 billion (C$1.5 billion) as equity and guarantee a US$4.2-billion project loan.

Its future is still in doubt, however, as Democratic candidate Joe Biden has said he would cancel the vital Keystone XL presidential permit if he is elected president in November.

The growing difficulty of getting cross-border pipelines built was cited by analysts as part of the strategy when TC Energy changed its name from TransCanada Corp. in May 2019.

The company, however, maintained it was due to its growing presence in the United States through deals like its US$13-billion purchase of U.S. natural gas transporter Columbia Pipeline Group, along with its growing roster of natural gas pipelines in Mexico.

Girling has led the company through a “period of unprecedented growth and transformation” said TC chairman Siim Vanaselja in a statement.

“His discipline, integrity and strategic leadership have been instrumental in the success our company has enjoyed,” he said.

TC said Girling and Poirier were not available for interviews on Monday.

Poirier joined the company in 2014 as president, Energy East Pipeline (a project cancelled in 2017), after about 25 years in investment banking.

Girling is expected to help Poirier with the transition through Feb. 28. 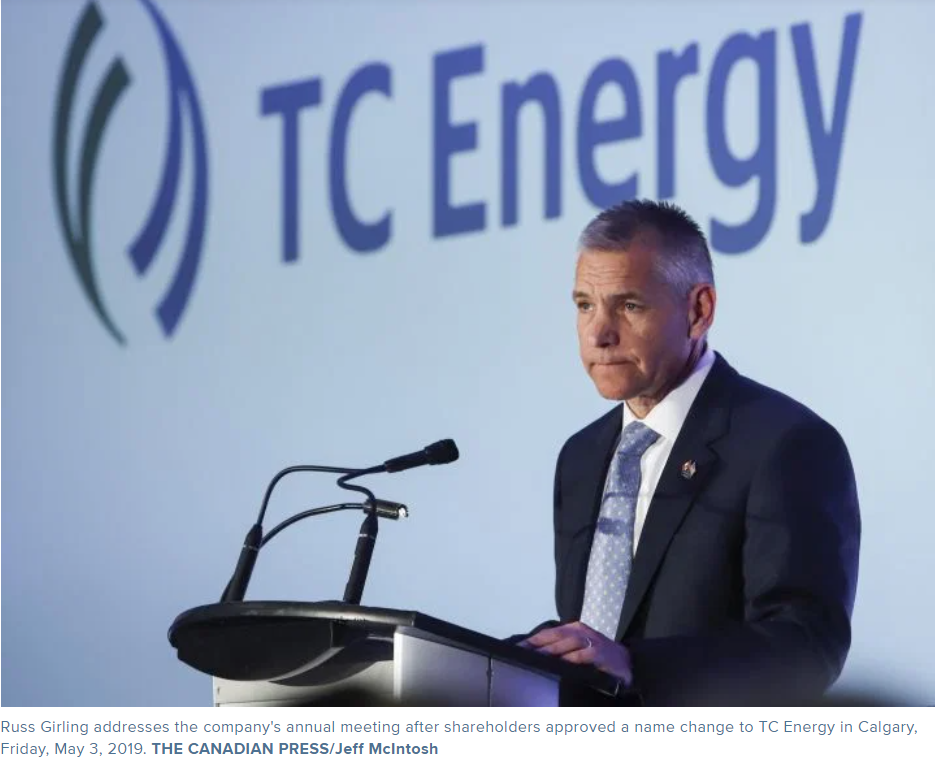