The Supreme Court of Canada has decided not to hear five challenges from environment and Indigenous groups from British Columbia.

Some wanted the top court to consider whether the Liberal cabinet violated the Species at Risk Act when it decided to approve the pipeline expansion a second time in June 2019, arguing the project would harm highly endangered southern resident killer whales.

The Federal Court of Appeal had overturned cabinet's first approval of the pipeline in 2018, citing insufficient consultation with Indigenous Peoples and a failure to take the impacts on marine animals into account.

After another round of Indigenous consultations and a second look at marine impacts, cabinet gave a second green light, but the same Indigenous communities and environment groups that successfully challenged the approval in 2018 filed new appeals in 2019.

The Federal Court of Appeal heard -- and dismissed last month -- appeals from Indigenous communities over whether there had been enough consultation, but declined to hear arguments from the environment groups.

B.C. Nature, the Raincoast Conservation Foundation and the Living Oceans Society, the Tsleil-Waututh First Nation, the Squamish First Nation and a group of four young people then asked the highest court for a review. These are the cases the Supreme Court chose not to hear.

As usual, the Supreme Court did not give any reasons for its decision released Thursday.

There are fewer than 75 southern resident killer whales left and MacDuffee said they would be harmed by the noise from the expected increase in oil tankers carrying diluted bitumen from the expanded pipeline.

MacDuffee said there is no technology now that can reduce the impacts that noise from the boats would have on the whales, which means forging ahead with the pipeline is inconsistent with upholding the legislation.

"The effects have to be mitigated for the project to proceed and none of that has happened in Trans Mountain," MacDuffee said earlier this year.

The environment groups that mounted the legal challenges to the pipeline reacted with disappointment to the Supreme Court decision Thursday.

Margot Venton, a lawyer for EcoJustice representing Raincoast in the appeal, said the ruling means construction on the Trans Mountain pipeline project will be allowed to proceed, despite the fact it will push an endangered population towards extinction.

"This scenario should serve as a wake-up call. The Species at Risk Act is a strong law on paper. But if the government is allowed to shirk its responsibilities under that law, then there is something fundamentally wrong with how Canadian species protection works in practice," Venton said in a statement Thursday.

Karen Wristen, executive director of Living Oceans Society, which partnered with Raincoast in its appeal, said she is "deeply concerned" about what the court's decision will mean for the future of the southern resident killer whales.

"As of this past summer, only 73 southern residents remained. Another whale, L41, has gone missing since then and is presumed dead," she said.

"This iconic population already faces more threats than it can withstand, including a critical shortage of Chinook salmon, the whales' main prey, ocean traffic and noise, and pollution. It is difficult to imagine how the whales could survive additional threats from Trans Mountain-related shipping -- not to mention a potential catastrophic oil spill."

She expressed concern, however, over the protests and barricades that blocked rail and road traffic in many parts of the country through most of February in opposition to a separate natural-gas pipeline in northern British Columbia.

The actions were in solidarity with a group of Wet'suwet'en hereditary chiefs and their supporters who oppose the pipeline on their traditional land.

Savage charged that "well-funded and organized groups" that joined the Wet'suwet'en protests could "stand in opposition to future major infrastructure projects, especially oil and gas."

"This type of unrest has serious ramifications on not just Alberta's economy, but all of Canada's. These protesters do not speak on behalf of First Nations, but actually stand in the way of First Nations becoming true partners in prosperity. The rule of law must be maintained so that these projects can be completed on time and on schedule."

This report by The Canadian Press was first published March 5, 2020.

--With files from Mia Rabson 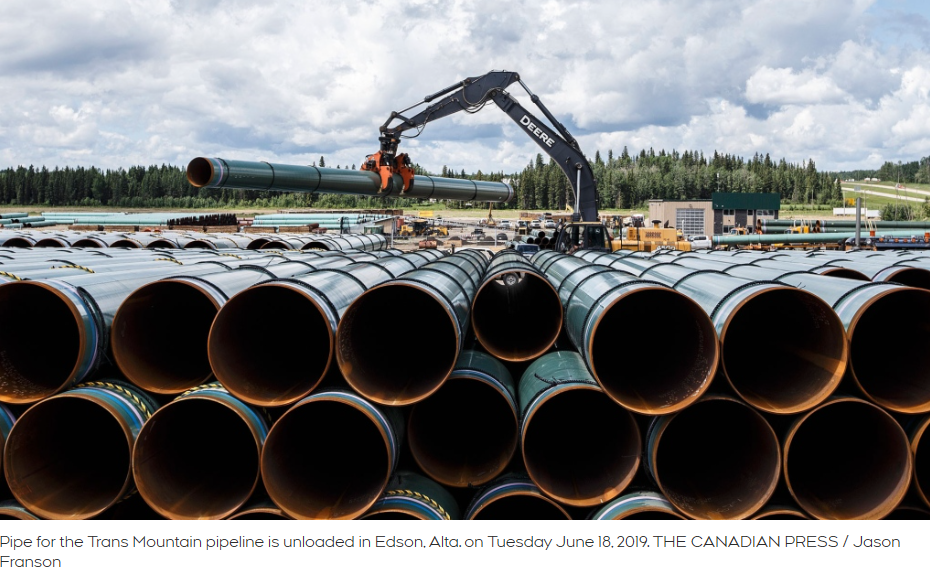