Instead, let’s ignore the privileged few who long for the Dark Ages

“I am constantly irked when industry defends itself against people who want to make dealing with a harsh environment more difficult for their fellow humans by blocking pipelines.”

For most of human history, life was brutish and short. People died of tooth decay, starvation, cold winters, hot summers, infections, disease and dirty water. They toiled from before the sun came up until after the sun went down just to try to find enough calories to keep from dying.

For most of our history we were at war with our environment and each other.

This all started to change with the industrial revolution and the development of the energy industry.

Oil and gas carried by pipelines have dramatically improved the environment humans live in. We have heat in the winter, air conditioning in the summer, clean water, medicine, hygiene and an abundance of food waiting for us at the grocery store. Royalty of yesteryear would be jealous of us. We have transformed and harnessed nature to create a better world.

Most of us haven’t lived through famine or drought, or had to huddle with each other by the fire through a long winter trying not to freeze to death. For this reason, I will cut environmentalists some slack—they come from lives of relative privilege hard won by men and women who faced real adversity and overcame it with ingenuity, entrepreneurship, hard work and the harnessing of resources.

I will avoid seeing anti-energy and anti-pipeline activists as anti-human hypocrites who cut down the very pipelines that give them the position of health, leisure time, security and safety from which to attack the foundation they stand on.

This is why I am constantly irked when industry defends itself against people who want to make dealing with a harsh environment more difficult for their fellow humans by blocking pipelines and taxing and restricting energy.

Most of these people cite climate catastrophe as their reason to restrict energy production and consumption. They seem oblivious to the fact it was the liberation of energy that solved climate catastrophe for humans in the first place and brought us out of the Dark Ages.

Industrialists, capitalists and the men and women doing the hard work of keeping Al Gore’s lights and AC on should not forget that they hold the moral high ground when it comes to the environment for humans. They are the ones taking environmental action, they are the ones lifting humanity out of the dirt and squalor of our natural state. They do not need to defend themselves against anti-human hypocrites—it’s the other way around.

It’s time to stop defending pipelines and start reminding people that pipelines are saving us from a catastrophic climate. That industry is improving the environment for humans, that innovation and even cleaner energy are on the horizon when we commit to liberating energy.

It’s time we stopped paying attention to the privileged minority who want to throw a wrench into the machinery that brought us out of the Dark Ages. It’s time to make them defend themselves for their anti-human position. 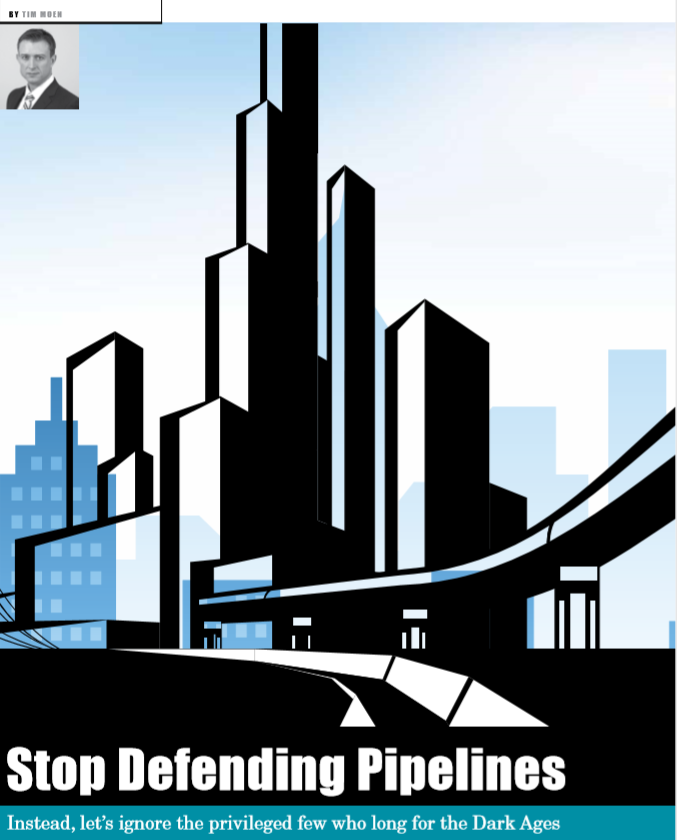 Tim Moen grew up on a farm in Northern Alberta. Leader of the Libertarian Party of Canada, Tim is also a public speaker, filmmaker, businessman, and a firefighter/paramedic.