"The important point when comparing public to private investment projects is not the amounts in play, it’s their economic impact."

It seems the Canadian economy will soon be getting a shot in the arm thanks to U.S. President Donald Trump’s approval of the Keystone XL pipeline project, subject to a renegotiation of terms.

This follows the Canadian government’s announcement last November that it was giving a green light to the expansion of Kinder Morgan's Trans Mountain pipeline and to the project to replace Enbridge’s Line 3, while simultaneously asking the National Energy Board to reject the Northern Gateway pipeline project.

These and other pipeline projects for transporting Alberta oil represent considerable private investment, with positive impacts for Canada as a whole at a time when the federal government is running large annual deficits in the hope of stimulating the economy through infrastructure spending.

The NEB already regulates 73,000 km of oil and gas pipelines that criss-cross the country, from Vancouver to the Atlantic Provinces. This network has been in development since 1853, when the first gas pipeline transported natural gas to Trois-Rivières to light the streets.

The four main projects that have been in the news offer outlets for oil produced in Alberta by connecting the province to ports on the east and west coasts, or in the case of the Keystone XL project, to the American market.

The Energy East project involves the conversion of a 3,000-km gas pipeline connecting Alberta and Ontario, and the construction of a new 1,500-km structure to Saint John, N.B. The approximately 4,500-km structure will transport 1.1 million barrels a day between Hardisty, Alta., and Saint John, and will require an estimated investment of $19.3 billion.

The NEB announced in early January 2017 the assignment of a three-member Hearing Panel to undertake the review of this project after the previous panel stepped down over potential conflict of interest in 2016.

Enbridge’s Northern Gateway project involves two pipelines that would connect Bruderheim, Alta., with Kitimat, B.C. In total, the project would allow for the transport of 718,000 barrels a day over a route of a little under 1,200 km. The construction of these pipelines would necessitate an investment of $7.9 billion.

The federal government approved the project in 2014, imposing 209 conditions, including particular attention to the concerns of Aboriginal communities. The current government, however, is now asking the NEB to reject the project on the grounds that Great Bear Rainforest is not a suitable place for a pipeline.

The Trans Mountain project involves doubling a network that has existed since 1953 including 1,150 km of pipeline connecting Edmonton with various terminals in British Columbia and Washington State. The addition of around 980 km of pipeline and the return to service of 193 km of existing pipeline would bring the transport capacity of Trans Mountain from 300,000 barrels per day to 890,000.

This infrastructure requires an estimated investment of $6.8 billion. The NEB recommended that the project be approved, with 157 conditions, and the government gave it the green light in November 2016.

The Keystone project includes several phases that already exist, the first of which began operating in June 2010 following a different route. The capacity of the preceding phases is limited to 591,000 barrels of oil per day.

The project was evaluated at $8 billion, an amount that would be spent mainly in the United States. After being rejected by then-President Barack Obama in November 2015, it has now been approved by President Trump, subject to a renegotiation of terms.

In all, these projects represent substantial investments — a total of $34 billion, excluding the Keystone XL project located largely in the United States.

During construction of the pipelines in Canada, various estimates find that between 12,700 and 21,500 jobs will be created across nearly every Canadian province, from B.C. to New Brunswick (see chart). These jobs would be especially welcome given that some 40,000 have been lost in the energy sector in Alberta with the fall in oil prices.

In the case of eastern Canadian refineries located in Montreal, Lévis and Saint John, the ability to supply themselves with oil within the Canadian market improves their long-term prospects.

Beyond refineries, the petrochemical industry (the polyester production chain in Montreal’s east end, for instance) also depends on competitively priced supplies. These industries and the jobs connected to them would be more secure.

But the main benefit of pipelines is the opening up of access to the global market for oil from the Prairies, allowing producers to obtain a higher price than they currently do. As long as the United States is the only export market for Canadian oil, this sector is dependent on a market which is itself producing more and more oil.

The price differential for a barrel of oil on the internal American market versus the world market implies a loss of revenue for governments, as well as a loss for the Canadian economy that can be estimated at $13.5 billion.

In the hope of stimulating the economy, the federal government announced in its 2016 budget a total of $120 billion devoted to infrastructure over the next 10 years. (The 2017 budget is expected in late February.)

But the real funding devoted to infrastructure under the 2016 budget to date represents just $3.97 billion, or 13.5 per cent of the projected $29.4 billion. Similarly, the proportion of the $120 billion that will actually be devoted to investments in economic infrastructure remains uncertain.

The important point when comparing public to private investment projects, however, is not the amounts in play. It’s their economic impact, which differs markedly for four main reasons.

First, the creation of value is the entire purpose of private investment. Public investment is mostly aimed at fulfilling promises of job creation, and its purpose is first and foremost political.

Second, public infrastructure investment projects regularly run into difficulties, like cost overruns and delays. This kind of risk is implicitly guaranteed by taxpayers.

Third, public infrastructure is funded either by raising Canadians’ tax burden or by growing the public debt that is ultimately supported by taxpayers. In contrast, private investment does not require tax money since private companies run the projects with their own funds. The economic activity generated by this private investment will even contribute to governments’ tax revenue.

Fourth, empirical results from the U.S. show that after 10 years, economic stimulus has no permanent effect on productivity. In contrast, when the government competes less with the private sector in the recruitment of workers and the use of capital, private investment takes over.

Indeed, economic research shows that public spending cuts have positive effects on economic growth, as shown in a study of Canada in the 1990s by renowned Harvard economist Alberto Alesina and two of his colleagues.

Private investment is clearly preferable to public spending, even on infrastructure, in terms of stimulating the economy. Pipeline projects in particular represent substantial economic benefits when considered from a Canadian perspective, and not solely in terms of local spinoffs.

Prime Minister Justin Trudeau has pointed out that pipelines represent the safest way of transporting oil, and that ensuring market access for Canadian resources is one of the most important duties of a prime minister.  Intelligent regulation with predictable delays and clear definitions of federal, provincial and municipal jurisdiction would go a long way toward removing uncertainty from beneficial private investments like pipeline projects.

Youri Chassin is an economist and Research Director at the Montreal Economic Institute (MEI). This is an adapted and updated version of “The Most Efficient Way to Stimulate the Economy: Private Pipelines or Public Infrastructure?” released by the MEI in June 2016 and signed by Joe Oliver and Youri Chassin – for more information, visit www.iedm.org 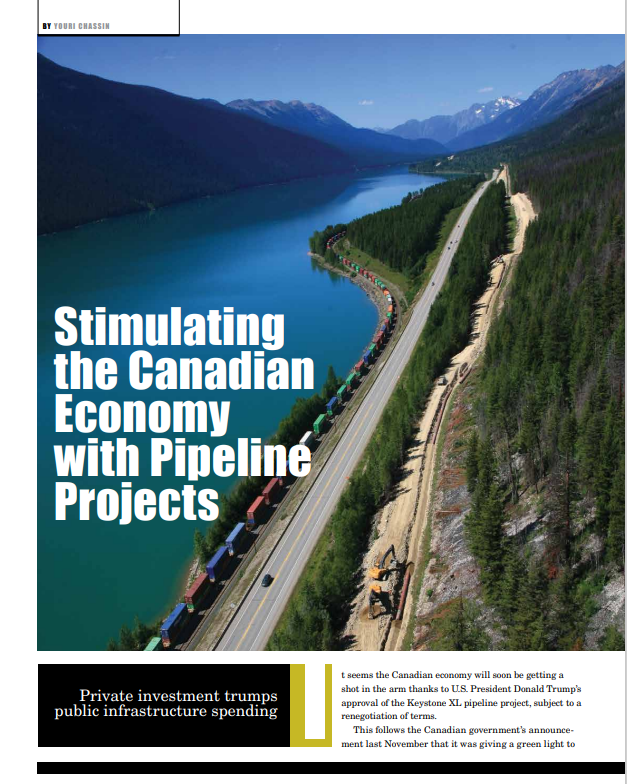 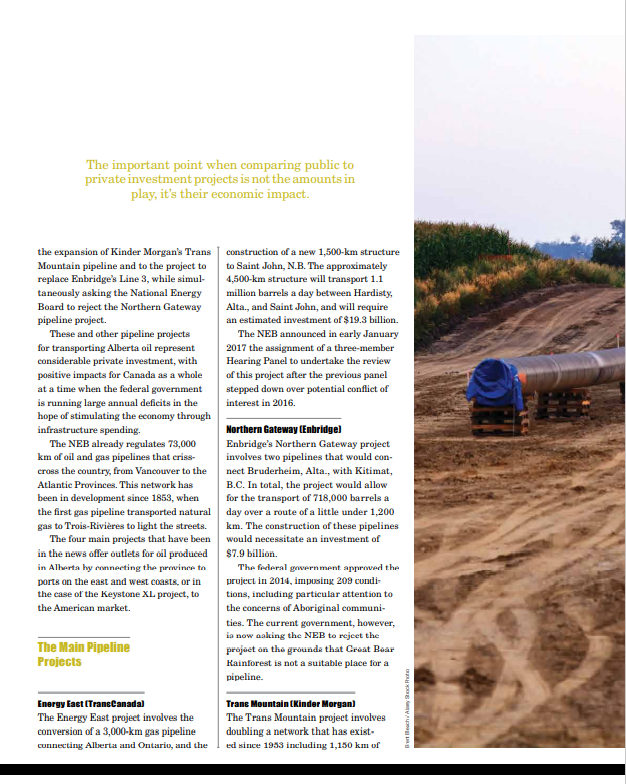 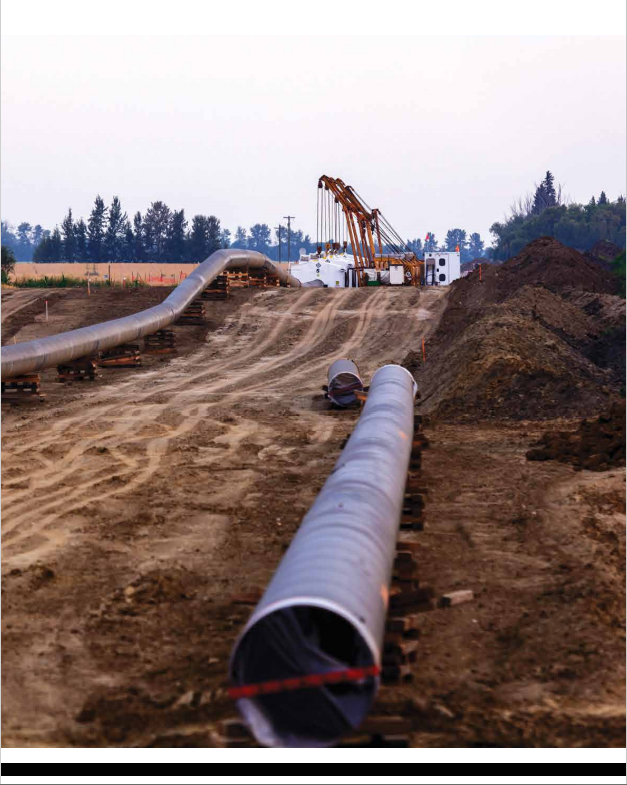 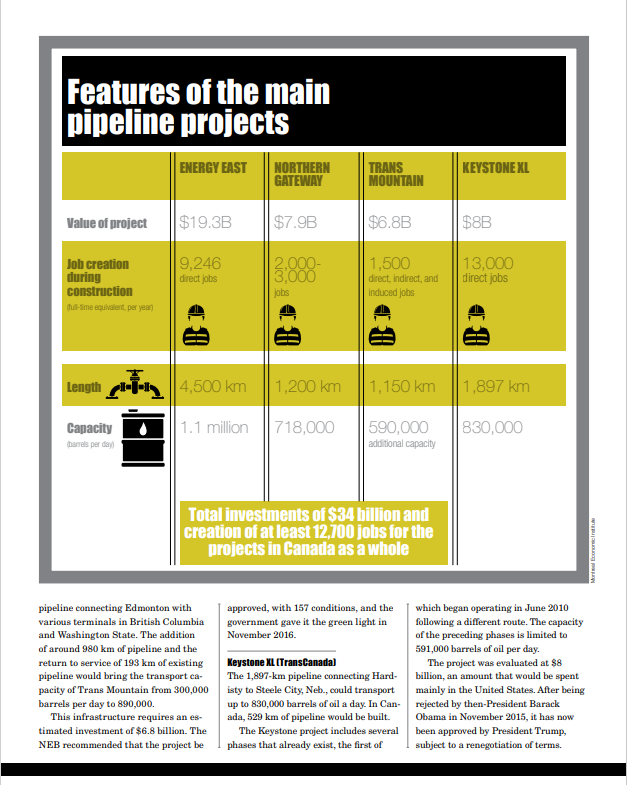 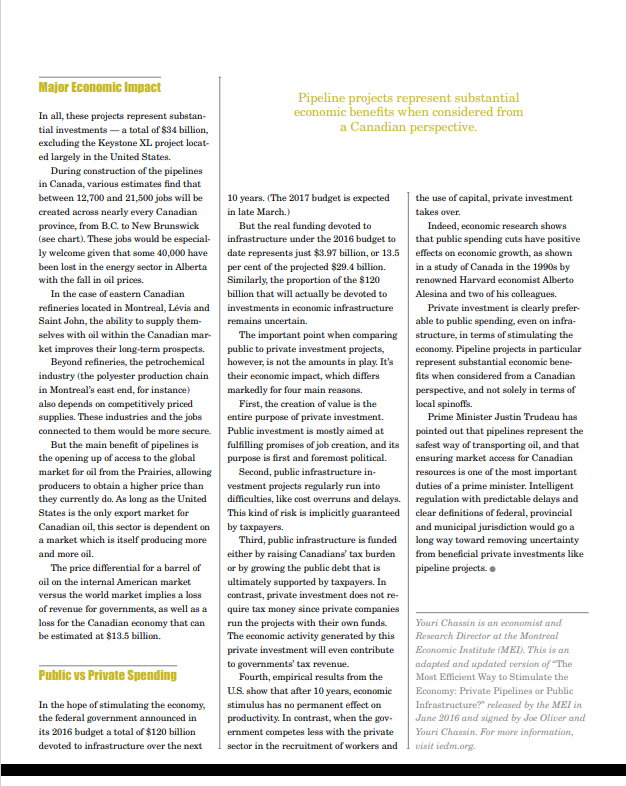