Experimentation proves you can rehab land value and productivity

In a previous article, I mentioned our farm’s experience with less productive land after a pipeline has been trenched through (Figure 1). Work done by Agriculture Canada in Ontario showed yields on the right of way were reduced by half for two years after pipeline installation, and smaller but significant yield losses were noticeable into the fourth year.

The research concluded that soil mixing and compaction on the right of way had negative impacts on crop yields due to the change in the soil chemistry and physical properties.

While we support the implementation of pipelines for the transportation of oil products, we also want to ensure the livelihood of the land and our farm stays strong. To amend the negative effects of pipeline soil disturbance, we’ve recently started to experiment with cover crops and intercrops on our farm, in hopes of improving soil health.

Figure 1: 2017 crop health image of a field with a section of pipeline installed in 2007 running on the north end. (Photo: Farmers Edge) 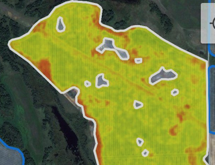 The principle of cover cropping is to plant crops that cover the ground while providing additional benefits. These benefits could include suppression of pests (disease, weeds and insects), increasing biodiversity from soil bacteria and fungi to wildlife, and improving soil quality with organic matter. Cover cropping can seem intimidating, but with adequate research and time, can really improve soil health. Start small, i.e. on the pipeline right-of-way.

What do I want to accomplish: to prevent erosion, fix nitrogen, suppress weeds or break up compaction?

Can I make cover crops work with my cash crop: plant after harvest, inter-seeded, or relay cropping?

Are there any limitations or special requirements: drought, season length, or equipment and technology?

The priorities for our cover crop were to increase organic matter and improve water filtration (compaction) using species that cattle could feed on. The blend consisted of collards, ryegrass, radish and clover and was seeded in mid-July (Figure 2).

Within three weeks of seeding, the ground was covered and the radish roots were the width of a quarter and up to four inches deep.

Figure 2: Cover crops can be used in-season on unseeded acres (top) or under-seeded in-crop. A diverse mix such as the radish, ryegrass, collards, and clover species (below) supply different advantages to the improvement of soil health. 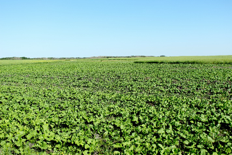 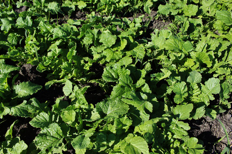 At the time of this writing, we have not done any evaluations of changes in soil health parameters (fertility, organic matter content and water filtration), but it certainly looks better than weeds and exposed soil. Additionally, this land that was once unproductive for crops will now be used as a feed source for 50 cow-calf pairs after harvest of the surrounding crops, further adding value to the farm.

Intercropping is a cropping system that involves growing two or more crops together or in close proximity with each other. There are four types of intercropping: row, strip, mixed, and relay.

Factors to Consider with Intercropping:

Look for compatibility between species: water, fertility and herbicide tolerance.

How will the plants affect each other: out-compete, climb or hold each other up

How easy is it to separate seed?

Phosphorus, potassium and sulphur were applied as recommended by a soil test, but nitrogen application was low to encourage N-fixation in peas. Peas and canola were seeded at 3 bu/ac and 3 lbs/ac, respectively. The two crops compensated for each other in areas that were not best for growth for the other (Figure 3). This made for the best use of space and nutrients in the field.

Figure 3: Peas were able to accelerate in areas with lower fertility with their ability to fix nitrogen from the air, while the canola fared better in areas that were exposed to increased moisture. 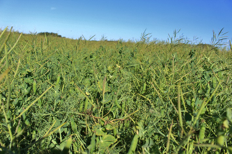 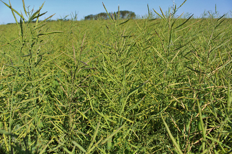 The intercrop had not yet been harvested at the time of this article, but evaluations over the course of the season show significant economic advantages. Minimal in-crop products were used—light fertility and herbicide products only.

As a bonus, it is now difficult to distinguish what part of the field was disturbed by pipeline activity.

Ultimately, a key component to rehabilitating fields after pipeline disturbance is improving soil health. This can be a challenging task that requires proactive planning and some out-of-the-box thinking, but small changes in-crop can be made to build positive changes over time.

For more information, check out some growers: