Give a group of government ‘good old boys’ a look at a couple of acres and they’ll take it all.

The Boyne Lodge personal care home expansion has created controversy in the Manitoba town of Carman, after details emerged that cast doubt on the claim that the Pembina Valley property had to, just had to, be expropriated.

Homeowners Steve and Vicki Hetherington saved carefully and bought wisely with his mother’s former property, the keystone to their retirement plan. The Hetheringtons say the hearing officer stated in the fall hearing that the proposed project only required 3 1/3 acres, and not actually all 7 acres proponents claimed. Now, townsfolk who contributed to the $3.7 M pot have been wondering if they were misled. We spoke with one donor who reflected that concern but asked not to be named to avoid small-town retribution.

"Steve and Vicki are asking for answers, and no one wants to give it to them," says the source.

“People didn’t realize what the true purpose was—banking land,” explains Steve. “We were told, [by] two of them in 2013 [that] sat at our table, we will leave you with 4 acres. It’s snowballed from there.”

Previously, Vicki says they had a cooperative relationship with the town. Past projects include a bridge being built at the rear of their land, drainage for nearby condos and clearing a tree for the walking path.

So, it seemed natural to agree to a survey of the 4 acres to explore the original Boyne Lodge proposal—which included plans for the non-profit to build a new 80-bed lodge, converting the existing facility to 30 waiting beds, as well as offices for the regional health authority (RHA) consolidated onsite.

“There’s all these people standing on our back deck. They surveyed the whole land, not just the 4 acres. I asked (then-Mayor) Bob Mitchell and he acted surprised, ‘I don’t know what they’re doing, and I’ll find out’. That’s the last we saw of him.”

The couple described agreeing to a request to negotiations about the 4 acres, only to be confronted at their kitchen table by project backers and told all 7 acres were going to be taken, no discussion.

The actual plan was based on fundraising a tremendous amount of private money for a campus model, to pressure the provincial government to let the project jump the queue for health care facility funding.

That tactic worked for the Manitoba town of Niverville in 2013. A news story at the time reported “That’s caught the attention of others — including officials from Carman and two other towns,” said Gordon Daman, volunteer president of Heritage Life Personal Care Home and vice-president of Niverville Heritage Holdings Inc., the non-profit board behind the facility’s construction. At the time Damon said, “Future builds will likely very strongly consider the model that’s been developed here.”

The campus plan also included an assisted-living and little-discussed Life-Lease building. Those two additional aspects, not eligible for the RHA funding umbrella, will require private money.

Since the town of Carman is partners with four other municipalities in the project with the Boyne Lodge non-profit, expropriation for all four components was “for the community good,” according to a town official.

Tyler King, economic development officer for the town of Carman, says, “This is a community driven project in collaboration with the Sante Sud Regional Health Authority and the Province. The layout of the components needed more space than were preliminarily looked at.”

The last piece of land that could be developed near the golf course was their objective, representing a legacy project for well-established movers and shakers within an aging farming community sprouting newfound wealth in the last decade.

There were two parcels of land next to the local hospital, with an independent living facility already there, but no one could explain exactly why that option was not suited for building the other two, non RHA-funded components.

When small town “legacy builds” near a golf course are involved, questions about process and decision-making are inconvenient. It was certainly inconvenient when former mayor Mitchell was pressed for answers.

“Alternative sites were looked at but from an economic perspective weren’t viable,” he says, offering no further explanation.

He repeatedly describes the 7 acres as undesirable “bushland” and insists he couldn’t understand why the owners refused to make a deal to sell, despite the fact the Hetheringtons own the only property available on the Boyne River.

Most strange was his description of the status of the process as of February 13 as “murky”.

Why a public official would help initiate an expropriation that could ever be described as “murky”, is hard to comprehend.

Less murky is the fact that the land can be forced from the owners and into the non-profit’s hands via the town—a partner in the project—for far cheaper than buying land at fairly negotiated prices. Land in hand is being counted on to force the province’s hand to open the cashbox, since about $40M total is needed.

“When small town legacy builds near a golf course are involved, questions about process and decision-making are inconvenient.” 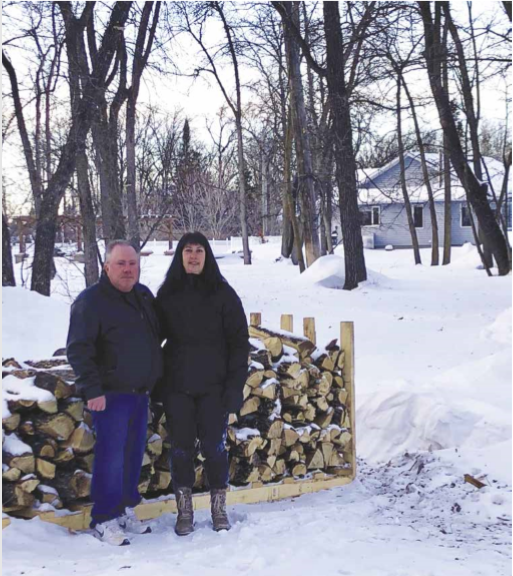 Vicki Hetherington says early on, she called her local Member of the Legislature for Carman, Blaine Pedersen, seeking his assistance in resolving the issue. She says his answer was “so callous.” She couldn’t help but think he was in cahoots with the town officials. “He said, I’m sorry I can’t help you—and you know Vicki, you still own the keys to the car.”

Jurgen Kohler of the BiPole III Landowners Coalition, represented those targeted by the expropriation-minded Manitoba Hydro utility for its’ latest billion-dollar boondoggle. He sees a disturbing pattern with property rights under the Brian Pallister Progressive Conservative government and with Pedersen, now in his second Cabinet post.

“My view is that there aren’t any property rights, that’s the problem. Expropriation is becoming a way of doing business for government—instead of negotiating they use expropriation and there’s no fairness going on. The Hetherington case? It’s right smack in the centre of his riding. It would be interesting to find out why (Pedersen) won’t help them,” Kohler says.

“Blaine used to oppose expropriation. He’s the one that formed our association in the summer of 2013, he told us to fight it but when he became infrastructure minister … in power he distanced himself from us and disappeared. We were convenient when he was in opposition for visibility and then he threw us under the bus.”

In August—before the expropriation hearing was held—[Pipeline Observer] called Pedersen for comment, but it was during a byelection. He refused to do so citing an Elections Manitoba ‘gag order'. Pedersen, now minister of growth, enterprise and trade, was called once again for comment as this story was written, but no response was heard from his office by press time.

“There aren’t any property rights, that’s the problem. Expropriation is becoming a way of doing business for government.” 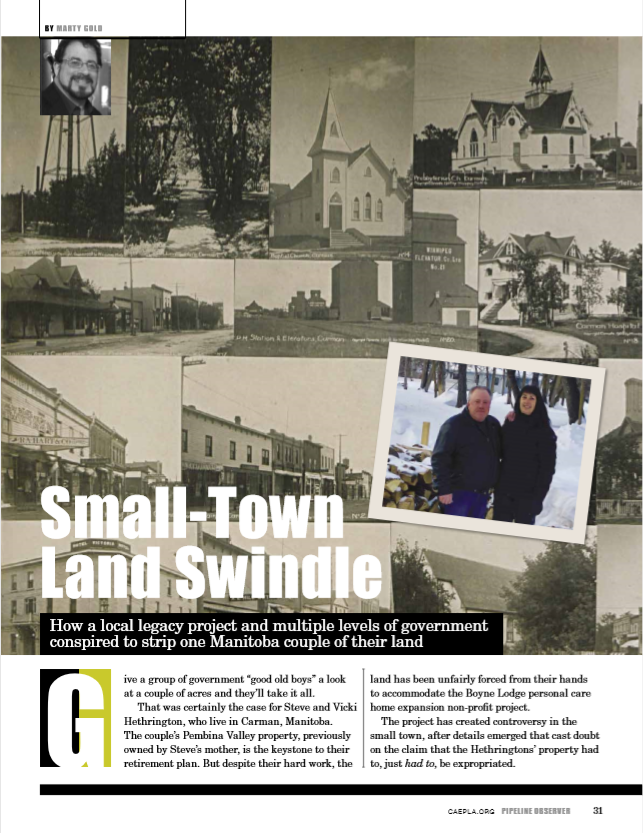 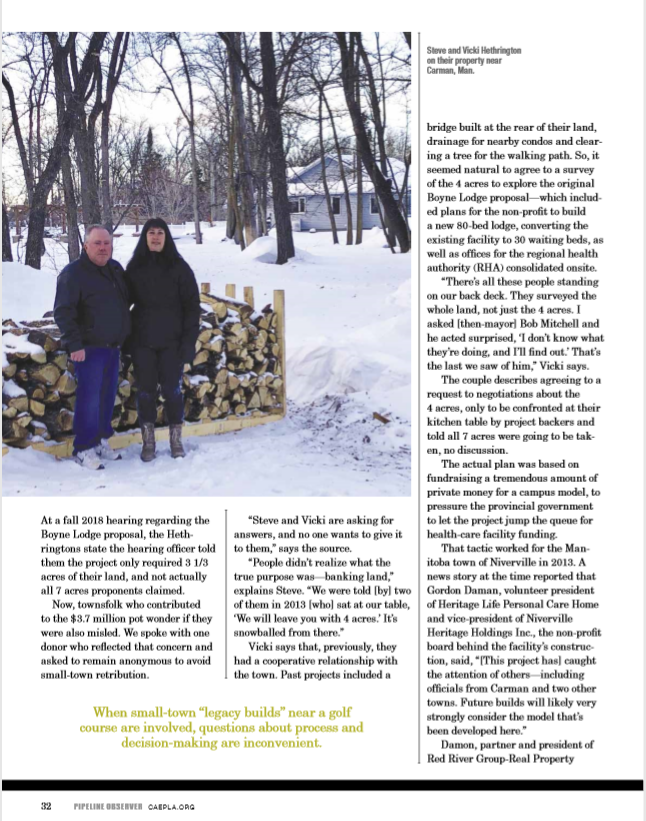 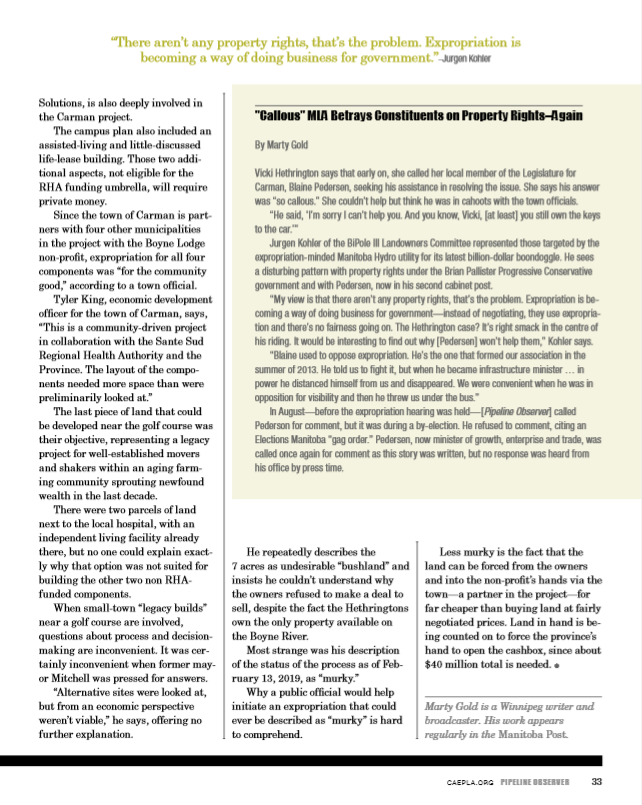