The province is operating bulldozers, with lights blazing and engines roaring, all night on private land with no permission and no agreement in place as it pushes through the Bipole III infrastructure, a Brunkild-area farmer says.

Jurgen Kohler said he is one of about 40 farmers who have not signed agreements but whose land was expropriated by the province in 2014 to pave the way for the continuation of the $2.9-billion Bipole III project, a controversial transmission line down the west side of Lake Winnipeg. 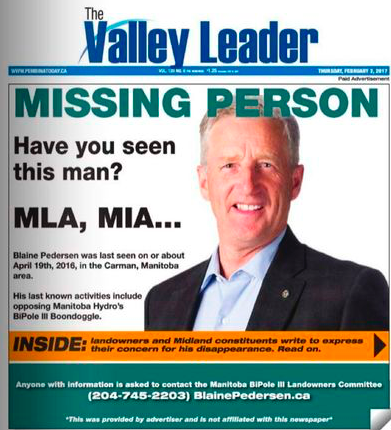 "People are worried, they can't sleep. There's bright lights through the night and they (bulldozers) work around the clock. People are really worried and it's a bad situation," said Kohler, 53, the chairman of a group called the Manitoba Bipole III Landowner Committee, which includes farmers who want to negotiate a business agreement that protects their family farms but can't get the province to the table.

"For us, it's not a compensation issue. It's about property rights, the right to protect your property and to have your concerns addressed, the actual landowners."

Kohler, who has owned his farmland since the 1970s and grows grains and oilseeds, said attempts to negotiate any sort of agreement have failed with both the previous NDP provincial government and the current Tories.

"They just keep bulldozing the land. When you're out here looking at the land, they're just crossing it, going from one field to the next, just going. There's no biosecurity," he said, adding one of his neighbours has diseased land, fraught with club root disease, from contaminants brought in by the heavy construction equipment. "We need the government to simply tell Manitoba Hydro to stay off the land and negotiate a fair agreement and then everybody can go on about their business."

Kohler said the farmers believe they were used as pawns by the Tories to get political traction around the Bipole III issue in order to get elected.

"We're mostly shocked and I, personally, feel used. The new government is not being held accountable to what they campaigned on," he said.

"They (the Tories) also campaigned that if they couldn't reroute Bipole III, they would at least make sure our group would get a chance for fair negotiations with Manitoba Hydro," he said.

So intense is their frustration, members of the Bipole III Landowner Committee placed a newspaper ad in the Feb. 2 edition of Carman's Valley Leader calling out Midland MLA Blaine Pedersen, referring to him as a "missing person," along with an open letter in an effort to get the provincial infrastructure minister to work out an agreement.

"This is an emotional issue and I respect the rights of these landowners to express their continued disappointment in the NDP's decision to route Bipole III down the west side of the province," Pedersen said in an email to the Free Press.

"My duties as an elected member of the legislative assembly are first and foremost to my constituents, who I will continue to serve and ensure that their concerns are heard by the applicable ministry."

Pedersen did not comment on when talks would begin with farmers to address property rights and secure biohazard protection.

Kohler said when Pedersen was a member of the Opposition, he helped farmers organize the Manitoba Bipole III Landowner Committee in 2013. Brian Pallister, before he was premier, attended some of their meetings and rallies and spoke on their behalf in the legislature. But since the Tories have been in power, all that changed.

"This current situation is unbelievable. We've emailed, we've written letters, we've made requests to negotiate," Kohler said, noting there have been no blockades. "We're all peaceful people."

He said a single tower in the Bipole III line has a 42 square-metre footprint on farmland.

When crops such as canola are grown, farmers need aerial application of pesticides and airplanes won't fly near the lines.

A review of the project ordered by the Pallister government last September and conducted by the Manitoba Hydro board of directors and the Boston Consulting Group found 95 per cent of initial cost of Bipole III has already been constructed or committed and it would cost Manitobans $7 billion to stop, change or reroute the line. It also found that the NDP's choice to build on the longer west side of Lake Winnipeg was a mistake that added $900 million to the cost.

"It appears to be almost a $1 billion mistake," Sanford Riley, chairman of the Manitoba Hydro-Electric Board, stated last fall.

The review found the project must continue so the Keeyask Dam's contracts can be honoured and ensure the new generating station is a revenue-producing asset.

Hydro President and CEO Kelvin Shepherd said last fall that Bipole III is 12 to 15 months behind schedule, and its $4.65-billion price tag will likely hit $5 billion.

— with files from Nick Martin